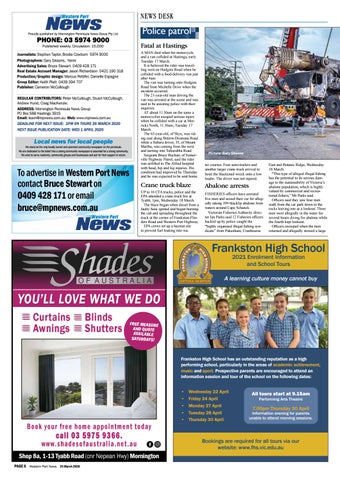 A MAN died when his motorcycle and a van collided at Hastings, early Tuesday 17 March. It is believed the rider was travelling west on Hodgins Road when he collided with a food-delivery van just after 4am. The van was turning onto Hodgins Road from Michelle Drive when the incident occurred. The 21-year-old man driving the van was arrested at the scene and was said to be assisting police with their inquiries. AT about 11.30am on the same a motorcyclist escaped serious injury when he collided with a car at Merricks North, 11.30am, Tuesday 17 March. The 65-year-old, of Skye, was riding east along Bittern-Dromana Road while a Subaru driver, 35, of Mount Martha, was coming from the west and turning into Tubarubba Road. Sergeant Bruce Buchan, of Somerville Highway Patrol, said the rider was airlifted to The Alfred hospital with head, hip and leg injuries. His condition had improved by Thursday and he was expected to be sent home.

To advertise in Western Port News contact Bruce Stewart on 0409 428 171 or email bruce@mpnews.com.au

Crane truck blaze UP to 16 CFA trucks, police and the EPA attended a crane truck fire at Tyabb, 1pm, Wednesday 18 March. The blaze began when diesel from a faulty hose ignited and began burning the cab and spreading throughout the truck at the corner of Frankston-Flinders Road and Western Port Highway. EPA crews set up a hazmat site to prevent fuel leaking into wa-

Picture: Gary Sissons ter courses. Four semi-trailers and another larger crane truck arrived to hoist the blackened wreck onto a low loader. The driver was not injured.

East and Botanic Ridge, Wednesday 18 March. “This type of alleged illegal fishing has the potential to do serious damage to the sustainability of Victoria’s abalone population, which is highly valued by commercial and recreational fishers,” Mr Parks said. Officers said they saw four men walk from the car park down to the rocks leaving one as a lookout. Three men were allegedly in the water for several hours diving for abalone while the fourth kept lookout. Officers swooped when the men returned and allegedly stowed a large

All tours start at 9.15am Performing Arts Theatre

Bookings are required for all tours via our website: www.fhs.vic.edu.au