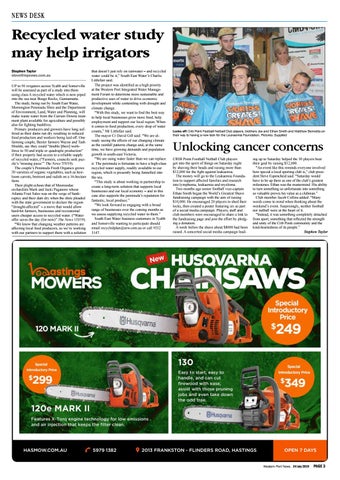 Recycled water study may help irrigators Stephen Taylor steve@mpnews.com.au UP to 50 irrigators across Tyabb and Somerville will be assessed as part of a study into them using class A recycled water which is now piped into the sea near Boags Rocks, Gunnamatta. The study, being run by South East Water, Mornington Peninsula Shire and the Department of Environment, Land, Water and Planning, will make waste water from the Carrum Downs treatment plant available for agriculture and possibly also for fighting bushfires. Primary producers and growers have long suffered as their dams run dry resulting in reduced food production and workers being laid off. One farming couple, Baxter farmers Wayne and Tash Shields, say they could “double [their] workforce to 50 and triple or quadruple production” if their property had access to a reliable supply of recycled water, (“Farmers, councils seek puzzle’s ‘missing piece’” The News 7/5/19). The couple’s Peninsula Fresh Organics grows 50 varieties of organic vegetables, such as heirloom carrots, beetroot and radish on a 16-hectare farm. Their plight echoes that of Moorooduc orchardists Mark and Jacki Paganoni whose Atlanta Fruit Sales was on the verge of bankruptcy and their dam dry when the shire pleaded with the state government to declare the region “drought-affected” – a move that would allow hard-hit farmers, businesses and recreational users cheaper access to recycled water. (“Water offer saves the day (for now)” The News 1/5/19). “We know that changing weather patterns are affecting local food producers, so we’re working with our partners to support them with a solution

that doesn’t just rely on rainwater – and recycled water could be it,” South East Water’s Charlie Littlefair said. The project was identified as a high priority at the Western Port Integrated Water Management Forum to determine more sustainable and productive uses of water to drive economic development while contending with drought and climate change. “With this study, we want to find the best way to help local businesses grow more food, help employment and support our local region. When it comes to food production, every drop of water counts,” Mr Littlefair said. The mayor Cr David Gill said: “We are already seeing the effects of our changing climate as the rainfall patterns change and, at the same time, we have growing demands and population growth in south-east Victoria. “We are using water faster than we can replace it. The peninsula is fortunate to have a high-class recycled water supply, readily available to our region, which is presently being funnelled into the sea. “This study is about working in partnership to create a long-term solution that supports local businesses and our local economy – and in this case also supports the peninsula’s reputation for fantastic, local produce.” “We look forward to engaging with a broad range of businesses over the coming months as we assess supplying recycled water to them.” South East Water business customers in Tyabb and Somerville wanting to participate should email recycledplan@sew.com.au or call 9552 3147.

Locks off: Crib Point Football Netball Club players, brothers Joe and Ethan Smith and Matthew Bennetts on their way to having a new look for the Leukaemia Foundation. Pictures: Supplied

Unlocking cancer concerns CRIB Point Football Netball Club players got into the spirit of things on Saturday night by shaving their heads and raising more than $12,000 for the fight against leukaemia. The money will go to the Leukaemia Foundation to support affected families and research into lymphoma, leukaemia and myeloma. Two months ago senior football vice-captain Ethan Smith began the World’s Greatest Shave fundraising campaign with the aim of raising $10,000. He encouraged 20 players to shed their locks, then created a poster featuring six as part of a social media campaign. Players, staff and club members were encouraged to share a link to the fundraising page and join the effort by pledging a donation. A week before the shave about $8000 had been raised. A concerted social media campaign lead-

ing up to Saturday helped the 30 players beat their goal by raising $12,000. “An event like this reminds everyone involved how special a local sporting club is,” club president Steve Espencheid said. “Saturday would have to be up there as one of the club’s greatest milestones. Ethan was the mastermind. His ability to turn something so unfortunate into something so valuable proves his value as a clubman.” Club member Jacob Collins added: “Many words come to mind when thinking about the weekend’s event. Surprisingly, neither football nor netball were at the heart of it. “Instead, it was something completely detached from sport; something that reflected the strength and unity of the Crib Point community and the kind-heartedness of its people.” Stephen Taylor