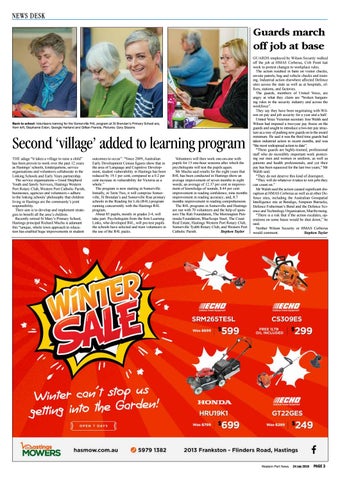 Guards march off job at base

Second ‘village’ added to learning program THE adage “it takes a village to raise a child” has been proven to work over the past 12 years as Hastings’ schools, kindergartens, service organisations and volunteers collaborate in the Linking Schools and Early Years partnership. The service organisations – Good Shepherd Youth and family Services, Hastings Western Port Rotary Club, Western Port Catholic Parish, businesses, agencies and volunteers – adhere to the linking schools’ philosophy that children living in Hastings are the community’s joint responsibility. Their aim is to develop and implement strategies to benefit all the area’s children. Recently retired St Mary’s Primary School, Hastings principal Richard Mucha is adamant this “unique, whole town approach to education has enabled huge improvements in student

outcomes to occur”: “Since 2009, Australian Early Development Census figures show that in the area of Language and Cognitive Development, student vulnerability in Hastings has been reduced by 19.1 per cent, compared to a 0.2 per cent increase in vulnerability for Victoria as a whole.” The program is now starting in Somerville. Initially, in Term Two, it will comprise Somerville, St Brendan’s and Somerville Rise primary schools in the Reading for Life (R4L) program running concurrently with the Hastings R4L program. About 85 pupils, mostly in grades 2-4, will take part. Psychologists from the firm Learning Links, who developed R4L, will pre-test pupils the schools have selected and train volunteers in the use of the R4L packs.

Volunteers will then work one-on-one with pupils for 15 one-hour sessions after which the psychologists will test the pupils again. Mr Mucha said results for the eight years that R4L has been conducted in Hastings show an average improvement of seven months in sight words; an average of 12.37 per cent in improvement of knowledge of sounds; 8.44 per cent improvement in reading confidence; nine months improvement in reading accuracy; and, 8.7 months improvement in reading comprehension. The R4L programs in Somerville and Hastings are run with 70 volunteers and the help of sponsors The Rali Foundation, The Mornington Peninsula Foundation, BlueScope Steel, The Coast Real Estate, Hastings Western Port Rotary Club, Somerville Tyabb Rotary Club, and Western Port Catholic Parish. Stephen Taylor

GUARDS employed by Wilson Security walked off the job at HMAS Cerberus, Crib Point last week to protest changes to workplace rules. The action resulted in bans on visitor checks, on-site patrols, bag and vehicle checks and training. Industrial action elsewhere affected Defence sites across the state as well as at hospitals, offices, stations, and factories. The guards, members of United Voice, are angry at what they claim are “broken bargaining rules in the security industry and across the workforce”. They say they have been negotiating with Wilson on pay and job security for a year and a half. United Voice Victorian secretary Jess Walsh said Wilson had imposed a two-year pay freeze on the guards and sought to introduce a two-tier pay structure as a way of pushing new guards on to the award minimum. He said it was the third time guards had taken industrial action in recent months, and was “the most widespread action to date”. “These guards are highly-trained, professional staff who do incredibly important work protecting our men and women in uniform, as well as patients and health professionals, and yet their pay has been squeezed for the last two years,” Mr Walsh said. “They do not deserve this kind of disrespect. “They will do whatever it takes to win jobs they can count on.” Mr Walsh said the action caused significant disruption at HMAS Cerberus as well as at other Defence sites, including the Australian Geospatial Intelligence site at Bendigo, Simpson Barracks, Defence Fisherman’s Bend and the Defence Science and Technology Organisation, Maribyrnong. “There is a risk that if the action escalates, operations on some bases would be shut down,” he said. Neither Wilson Security or HMAS Cerberus would comment. Stephen Taylor