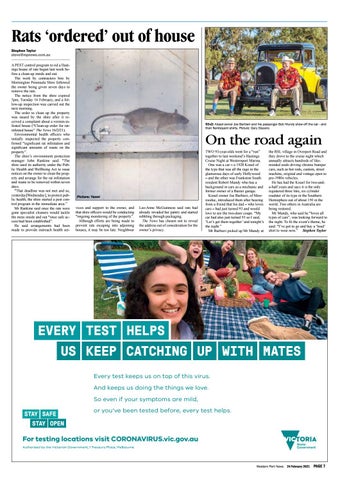 Rats ‘ordered’ out of house Stephen Taylor steve@mpnews.com.au A PEST control program to rid a Hastings house of rats began last week before a clean-up inside and out. The work by contractors hire by Mornington Peninsula Shire followed the owner being given seven days to remove the rats. The notice from the shire expired 5pm, Tuesday 16 February, and a follow-up inspection was carried out the next morning. The order to clean up the property was issued by the shire after it received a complaint about a vermin-infested house (“Clean-up order for ratinfested house” The News 16/2/21). Environmental health officers who initially inspected the property confirmed “significant rat infestation and significant amounts of waste on the property”. The shire’s environment protection manager John Rankine said: “The shire used its authority under the Public Health and Wellbeing Act to issue notices on the owner to clean the property and arrange for the rat infestation and waste to be removed within seven days. “That deadline was not met and so, yesterday[Wednesday], to protect public health, the shire started a pest control program in the immediate area.” Mr Rankine said once the rats were gone specialist cleaners would tackle the mess inside and out “once safe access had been established”. He said arrangements had been made to provide outreach health ser-

On the road again

Picture: Yanni vices and support to the owner, and that shire officers would be conducting “ongoing monitoring of the property”. Although efforts are being made to prevent rats escaping into adjoining houses, it may be too late. Neighbour

Lee-Anne McGuinness said rats had already invaded her pantry and started nibbling through packaging. The News has chosen not to reveal the address out of consideration for the owner’s privacy.

TWO 93-year-olds went for a “run” together to last weekend’s Hastings Cruise Night at Westernport Marina. One was a car – a 1928 Kissel of the type that was all the rage in the glamorous days of early Hollywood – and the other was Frankston South resident Robert Mundy who has a background in cars as a mechanic and former owner of a Baxter garage. Kissel owner Joe Barbieri, of Moorooduc, introduced them after hearing from a friend that his dad – who loves cars – had just turned 93 and would love to see the two-door coupe. “My car had also just turned 93 so I said, ‘Let’s get them together’ and tonight’s the night.” Mr Barbieri picked up Mr Mundy at

the RSL village in Overport Road and they drove to the cruise night which annually attracts hundreds of likeminded souls driving chrome bumper cars, such as hot rods, custom, street machine, original and vintage open to pre-1980s vehicles. He has had the Kissel for two-anda-half years and says it is the only registered three litre, six cylinder roadster of its type in the Southern Hemisphere out of about 150 in the world. Two others in Australia are being restored. Mr Mundy, who said he “loves all types of cars”, was looking forward to the night. To fit the event’s theme, he said: “I’ve got to go and buy a ‘loud’ shirt to wear now.” Stephen Taylor

EVERY TEST HELPS US KEEP CATCHING UP WITH MATES Every test keeps us on top of this virus. And keeps us doing the things we love. So even if your symptoms are mild, or you’ve been tested before, every test helps.