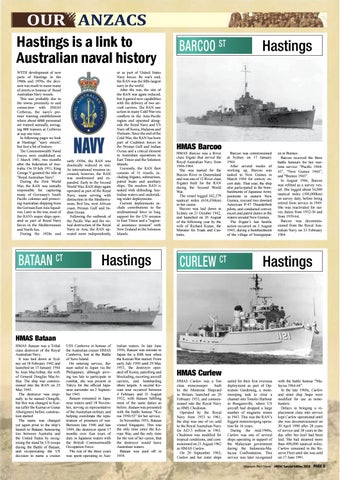 OUR ANZACS Hastings is a link to Australian naval history WITH development of new parts of Hastings in the 1960s and 1970s, the decision was made to name many of streets in honour of Royal Australian Navy vessels. This was probably due to the towns proximity to and connection with HMAS Cerberus, the navy’s premier train­ing establishment where about 6000 personnel are trained annually, averaging 800 trainees at Cerberus at any one time. In following pages we look at Hastings’ “navy streets”, but first a bit of history. The Commonwealth Naval Forces were established on 1 March 1901, two months after the federation of Australia. On 10 July 1911, King George V granted the title of “Royal Australian Navy”. During the First World War, the RAN was initially responsible for capturing many of Germany’s South Pacific colonies and protecting Australian shipping from the German East Asia Squadron. Later in the war, most of the RAN’s major ships operated as part of Royal Navy forces in the Mediterranean and North Sea. During the 1920s and

early 1930s, the RAN was drastically reduced in size. As international tensions increased, however, the RAN was modernised and expanded. Early in the Second World War, RAN ships again operated as part of the Royal Navy, many serving with distinction in the Mediterranean, Red Sea, west African coast, Persian Gulf and Indian Ocean. Following the outbreak of the Pacific War and the virtual destruction of the Royal Navy in Asia, the RAN operated more independently,

or as part of United States Navy forces. By war’s end, the RAN was the fifth-largest navy in the world. After the war, the size of the RAN was again reduced, but it gained new capabilities with the delivery of two aircraft carriers. The RAN saw action in many Cold War-era conflicts in the Asia-Pacific region and operated alongside the Royal Navy and US Navy off Korea, Malaysia and Vietnam. Since the end of the Cold War, the RAN has been part of Coalition forces in the Persian Gulf and Indian Ocean and a critical element in Australian operations in East Timor and the Solomon Islands. Currently, the RAN fleet consists of 51 vessels, including frigates, submarines, patrol boats and auxiliary ships. The modern RAN is tasked with defending Australian waters and undertaking wider deployments. Current deployments include contributions to the multinational force in Iraq, support for the UN mission in East Timor and a “regional assistance mission” with New Zealand in the Solomon Islands.

HMAS Barcoo HMAS Barcoo was a River class frigate that served the Royal Australian Navy from 1944-1964. She was named for the Barcoo River in Queensland and was one of 12 River class frigates built for the RAN during the Second World War. The vessel logged 342,579 nautical miles (634,456km) in her career. Barcoo was laid down in Sydney on 21 October 1942, and launched on 26 August of the following year by the wife of Richard Keane, the Minister for Trade and Customs.

Barcoo was commissioned at Sydney on 17 January 1944. After several weeks of working up, Barcoo was tasked to New Guinea in March 1944 for convoy escort duty. That year, the ship also participated in the bombardments of Japanese Army positions in eastern New Guinea, rescued two downed American P-47 Thunderbolt pilots, and conducted convoy escort and patrol duties in the waters around New Guinea. The frigate’s last hostile action occurred on 3 August 1945, during a bombardment of the village of Soengaipat-

HMAS Bataan HMAS Bataan was a Tribal class destroyer of the Royal Australian Navy. It was laid down at Sydney on 18 February 1942 and launched on 15 January 1944 by Jean MacArthur, the wife of General Douglas MacArthur. The ship was commissioned into the RAN on 25 May 1945. The destroyer was originally to be named Chingilli, but this was changed to Kurnai (after the Kurnai or Gunai Aborigines) before construction started. The name was changed yet again prior to the ship’s launch to Bataan; honouring ties between Australia and the United States by recognising the stand by US troops during the Battle of Bataan, and reciprocating the US decision to name a cruiser

USS Canberra in honour of the Australian cruiser HMAS Canberra, lost at the Battle of Savo Island. On entering service, Ba­ taan sailed to Japan via the Philippines; although arriving too late to participate in combat, she was present in Tokyo for the official Japanese surrender on 2 September 1945. Bataan remained in Japanese waters until 18 November, serving as representative of the Australian military and helping coordinate the repatriation of prisoners of war. Between late 1946 and late 1949, the destroyer spent 17 months over four tours of duty in Japanese waters with the British Commonwealth Occupation Force. The rest of the three years was spent operating in Aus-

tralian waters. In late June 1950, Bataan was enroute to Japan for a fifth tour when the Korean War started. From early July 1950 until 29 May 1951, the destroyer operated off Korea; patrolling and blockading, escorting aircraft carriers, and bombarding shore targets. A second Korean tour occurred between 4 February and 31 August 1952, with Bataan fufilling most of the same duties as before. Bataan was presented with the battle honour “Korea 1950-52” for her service. In November 1953, Bataan visited Singapore. This was the only time since the Korean War, and the only time for the rest of her career, that the destroyer would leave Australian waters. Bataan was paid off in 1954.

HMAS Curlew HMAS Curlew was a Ton class minesweeper built by the Montrose Shipyard in Britain, launched on 20 February 1953, and commissioned into the Royal Navy as HMS Chediston. Operated by the Royal Navy from 1953 to 1961, the ship was one of six sold to the Royal Australian Navy for A£5.5 million in 1961. Chediston was modified for tropical conditions, and commissioned on 21 August 1962 as HMAS Curlew. On 20 September 1963, Curlew and her sister ships

sailed for their first overseas deployment as part of Operation Gardening, a minesweeping task to clear a channel into Tonolei Harbour in Bougainville, where US aircraft had dropped a large number of magnetic mines in 1943. This was the RAN’s biggest minesweeping operation for 16 years. During the mid-1960s, Curlew was one of several ships operating in support of the Malaysian government during the Indonesia-Malaysia Confrontation. This ser­vice was later recognised

with the battle honour “Malaysia 1964-66”. In the late 1960s, Curlew and sister ship Snipe were modified for use as minehunters. Delays in bringing a replacement class into service kept Curlew operational until she was decommissioned on 30 April 1990 after 28 years of service and 38 years to the day after her keel had been laid. She had steamed more than 400,000 nautical miles. Curlew remained in the Reserve Fleet until she was sold on 17 June 1991.