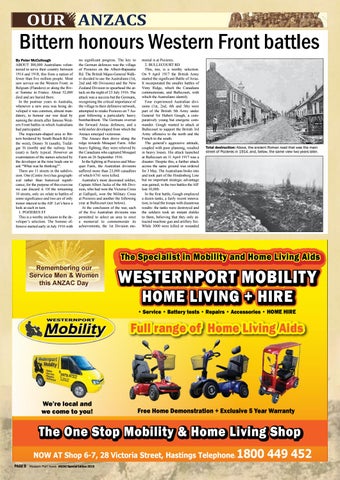 Bittern honours Western Front battles By Peter McCullough ABOUT 300,000 Australians volunteered to serve their country between 1914 and 1918; this from a nation of fewer than five million people. Most saw service on the Western Front: in Belgium (Flanders) or along the River Somme in France. About 52,000 died and are buried there. In the postwar years in Australia, whenever a new area was being developed it was common, almost mandatory, to honour our war dead by naming the streets after famous Western Front battles in which Australians had participated. The trapezium-shaped area in Bittern bordered by South Beach Rd (to the west), Disney St (south), Trafalgar St (north) and the railway line (east) is fairly typical. However an examination of the names selected by the developer at the time leads one to ask “What was he thinking?”. There are 11 streets in the subdivision. One (Centre Ave) has geographical rather than historical significance; for the purpose of this exercise we can discard it. Of the remaining 10 streets, only six relate to battles of some significance and two are of only minor interest to the AIF. Let’s have a look at each in turn. 1. POZIERES ST This is a worthy inclusion in the developer’s selection. The Somme offensive started early in July 1916 with

no significant progress. The key to the German defences was the village of Pozieres on the Albert-Bapaume Rd. The British Major-General Walker decided to use the Australians (1st, 2nd and 4th Divisions) and the New Zealand Division to spearhead the attack on the night of 23 July 1916. The attack was a success but the Germans, recognising the critical importance of the village to their defensive network, attempted to retake Pozieres on 7 August following a particularly heavy bombardment. The Germans overran the forward Anzac defences, and a wild melee developed from which the Anzacs emerged victorious. The Anzacs then drove along the ridge towards Mouquet Farm. After heavy fighting, they were relieved by the Canadians who captured Mouquet Farm on 26 September 1916. In the fighting at Pozieres and Mouquet Farm, the Australian divisions suffered more than 23,000 casualties of which 6741 were killed. Australia’s most decorated soldier, Captain Albert Jacka of the 4th Division, who had won the Victoria Cross at Gallipoli, won the Military Cross at Pozieres and another the following year at Bullecourt (see below). At the conclusion of the war, each of the five Australian divisions was permitted to select an area to erect a memorial to commemorate its achievements; the 1st Division me-

morial is at Pozieres. 2. BULLECOURT RD This, too, is a worthy selection. On 9 April 1917 the British Army started the significant Battle of Arras. It incorporated the smaller battles of Vimy Ridge, which the Canadians commemorate, and Bullecourt, with which the Australians identify. Four experienced Australian divisions (1st, 2nd, 4th and 5th) were part of the British 5th Army under General Sir Hubert Gough, a comparatively young but energetic commander. Gough wanted to attack at Bullecourt to support the British 3rd Army offensive to the north and the French to the south. The general’s aggressive attitude, coupled with poor planning, resulted in heavy losses. His attack launched at Bullecourt on 11 April 1917 was a disaster. Despite this, a further attack across the same ground was ordered for 3 May. The Australians broke into and took part of the Hindenberg Line but no important strategic advantage was gained; in the two battles the AIF lost 10,000. In the first battle, Gough employed a dozen tanks, a fairly recent innovation, to lead the troops with disastrous results: the tanks were destroyed and the soldiers took an instant dislike to them, believing that they only attracted machine gun and artillery fire. While 3000 were killed or wounded

Total destruction: Above, the ancient Roman road that was the main street of Pozieres in 1914, and, below, the same view two years later.

We’re local and we come to you!