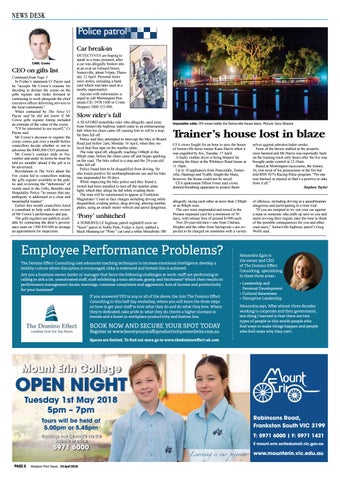 CEO on gifts list Continued from Page 3 In Friday’s statement Cr Payne said he “accepts Mr Cowie’s reasons for deciding to declare the cruise on the gifts register and looks forward to continuing to work alongside the chief executive officer delivering services to the local community”. When contacted by The News Cr Payne said he did not know if Mr Cowie gifts register listing included an estimate of the value of the cruise. “I’ll be interested to see myself,” Cr Payne said. Mr Cowie’s decision to register the cruise comes just over a month before councillors decide whether or not to advertise the $400,000 CEO position. Mr Cowie’s contract ends in November and under its terms he must be told six months’ ahead if the job is to be advertised. Revelations in The News about the Fox cruise led to councillors making the gifts register available to the public and reviewing the “definitions” of words used in the Gifts, Benefits and Hospitality Policy “to ensure that any ambiguity is addressed in a clear and meaningful manner”. Earlier this month councillors hired a consultant to help with their review of Mr Cowie’s performance and pay. The gifts registers are publicly available by contacting the shire’s governance team on 1300 850 600 to arrange an appointment for inspection.

DETECTIVES are hoping to speak to a man, pictured, after a car was allegedly broken into at an oval on Edward Street, Somerville, about 5-6pm, Thursday 12 April. Personal items were stolen, including a bank card which was later used at a nearby supermarket. Anyone with information is urged to call Mornington Peninsula CIU 5978 1400 or Crime Stoppers 1800 333 000.

Slow rider’s fall A SEAFORD motorbike rider who allegedly sped away from Somerville highway patrol came to an embarrassing halt when his chain came off causing him to roll to a stop. He then fell off. Police said they attempted to intercept the bike in Brunel Road just before 2am, Monday 16 April, when they noticed that blue tape on the number plate. The rider sped off, allegedly reaching 148kph in the 60kph zone, before the chain came off and began sparking on the road. The bike rolled to a stop and the 29-year-old rider fell off. Police found him to be disqualified from driving. He also tested positive for methamphetamine use and his bike was impounded for 30 days. While inspecting the bike police said they found a switch had been installed to turn off the number plate light, which they allege he did while evading them. The man will be summonsed to appear at Frankston Magistrates’ Court to face charges including driving while disqualified, evading police, drug driving, altering number plates, using an unsafe motor vehicle and speed dangerous.

Trainer’s house lost in blaze CFA crews fought for an hour to save the house of Somerville horse trainer Kane Harris when it was engulfed by fire, Tuesday 17 April. A faulty clothes dryer is being blamed for starting the blaze at the Whitneys Road house at 11.10pm. Up to 10 appliances from Pearcedale, Somerville, Hastings and Tyabb, fought the blaze, however, the house could not be saved. CFA spokesman Dillon Foote said crews donned breathing apparatus to protect them-

selves against asbestos-laden smoke. None of the horses stabled at the property were harmed and Mr Harris was reportedly back on the training track only hours after the fire was brought under control at 12.10am. Based at Mornington racecourse, the trainer, 36, lost most of his possessions in the fire but told RSN 927's Racing Pulse program: “No one was harmed or injured so that’s a positive to take from it all.” Stephen Taylor

allegedly racing each other at more than 130kph in an 80kph zone. The cars were impounded and towed to the Preston impound yard for a minimum of 30 days, with release fees of around $1000 each. Two 20-year-old men – one from Chelsea Heights and the other from Springvale – are expected to be charged on summons with a variety

of offences, including driving at a speed/manner dangerous and participating in a time trial. “If you are tempted to try out your car against a mate or someone who pulls up next to you and starts revving their engine, take the time to think of the possible consequences for you and other road users,” Somerville highway patrol’s Greg Wolfe said.

Employee Performance Problems? The Domino Effect Consulting uses advanced coaching techniques to increase emotional intelligence, develop a healthy culture where disruption is encouraged, risky is embraced and bottom line is achieved. Are you a business owner, leader or manager that faces the following challenges at work: staff not performing or calling in sick a lot, unmotivated staff, staff exhibiting a toxic attitude, gossip and bitchiness? Which then results in: performance management issues, warnings, customer complaints and aggression, loss of income and productivity for your business? If you answered YES to any or all of the above, the Join The Domino Effect Consulting in this half day workshop, where you will learn the three steps on how to get your staff to love what they do and do what they love. Where they’re dedicated, take pride in what they do, there’s a higher increase in morale and a boost in workplace productivity and bottom line.

BOOK NOW AND SECURE YOUR SPOT TODAY Register at www.boostyourstaffsproductivity.eventbrite.com.au

Alexandra Egan is the owner and CEO of The Domino Effect Consulting, specializing in these three areas : • Leadership and Personal Development • Cultural Awareness • Disruptive Leadership Alexandra says, ‘After almost three decades working in corporate and then government, one thing I learned is that there are two types of people in this world; people who find ways to make things happen and people who find ways why they can’t.

Spaces are limited. To find out more go to www.thedominoeffect-ak.com