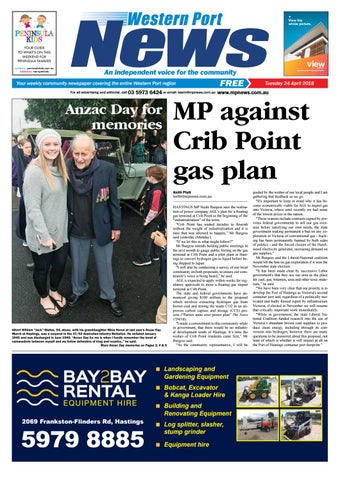 Albert William “Jack” Walles, 94, above, with his granddaughter Nikia Heron at last year’s Anzac Day March at Hastings, was a corporal in the 37/52 Australian Infantry Battalion. He enlisted January 1945 and was discharged in June 1946. “Anzac Day for me is when I fondly remember the bond of camaraderie between myself and my fellow defenders of king and country.,” he said. More Anzac Day memories on Pages 3, 4 & 5

HASTINGS MP Neale Burgess sees the realisation of power company AGL’s plan for a floating gas terminal at Crib Point as the beginning of the “industrialisation” of the town. “Crib Point has waited decades to flourish without the weight of industrialisation and it is time that was allowed to happen,” Mr Burgess said yesterday (Monday). “If we let this in what might follow?” Mr Burgess intends holding public meetings in the next month to gauge public feeling on the gas terminal at Crib Point and a pilot plant at Hastings to convert hydrogen gas to liquid before being shipped to Japan. “I will also be conducting a survey of our local community on both proposals, to ensure our community's voice is being heard,” he said. AGL is expected to apply within weeks for regulatory approvals to moor a floating gas import terminal at Crib Point. The state and federal governments have announced giving $100 million to the proposal which involves extracting hydrogen gas from brown coal and storing the waste CO2 in an unproven carbon capture and storage (CCS) process (“Parties unite over power plan” The News 17/4/18). “I made a commitment to this community while in government, that there would be no industrial development south of Hastings. It’s time the wishes of Crib Point residents came first,” Mr Burgess said. “As the community representative, I will be

guided by the wishes of our local people and I am gathering that feedback as we go. “It's important to keep in mind why it has become economically viable for AGL to import gas into Victoria, where until recently we had some of the lowest prices in the nation. “These reasons include contracts signed by previous federal governments to sell our gas overseas before satisfying our own needs, the state government making permanent a ban on any exploration in Victoria of conventional gas - fracking has been permanently banned by both sides of politics - and the forced closure of the Hazelwood electricity generator, increasing demand on gas supplies.” Mr Burgess said the Liberal-National coalition would lift the ban on gas exploration if it won the November state election. “It has been made clear by successive Labor government's that they see our area as the place for coal, gas, bitumen, urea and other toxic materials,” he said. “We have been very clear that our priority is to develop the Port of Hastings as Victoria's second container port and, regardless of a politically motivated and badly flawed report by infrastructure Victoria, if elected in November we will resume that critically important work immediately. “While in government, the state Liberal National Coalition funded research into the use of Victoria’s abundant brown coal supplies to produce clean energy, including through its conversion into hydrogen; however there are many questions to be answered about this proposal, not least of which is whether it will impact at all on the Port of Hastings container port footprint.”