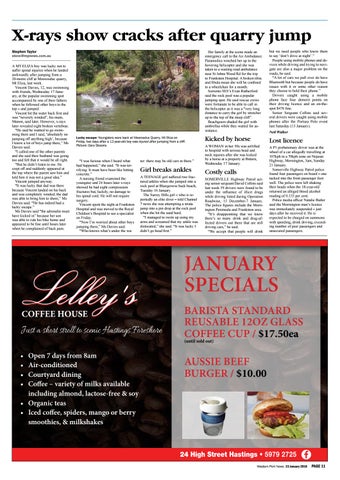 X-rays show cracks after quarry jump Stephen Taylor steve@mpnews.com.au A MT ELIZA boy was lucky not to suffer spinal injuries when he landed awkwardly after jumping from a 20-metre cliff at Moorooduc quarry, Mt Eliza, last week. Vincent Davies, 12, was swimming with friends, Wednesday 17 January, at the popular swimming spot accompanied by one of their fathers when he followed other boys to the top – and jumped. Vincent hit the water back first and was “severely winded”, his mum, Manon, said later. However, x-rays later revealed eight broken vertebrae. “He said he wanted to go swimming there and I said, ‘absolutely no jumping off anything high’, because I know a lot of boys jump there,” Ms Davies said. “I called one of the other parents and she said their husband was going too and felt that it would be all right. “But he didn’t listen to me. He crept off and suddenly appeared at the top where the parent saw him and told him it was not a good idea.” Vincent jumped anyway. “It was lucky that dad was there because Vincent landed on his back and was completely winded; the dad was able to bring him to shore,” Ms Davies said. “He has indeed had a lucky escape.” Ms Davies said “the adrenalin must have kicked in” because her son was able to ride his bike home and appeared to be fine until hours later when he complained of back pain.

Lucky escape: Youngsters were back at Moorooduc Quarry, Mt Eliza on Friday, two days after a 12-year-old boy was injured after jumping from a cliff. Picture: Gary Sissons

“I was furious when I heard what had happened,” she said. “It was terrifying. It must have been like hitting concrete.” A nursing friend examined the youngster and 24 hours later x-rays showed he had eight compression fractures but, luckily, no damage to his spinal cord. He will not require surgery. Vincent spent the night at Frankston Hospital and was moved to the Royal Children’s Hospital to see a specialist on Friday. “Now I’m worried about other boys jumping there,” Ms Davies said. “Who knows what’s under the wa-

ter: there may be old cars in there.”

Girl breaks ankles A TEENAGE girl suffered two fractured ankles when she jumped into a rock pool at Blairgowrie back beach, Tuesday 16 January. The Surrey Hills girl – who is reportedly an elite diver – told Channel 7 news she was attempting a strata jump into a pin drop at the rock pool when she hit the sand hard. “I managed to swim up using my arms and screamed that my ankle was dislocated,” she said. “It was lucky I didn’t go head first.”

Her family at the scene made an emergency call to the Air Ambulance. Paramedics winched her up to the hovering helicopter and she was taken to a waiting road ambulance near St Johns Wood Rd for the trip to Frankston Hospital. A broken tibia and fibula mean she will be confined to a wheelchair for a month. Sorrento SES’s Evan Rutherford said the rock pool was a popular jumping spot. He said rescue crews were fortunate to be able to call in the helicopter as it was a “very long distance to carry the girl by stretcher up to the top of the steep cliff”. Beachgoers shaded the girl with umbrellas while they waited for assistance.

but we need people who know them to say ‘don’t drive at night’.” People using mobile phones and devices while driving and trying to navigate are also a major problem on the roads, he said. “A lot of cars we pull over do have Bluetooth but because people do have issues with it or some other reason they choose to hold their phone.” Drivers caught using a mobile phone face four demerit points on their driving licence and an on-thespot $476 fine. Senior Sergeant Collins said several drivers were caught using mobile phones after the Portsea Polo event last Saturday (13 January).

A WOMAN in her 50s was airlifted to hospital with serious head and neck injuries after she was kicked by a horse at a property at Bittern, Wednesday 17 January.

Costly calls SOMERVILLE Highway Patrol acting senior sergeant David Collins said last week 59 drivers were found to be under the influence of illicit drugs while driving listed during Operation Roadwise, 15 December-7 January. The police figures include the Mornington Peninsula and Frankston area. “It’s disappointing that we know there’s so many drink and drug-affected drivers out there that are still driving cars,” he said. “We accept that people will drink

A P1 probationary driver was at the wheel of a car allegedly travelling at 107kph in a 70kph zone on Nepean Highway, Mornington, 3am, Sunday 21 January. Somerville Highway Patrol police found four passengers on board – one tucked into the front passenger foot well. The police were left shaking their heads when the 18-year-old returned an alleged blood alcohol reading of 0.155 per cent. Police media officer Natalie Butler said the Mornington man’s licence was immediately suspended – just days after he received it. He is expected to be charged on summons with speeding, drink driving, exceeding number of peer passengers and unsecured passengers.