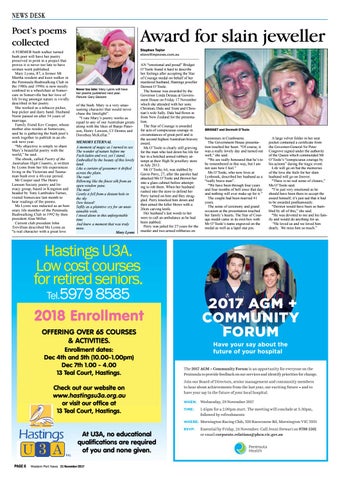 Poet’s poems collected A FORMER bush walker turned bush poet will have her poetry preserved in print in a project that proves it is never too late to have written work published. Mary Lyons, 87, a former Mt Martha resident and keen walker in the Peninsula Bushwalking Club in the 1980s and 1990s is now mostly confined to a wheelchair at Somercare in Somerville but her love of life living amongst nature is vividly described in her poetry. She worked as a tobacco picker, hop picker and dairy hand. Husband Norm passed on after 54 years of marriage. Family friend Kev Cooper, whose mother also resides at Somercare, said he is gathering the bush poet’s work together to publish in an ebook next year. “My objective is simply to share Mary’s beautiful poetry with the world,” he said. The ebook, called Poetry of the Australian High Country, is written by Lyons from her life experiences living in the Victorian and Tasmanian bush over a 40-year period. Mr Cooper said The Henry Lawson Society poetry and literacy group, based in Kingston and headed by Tony Lambides-Turner, visited Somercare last month to hear readings of the poems. Ms Lyons was inducted as an honorary life member of the Peninsula Bushwalking Club in 1992 by then president Alan Miller. Current club president John Trevillian described Ms Lyons as “a real character with a great love

Never too late: Mary Lyons will have her poems published next year. Picture: Gary Sissons

of the bush. Mary is a very unassuming character that would never chase the limelight”. “I rate Mary’s poetry works as equal to any of our Australian greats along with the likes of Banjo Paterson, Henry Lawson, CJ Dennis and Dorothea McKellar.” MEMORY ETERNAL A moment of magic as I turned to see The wonder of nature before me Pack-laden and wet, yet I stand, Enthralled by the beauty of this lovely land. Like a curtain of gossamer it drifted across the plain. The rain! Billowing like the finest silk from an open window pane. The mist! Gently it fell from a distant hole in the sky Dew kissed! Softly as a plaintive cry for an unattainable wish, I stood alone in this unforgettable time And knew a moment that was truly mine. Mary Lyons

AN “emotional and proud” Bridget O’Toole found it hard to describe her feelings after accepting the Star of Courage medal on behalf of her murdered husband, Hastings jeweller Dermot O’Toole. The honour was awarded by the Governor Linda Dessau at Government House on Friday 17 November which she attended with her sons Christian, Dale and Trent and Christian’s wife Sally. Dale had flown in from New Zealand for the presentation. The Star of Courage is awarded for acts of conspicuous courage in circumstances of great peril and is the second highest Australian bravery award. Ms O’Toole is clearly still grieving for the man who laid down his life for her in a botched armed robbery attempt at their High St jewellery store in July 2013. Mr O’Toole, 64, was stabbed by Gavin Perry, 27, after the parolee had attacked Ms O’Toole and thrown her into a glass cabinet before attempting to rob them. When her husband rushed into the store to defend her Perry turned on him and they struggled. Perry knocked him down and then aimed the killer blows with a 20cm carving knife. Her husband’s last words to her were to call an ambulance as he had been stabbed. Perry was jailed for 27 years for the murder and two armed robberies on

businesses in Cranbourne. The Government House presentation touched her heart. “Of course, it was a really lovely day and turned out well,” she said. “We are really honoured that he’s to be remembered in this way, but I am not sure how I feel.” Ms O’Toole, who now lives at Lynbrook, described her husband as a “really brave man”. “We have been through four years and four months of hell since that day and nothing will ever make up for it.” The couple had been married 41 years. The sense of ceremony and grand occasion at the presentation touched her family’s hearts. The Star of Courage medal came in its own box with Mr O’Toole’s name engraved on the medal as well as a lapel star pin.

A large velvet folder in her seat pocket contained a certificate from the Governor-General Sir Peter Cosgrove signed under the authority of the Queen which commended Mr O’Toole’s “conspicuous courage by his actions” during the tragic event. Life will go on but the memories of the love she feels for her slain husband will go on forever. “There is no real sense of closure,” Ms O’Toole said. “I’m just very emotional as he should have been there to accept the award himself; it’s just sad that it had to be awarded posthumously. “Dermot would have been so humbled by all of this,” she said. “He was devoted to me and his family and would do anything for us. “He loved us and we loved him dearly. We miss him so much.”

OVER 65 COURSES A wideOFFERING range of courses and activities are available.

Have your say about the future of your hospital

The 2017 AGM + Community Forum is an opportunity for everyone on the Peninsula to provide feedback on our services and identify priorities for change. Join our Board of Directors, senior management and community members to hear about achievements from the last year, our exciting future – and to have your say in the future of your local hospital. WHEN: