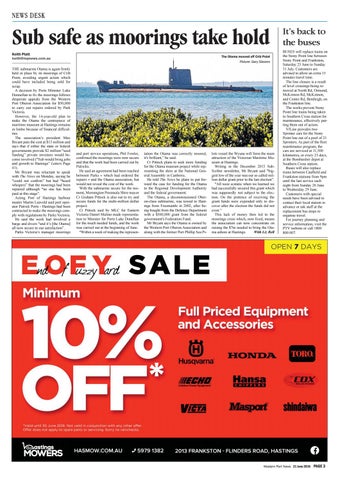 Sub safe as moorings take hold Keith Platt keith@mpnews.com.au THE submarine Otama is again firmly held in place by its moorings of Crib Point, avoiding urgent action which could have included being sold for scrap. A decision by Ports Minister Luke Donnellan to fix the moorings follows desperate appeals from the Western Port Oberon Association for $50,000 to carry out repairs ordered by Park Victoria. However, the 14-year-old plan to make the Otama the centrepiece of maritime museum at Hastings remains in limbo because of financial difficulties. The association’s president Max Bryant puts the cost at $15 million and says that if either the state or federal governments provide $2 million “seed funding” private investors would become involved (“Sub would bring jobs and growth to Hastings” Letters Page 41). Mr Bryant was reluctant to speak with The News on Monday, saying he “could not confirm” but had “heard whispers” that the moorings had been repaired although “no one has been paid at this stage”. Acting Port of Hastings harbour master Martin Leavold said port operator Patrick Ports - Hastings had been contracted to make the moorings comply with regulations by Parks Victoria. He said the work had involved a barge and divers “and it’s [the Otama] all now secure to our satisfaction”. Parks Victoria’s manager moorings

and port service operations, Phil Fowler, confirmed the moorings were now secure and that the work had been carried out by Patricks. He said an agreement had been reached between Parks – which had ordered the repairs – and the Otama association, but would not reveal the cost of the work. With the submarine secure for the moment, Mornington Peninsula Shire mayor Cr Graham Pittock is also out to try and secure funds for the multi-million dollar project. Cr Pittock said by MLC for Eastern Victoria Daniel Mulino made representation to Minister for Ports Luke Donellan for the much needed funds, and the work was carried out at the beginning of June. “Within a week of making the represen-

tation the Otama was correctly moored, it's brilliant,” he said. Cr Pittock plans to seek more funding for the Otama museum project while representing the shire at the National General Assembly in Canberra. He told The News he plans to put forward the case for funding for the Otama to the Regional Development Authority and the federal government. The Otama, a decommissioned Oberon-class submarine, was towed to Hastings from Freemantle in 2002, after being bought from the Defence Department with a $500,000 grant from the federal government's Federation Fund. Mr Bryant says the Otama is owned by the Western Port Oberon Association and along with the former Port Phillip Sea Pi-

lots vessel the Wyuna will form the main attraction of the Victorian Maritime Museum at Hastings. Writing in the December 2015 SubScriber newsletter, Mr Bryant said “biggest low of the year was our so called million dollar grant prior to the last election”. “All were ecstatic when we learned we had successfully secured this grant which was supposedly not subject to the election. On the pretence of receiving the grant funds were expended only to discover after the election the funds did not exist.” This lack of money then led to the moorings crisis which, now fixed, means the association can now concentrate on raising the $7m needed to bring the Otama ashore at Hastings. With Liz Bell

It’s back to the buses BUSES will replace trains on the Stony Point line between Stony Point and Frankston, Saturday 25 June to Sunday 31 July. Customers are advised to allow an extra 15 minutes travel time. The line closure is a result of level crossings being removed at North Rd, Ormond, McKinnon Rd, McKinnon, and Centre Rd, Bentleigh, on the Frankston line. The works prevent Stony Point line trains being taken to Southern Cross station for maintenance, effectively putting them out of action. V/Line provides two Sprinter cars for the Stony Point line out of a pool of 21 Sprinters. As part of the fleet maintenance program, the cars are serviced at 11,500 kilometres, or every 23 days, at the Bombardier depot at Southern Cross station. Buses will also replace trains between Caulfield and Frankston stations from 9pm until the last service each night from Sunday 26 June to Wednesday 29 June. Customers with special needs have been advised to contact their local station in advance or ask staff at the replacement bus stops to organise travel. For journey planning and service information, visit the PTV website or call 1800 800 007.