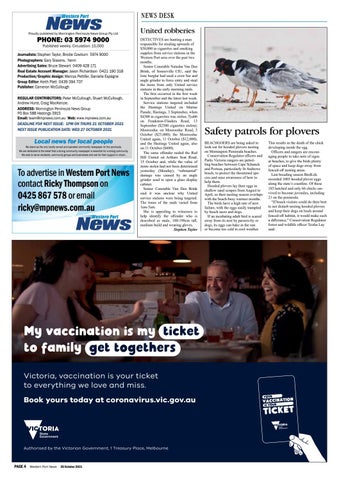 United robberies DETECTIVES are hunting a man responsible for stealing upwards of $50,000 in cigarettes and smoking supplies from service stations in the Western Port area over the past two months. Senior Constable Natasha Van Den Brink, of Somerville CIU, said the lone burglar had used a crow bar and angle grinder to force entry and steal the items from only United service stations in the early morning raids. The first occurred in the first week in September and the latest last week. Service stations targeted included the Hastings United on Marine Parade, Hastings, 3 September, when $4300 in cigarettes was stolen; Tyabb on Frankston-Flinders Road, 13 September ($2500 cigarettes stolen); Moorooduc on Moorooduc Road, 3 October ($25,000); the Moorooduc United again, 11 October ($12,000); and the Hastings United again, also on 11 October ($600). The same offender raided the Red Hill United on Arthurs Seat Road, 15 October and, while the value of items stolen had not been determined yesterday (Monday), “substantial” damage was caused by an angle grinder used to open a glass display cabinet. Senior Constable Van Den Brink said it was unclear why United service stations were being targeted. The times of the raids varied from 1am-5am. She is appealing to witnesses to help identify the offender who is described as male, 180-190cm tall, medium build and wearing gloves. Stephen Taylor

Safety patrols for plovers BEACHGOERS are being asked to look out for hooded plovers nesting on Mornington Peninsula beaches. Conservation Regulator officers and Parks Victoria rangers are patrolling beaches between Cape Schanck and Portsea, particularly St Andrews beach, to protect the threatened species and raise awareness of how to help them. Hooded plovers lay their eggs in shallow sand scrapes from August to April, so their nesting season overlaps with the beach-busy warmer months. The birds have a high rate of nest failure, with the eggs easily trampled by beach users and dogs. If an incubating adult bird is scared away from its nest by passers-by or dogs, its eggs can bake in the sun or become too cold in cool weather.

This results in the death of the chick developing inside the egg. Officers and rangers are encouraging people to take note of signs at beaches, to give the birds plenty of space and keep dogs away from fenced-off nesting areas. Last breeding season BirdLife recorded 1003 hooded plover eggs along the state’s coastline. Of these 185 hatched and only 66 chicks survived to become juveniles, including 21 on the peninsula. “If beach visitors could do their best to not disturb nesting hooded plovers and keep their dogs on leads around fenced-off habitat, it would make such a difference,” Conservation Regulator forest and wildlife officer Teisha Lay said.