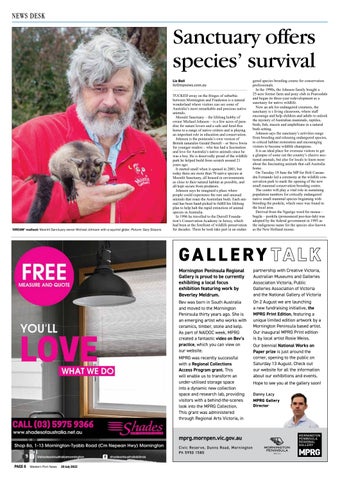 TUCKED away on the fringes of suburbia between Mornington and Frankston is a natural wonderland where visitors can see some of Australia’s most remarkable and precious native animals. Moonlit Sanctuary – the lifelong hobby of owner Michael Johnson – is a few acres of paradise for nature lovers and a safe and feral-free home to a range of native critters and is playing an important role in education and conservation. Johnson is the peninsula’s own version of British naturalist Gerald Durrell – or Steve Irwin for younger readers – who has had a fascination and love for Australia’s native animals since he was a boy. He is deservedly proud of the wildlife park he helped build from scratch around 21 years ago. It started small when it opened in 2001, but today there are more than 70 native species at Moonlit Sanctuary, all housed in environments as close to their natural habitat as possible, and all kept secure from predators. Johnson says he imagined a place where people could experience the rare and unusual animals that roam the Australian bush. Each animal has been hand-picked to fulfill his lifelong plan to help halt the rapid extinction of animal species in Australia. In 1996 he travelled to the Durrell Foundation’s Conservation Academy in Jersey, which had been at the forefront of wildlife preservation for decades. There he took take part in an endan-

gered species breeding course for conservation professionals. In the 1990s, the Johnson family bought a 25-acre former farm and pony club in Pearcedale and began its three-year redevelopment as a sanctuary for native wildlife. Now an ark for endangered creatures, the sanctuary is s living classroom, where staff encourage and help children and adults to unlock the mystery of Australian mammals, reptiles, birds, fish, insects and amphibians in a natural bush setting. Johnson says the sanctuary’s activities range from breeding and releasing endangered species, to critical habitat restoration and encouraging visitors to become wildlife champions. It is an ideal place for overseas visitors to get a glimpse of some out the country’s elusive nocturnal animals, but also for locals to learn more about the fascinating animals that call Australia home. On Tuesday 19 June the MP for Holt Cassandra Fernando led a ceremony at the wildlife conservation park to mark the opening of the new small mammal conservation breeding centre. The centre will play a vital role in sustaining population numbers for critically endangered native small mammal species beginning with breeding the pookila, which once was found in the local area. Derived from the Ngarigo word for mouse – bugila – pookila (pronounced poo-kee-lah) was adopted by the federal government in 1995 as the indigenous name for the species also known as the New Holland mouse.

Bev was born in South Australia and moved to the Mornington Peninsula thirty years ago. She is an emerging artist who works with ceramics, timber, stone and kelp. As part of NAIDOC week, MPRG created a fantastic video on Bev’s practice, which you can view on our website.

On 2 August we are launching a new fundraising initiative, the MPRG Print Edition, featuring a unique limited edition artwork by a Mornington Peninsula based artist. Our inaugural MPRG Print edition is by local artist Rosie Weiss.

MPRG was recently successful with a Regional Collections Access Program grant. This will enable us to transform an under-utilised storage space into a dynamic new collection space and research lab, providing visitors with a behind-the-scenes look into the MPRG Collection. This grant was administered through Regional Arts Victoria, in

Our biennial National Works on Paper prize is just around the corner, opening to the public on Saturday 13 August. Check out our website for all the information about our exhibitions and events. Hope to see you at the gallery soon! Danny Lacy MPRG Gallery Director