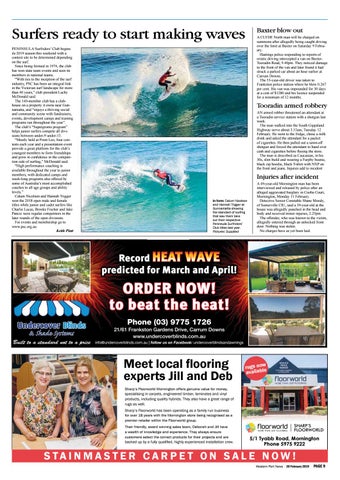 Surfers ready to start making waves PENINSULA Surfriders’ Club begins its 2019 season this weekend with a contest site to be determined depending on the surf. Since being formed in 1974, the club has won state team events and seen its members in national teams. “With ties to the inception of the surf industry, PSC has been an integral link in the Victorian surf landscape for more than 40 years,” club president Lachy McDonald said. The 140-member club has a clubhouse on a property it owns near Gunnamatta, and “enjoys a thriving social and community scene with fundraisers, events, development camps and training programs run throughout the year”. The club’s “Supergroms program” helps junior surfers compete all divisions between under-9 under-15. “Mostly held at Point Leo, four contests each year and a presentation event provide a great platform for the club’s youngest members to form friendships and grow in confidence in the competition side of surfing,” McDonald said. “High performance coaching is available throughout the year to junior members, with dedicated camps and week-long programs also offered by some of Australia’s most accomplished coaches to all age groups and ability levels.” Calum Nicolson and Hannah Trigger won the 2018 open male and female titles while junior and cadet surfers like Charlie Lucas, Brooke Fischer and Jake Pancic were regular competitors in the later rounds of the open divisions. For events and membership go to www.psc.org.au Keith Platt

Baxter blow out A CLYDE North man will be charged on summons after allegedly being caught driving over the limit at Baxter on Saturday 9 February. Hastings police responding to reports of erratic driving intercepted a van on BaxterTooradin Road, 9.40pm. They noticed damage to the front of the van and later found it had struck a parked car about an hour earlier at Carrum Downs. The 53-year-old driver was taken to Frankston police station where he blew 0.267 per cent. His van was impounded for 30 days at a cost of $1280 and his licence suspended for a minimum of 12 months.

Tooradin armed robbery AN armed robber threatened an attendant at a Tooradin service station with a shotgun last week. The man walked into the South Gippsland Highway servo about 3.15am, Tuesday 12 February. He went to the fridge, chose a milk drink and asked the attendant for a packet of cigarettes. He then pulled out a sawn-off shotgun and forced the attendant to hand over cash and cigarettes before fleeing the store. The man is described as Caucasian, in his 30s, slim build and wearing a Furphy beanie, black zip hoodie, black T-shirt with NXP on the front and jeans. Injuries add to incident

In form: Calum Nicolson and Hannah Trigger at Gunnamatta showing the standard of surfing that saw them take out their respective Peninsula Surfriders’ Club titles last year. Pictures: Supplied

A 49-year-old Mornington man has been interviewed and released by police after an alleged aggravated burglary in Cooba Court, Mornington, Monday 11 February. Detective Senior Constable Shane Moody, of Somerville CIU, said a 39-year-old at the house was allegedly punched in the head and body and received minor injuries, 2.25pm. The offender, who was known to the victim, allegedly entered through an unlocked front door. Nothing was stolen. No charges have as yet been laid.

Sharp’s Floorworld Mornington offers genuine value for money, specialising in carpets, engineered timber, laminates and vinyl products, including quality hybrids. They also have a great range of rugs as well. Sharp’s Floorworld has been operating as a family run business for over 18 years with the Mornington store being recognised as a premier retailer within the Floorworld group. Their friendly, award winning sales team, Deborah and Jill have a wealth of knowledge and experience. They always ensure customers select the correct products for their projects and are backed up by a fully qualified, highly experienced installation crew.