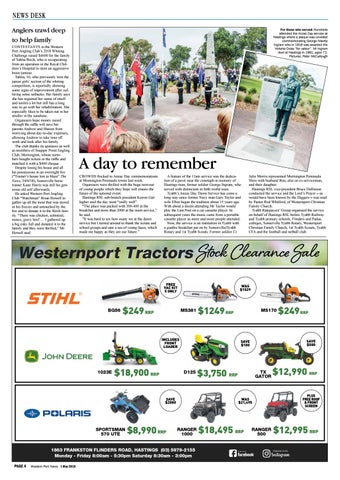 NEWS DESK Anglers trawl deep to help family CONTESTANTS in the Western Port Angling Club’s 2018 Whiting Challenge raised $4600 for the family of Tahlia Birch, who is recuperating from an operation in the Royal Children’s Hospital to stem an aggressive brain tumour. Tahlia, 10, who previously won the junior girls’ section of the whiting competition, is reportedly showing some signs of improvement after suffering some setbacks. Her family says she has regained her sense of smell and smiles a lot but still has a long way to go with her rehabilitation. She especially likes to be taken out in her stroller in the sunshine. Organisers hope money raised through the raffle will save her parents Andrew and Sharon from worrying about day-to-day expenses, allowing Andrew to take time off work and look after his family. The club thanks its sponsors as well as members of Snapper Point Angling Club, Mornington, whose members bought tickets in the raffle and matched it with a $400 cheque. Despite losing his house and all his possessions in an overnight fire (“Trainer’s house lost in blaze” The News, 24/4/18), Somerville horse trainer Kane Harris was still his generous old self afterwards. He asked Western Port Angling Club “Watchman” Brian Howell to gather up all the meat that was stored in his freezer and untouched by the fire and to donate it to the Birch family. “There was chicken, schnitzel, mince, gravy beef … I gathered up a big esky full and donated it to the family and they were thrilled,” Mr Howell said.

For those who served: Hundreds attended the Anzac Day service at Hastings where a plaque was unveiled commemorating George Mawby Ingram who in 1918 was awarded the Victoria Cross “for valour”. Mr Ingram died at Hastings in 1961, aged 72. Pictures: Peter McCullough

A day to remember CROWDS flocked to Anzac Day commemorations at Mornington Peninsula towns last week. Organisers were thrilled with the huge turn-out of young people which they hope will ensure the future of the national event. Hastings RSL sub-branch president Keiren Gallagher said the day went “really well”. “The place was packed with 300-400 at the breakfast and more than 2000 at the main service,” he said. “It was hard to see how many we at the dawn service but I turned around to thank the scouts and school groups and saw a sea of young faces, which made me happy as they are our future.”

A feature of the 11am service was the dedication of a paver near the cenotaph in memory of Hastings man, former soldier George Ingram, who served with distinction in both world wars. Tyabb’s Anzac Day Dawn Service has come a long way since former Navy man Gary Taylor and wife Ellen began the tradition about 15 years ago. With about a dozen attending Mr Taylor would play the Last Post on a car cassette player. In subsequent years the music came from a portable cassette player as more and more people attended. Now, the service is an institution in Tyabb with a gunfire breakfast put on by Somerville/Tyabb Rotary and 1st Tyabb Scouts. Former soldier Cr