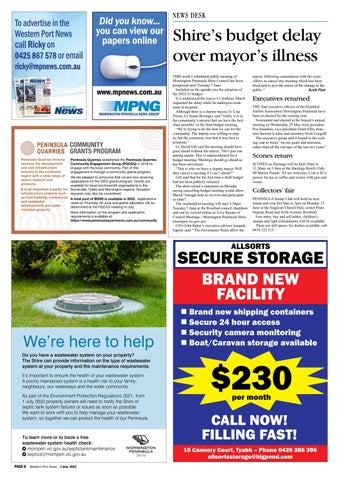 YOUR GUIDE ON THIS TO WHAT’S FOR WEEKEND FAMILIES PENINSULA

For all advertising and editorial, call 03

wall Somerville been a cricket has always Island. ROB Phillips plays for Frenchowner was fanatic, and business The Somerville his idol, Shane the death of hit hard by really wanted to do someWarne. “We

children with their ROB and Bec Mathew and their and Maddison Shane Warne. tribute to Sissons Picture: Gary

COME AND SEE THE CHICKENS IN ROAMING FREE THE PADDOCK!

Our farm is family owned and managed. We have been producing quality eggs for over and managed. is family owned for over Our farm 40 years, supplying the public, restaurants quality eggs been producing restaurants We have and other businesses on the peninsula. the public, supplying 40 years, on the peninsula. Eggs are collected 365 days a year so you can businesses and other you can with a year so be assured that you are buying the freshest eggs 365 days eggs with collected the best yolk and flavour. Eggs are the freshest are buying that you flavour. be assured Retail and Wholesale from our barn door. yolk and the best barn door. from our Wholesale Retail and

Shire’s budget delay over mayor’s illness THIS week’s scheduled public meeting of Mornington Peninsula Shire Council has been postponed until Tuesday 7 June. Included on the agenda was the adoption of the 2022/23 budget. It is understood the mayor Cr Anthony Marsh requested the delay while he undergoes treatment in hospital. Although there is a deputy mayor, Cr Lisa Dixon, Cr Susan Bissinger said “really, it is in the community’s interest that we have the best chair possible” at the final budget meeting. “We’re trying to do the best we can for the community. The deputy was willing to step in, but the consensus was that it was best to postpone.” Cr David Gill said the meeting should have gone ahead without the mayor: “He’s just one among equals. This is unprecedented for a budget meeting. Meetings should go ahead as has been advertised. “This is why we have a deputy mayor. Will they cancel a meeting if I can’t attend?” Gill said that for the first time a draft budget had not been publicly released. The shire issued a statement on Monday saying cancelling budget meeting would allow Marsh “enough time to recover and participate as chair”. The rescheduled meeting will start 5.30pm Tuesday 7 June at the Rosebud council chambers and can be viewed online at: Live Stream of Council Meetings - Mornington Peninsula Shire (mornpen.vic.gov.au) CEO John Baker’s executive advisor Amanda Sapolu said: “The Governance Rules allow the

mayor, following consultation with the councillors, to cancel any meeting which has been fixed and to provide notice of the change to the public.” Keith Platt

Executives returned THE four executive officers of the Disabled Surfers Association Mornington Peninsula have been re-elected for the coming year. Nominated and elected at the branch’s annual meeting on Wednesday 25 May were president Pea Saunders, vice-president Grant Ellis, treasurer Stewart Lockie and secretary Scott Cosgriff. The executive group said it hoped in the coming year to focus “on our goals and missions, rather than all the red tape of the last two years”.

Scones return SCONES on Hastings will be held 10am to 11.30am on 3 June at the Hastings Bowls Club, 40 Marine Parade. All are welcome. Cost is $2 a person for tea or coffee and scones with jam and cream.

Collectors’ fair PENINSULA Stamp Club will hold its next stamp and coin fair 9am to 3pm on Monday 13 June at the Anglican Church Hall, corner Point Nepean Road and Sixth Avenue, Rosebud. Free entry, buy and sell tables, children’s stamps and light refreshments will be available. There are still spaces for dealers available, call 0418 322 315.

SECURE STORAGE BRAND NEW FACILITY We’re here to help Do you have a wastewater system on your property? The Shire can provide information on the type of wastewater system at your property and the maintenance requirements. It’s important to ensure the health of your wastewater system. A poorly maintained system is a health risk to your family, neighbours, our waterways and the wider community. As part of the Environment Protection Regulations 2021, from 1 July 2022 property owners will need to notify the Shire of septic tank system failures or issues as soon as possible. We want to work with you to help manage your wastewater system, so together we can protect the health of our Peninsula.