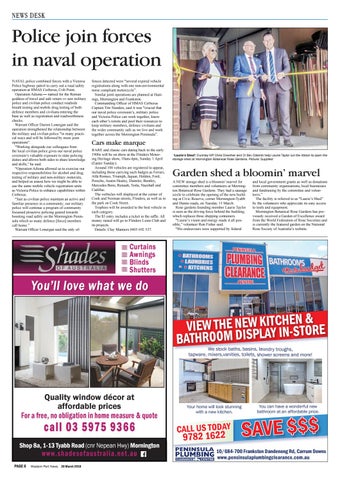 Police join forces in naval operation NAVAL police combined forces with a Victoria Police highway patrol to carry out a road safety operation at HMAS Cerberus, Crib Point. Operation Adiona — named for the Roman goddess of travel and safe return — saw military police and civilian police conduct roadside breath testing and mobile drug testing of both defence members and civilians entering the base as well as registration and roadworthiness checks. Warrant Officer Darren Lonergan said the operation strengthened the relationship between the military and civilian police “in many practical ways and will be followed by more joint operations”. “Working alongside our colleagues from the local civilian police gives our naval police coxswain’s valuable exposure to state policing duties and allows both sides to share knowledge and skills,” he said. “Operation Adiona allowed us to exercise our respective responsibilities for alcohol and drug testing of military and non-military motorists, and helped us assess how we might be able to use the same mobile vehicle registration units as Victoria Police to enhance capabilities within Cerberus. “Just as civilian police maintain an active and familiar presence in a community; our military police will continue a program of community focussed proactive policing geared towards boosting road safety on the Mornington Peninsula which so many defence [force] members call home.” Warrant Officer Lonergan said the only of-

fences detected were “several expired vehicle registrations along with one non-environmental noise compliant motorcycle”. Similar joint operations are planned at Hastings, Mornington and Frankston. Commanding Officer of HMAS Cerberus Captain Tim Standen, said it was “crucial that our naval police coxswain’s, military police and Victoria Police can work together, know each other’s remits and pool their resources to keep military members, defence civilians and the wider community safe as we live and work together across the Mornington Peninsula”.

Cars make marque RARE and classic cars dating back to the early 1900s will be on show at the Flinders Motoring Heritage show, 10am-4pm, Sunday 1 April (Easter Sunday). Around 100 vehicles are registered to appear, including those carrying such badges as Ferrari, Alfa Romeo, Triumph, Jaguar, Holden, Ford, Porsche, Austin Healey, Daimler, Bentley, Mercedes Benz, Renault, Tesla, Vauxhall and Cadillac. The verhicles will displayed at the corner of Cook and Norman streets, Flinders, as well as in the park on Cook Street. Trophies will be awarded to the best vehicle in each category. The $5 entry includes a ticket in the raffle. All money raised will go to Flinders Lions Club and its projects. Details: Clay Manners 0405 692 537.

Garden shed a bloomin’ marvel A NEW storage shed is a bloomin’ marvel for committee members and volunteers at Mornington Botanical Rose Gardens. They had a sausage sizzle to celebrate the opening of the new building at Civic Reserve, corner Mornington-Tyabb and Dunns roads, on Tuesday 13 March. Rose gardens founding member Laurie Taylor is seen as the driving force behind the building, which replaces three shipping containers. “Laurie’s vision and energy made it all possible,” volunteer Ron Fisher said. “His endeavours were supported by federal

and local government grants as well as donations from community organisations, local businesses and fundraising by the committee and volunteers.” The facility is referred to as “Laurie’s Shed” by the volunteers who appreciate its easy access to tools and equipment. Mornington Botanical Rose Gardens has previously received a Garden of Excellence award from the World Federation of Rose Societies and is currently the featured garden on the National Rose Society of Australia’s website.

Your home will look stunning with a new kitchen.

You can have a wonderful new bathroom at an affordable price.