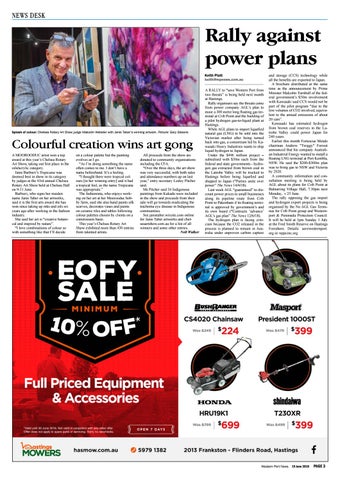 Colourful creation wins art gong A MOOROODUC artist won a top award at this year’s Chelsea Rotary Art Show, taking out first place in the oils/acrylic category. Janis Barbieri’s Tropicana was deemed best in show in its category by judges at the 43rd annual Chelsea Rotary Art Show held at Chelsea Hall on 9-11 June. Barbieri, who signs her maiden name Janis Taber on her artworks, said it is the first arts award she has won since taking up inks and oils six years ago after working in the fashion industry. She said her art is “creative botanical and inspired by nature”. “I love combinations of colour so with something like that I’ll decide

on a colour palette but the painting evolves as I go. “As I’m doing something the name often comes to me. I don’t have a name beforehand. It’s a feeling. “I thought there were tropical colours [in her winning entry] and it had a tropical feel, so the name Tropicana was appropriate.” The fashionista, who enjoys working on her art at her Moorooduc hobby farm, said she also hand paints silk scarves, decorates vases and paints on ceramic tiles and tables following colour palettes chosen by clients on a commission basis. This year’s Chelsea Rotary Art Show exhibited more than 450 entries from talented artists.

All proceeds from the show are donated to community organisations including the CFA. “Over the three days, the art show was very successful, with both sales and attendance numbers up on last year,” entry secretary Lesley Pitcher said. Ms Pitcher said 34 Indigenous paintings from Kakadu were included in the show and proceeds from their sale will go towards eradicating the trachoma eye disease in Indigenous communities. See janistaber.wixsite.com online for Janis Taber artworks and chelseaartshow.com.au for a list of all winners and some other entries. Neil Walker

A RALLY to “save Western Port from two threats” is being held next month at Hastings. Rally organisers say the threats come from power company AGL’s plan to moor a 300 metre long floating gas terminal at Crib Point and the building of a pilot hydrogen gas-to-liquid plant at Hastings. While AGL plans to import liquefied natural gas (LNG) to be sold into the Victorian market after being turned back into gas, a consortium led by Kawasaki Heavy Industries wants to ship liquid hydrogen to Japan. Under the $496 million project – subsidised with $50m each from the federal and state governments - hydrogen gas extracted from brown coal in the Latrobe Valley will be trucked to Hastings before being liquefied and shipped to Japan (“Parties unite over power” The News 14/4/18). Last week AGL “guaranteed” to discount power prices to small businesses along its pipeline route from Crib Point to Pakenham if its floating terminal is approved by government’s and its own board (“Contracts ‘advance’ AGL’s gas plan” The News 12/6/18). The hydrogen plan is facing criticism because the CO2 released in the process is planned to remain in Australia under unproven carbon capture

and storage (CCS) technology while all the benefits are exported to Japan. A brochure distributed at the same time as the announcement by Prime Minister Malcolm Turnbull of the federal government’s $50m involvement with Kawasaki said CCS would not be part of the pilot program “due to the low volumes of CO2 involved, equivalent to the annual emissions of about 20 cars”. Kawasaki has estimated hydrogen from brown coal reserves in the Latrobe Valley could power Japan for 240 years. Earlier this month Fortescue Metals chairman Andrew &quot;Twiggy&quot; Forrest announced that his company Australian Industrial Energy wanted to install a floating LNG terminal at Port Kembla, NSW. He said the $200-$300m plan was to bring gas to NSW and Victoria by 2020. A community information and consultation meeting is being held by AGL about its plans for Crib Point at Balnarring Village Hall, 7.30pm next Monday, v 25 June. The rally opposing the gas import and hydrogen export projects is being organised by the No AGL Gas Terminus for Crib Point group and Westernport &amp; Peninsula Protection Council. It will be held at 1pm Sunday 1 July at the Fred Smith Reserve on Hastings Foreshore. Details: savewesternport. org or wppcinc.org