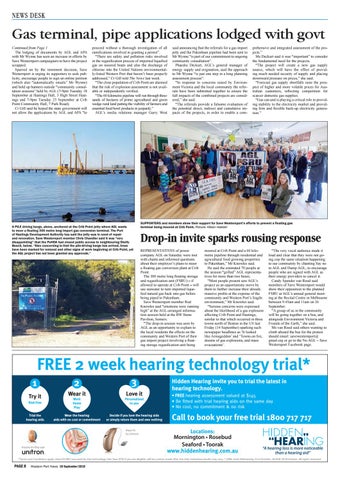 Gas terminal, pipe applications lodged with govt Continued from Page 1 The lodging of documents by AGL and APA with Mr Wynne has seen an increase in efforts by Save Westernport campaigners to have the project scrapped. Spurred on by the imminent decision, Save Westernport is urging its supporters to seek publicity, encourage people to sign an online petition (which also “automatically emails” Mr Wynne) and hold up banners outside “community consultation sessions” held by AGL (7-9pm Tuesday 18 September at Hastings Hall, 3 High Street Hastings and 7-9pm Tuesday 25 September at Crib Point Community Hall, 7 Park Road). Cr Gill said he hoped the state government will not allow the applications by AGL and APA “to

proceed without a thorough investigation of all ramifications involved in granting a permit”. “There are safety and pollution risks involved in the regasification process of imported liquefied gas on moored boats and also the discharge of chlorine into the United Nations environmentally-listed Western Port that haven’t been properly addressed,” Cr Gill told The News last week. “The close population of Crib Point are alarmed that the risk of explosion assessment is not available or independently verified. “The 60 kilometre pipeline will run through thousands of hectares of prime agricultural and green wedge rural land putting the viability of farmers and essential food bowl products in jeopardy.” AGL’s media relations manager Garry West

A PILE driving barge, above, anchored at the Crib Point jetty where AGL wants to moor a floating 300 metre long import gas conversion terminal. The Port of Hastings Development Authority has said the jetty was in need of repair and renovation. Save Westernport member Chris Chandler said it was “very disappointing” that the PoHDA had closed public access to neighbouring Shelly Beach, below. “Also concerning is that the pile-driving barge has arrived, trees have been marked for removal and other signs of work beginning at Crib Point, yet the AGL project has not been granted any approvals.”

Drop-in invite sparks rousing response REPRESENTATIVES of power company AGL on Saturday were met with chants and informed questions about their employer’s plans to moor a floating gas conversion plant at Crib Point. The 300 metre long floating storage and regasification unit (FSRU) – if allowed to operate at Crib Point – will use seawater to turn imported liquefied natural gas back into gas before being piped to Pakenham. Save Westernport member Rod Knowles said “emotions were running high” at the AGL-arranged information session held at the RW Stone Pavilion, Somers. “The drop-in session was seen by AGL as an opportunity to explain to the local residents the effects on the community and Western Port of their gas import project involving a floating storage regasification unit being

Wear the hearing aids with no cost or commitment

prehensive and integrated assessment of the projects.” Ms Deckart said it was “important” to consider the fundamental need for the projects. “The project will create a new gas supply source, which will have the effect of providing much needed security of supply and placing downward pressure on prices,” she said. “Forecast gas supply shortfalls raise the prospect of higher and more volatile prices for Australian customers, reflecting competition for scarcer domestic gas supplies. “Gas can and is playing a critical role in providing stability to the electricity market and providing firm and flexible back-up electricity generation.”

SUPPORTERS and members show their support for Save Westernport’s efforts to prevent a floating gas terminal being moored at Crib Point. Picture: Alison Hoelzer

said announcing that the referrals for a gas import jetty and the Pakenham pipeline had been sent to Mr Wynne “is part of our commitment to ongoing community consultation”. Phaedra Deckart, AGL’s general manager of energy supply and origination, said the approach to Mr Wynne “is just one step in a long planning assessment process”. “In response to concerns raised by Environment Victoria and the local community the referrals have been submitted together to ensure the full impacts of the combined projects are considered,” she said. “The referrals provide a fulsome evaluation of the potential direct, indirect and cumulative impacts of the projects, in order to enable a com-

moored at Crib Point and a 60 kilometre pipeline through residential and agricultural food growing properties to Pakenham,” Mr Knowles said. He said the estimated 70 people at the session “grilled” AGL representatives for more than two hours. “Most people present saw AGL’s project as an opportunistic move by them to further increase their already massive profits at the expense of the community and Western Port’s fragile environment,” Mr Knowles said. “Serious concerns were expressed about the likelihood of a gas explosion affecting Crib Point and Hastings, similar to that which occurred in three towns north of Boston in the US last Friday (14 September) sparking such newspaper headlines as ‘It looked like Armageddon’ and ‘Towns on fire, dozens of gas explosions, and mass evacuations’.

“The very vocal audience made it loud and clear that they were not going cop the same situation happening to our community by chanting Say no to AGL and Dump AGL, to encourage people who are signed with AGL as their energy providers to cancel it. Candy Spender van Rood said members of Save Westernport would show their opposition to the planned FSRU at AGL’s annual general meeting at the Recital Centre in Melbourne between 9.45am and 11am on 26 September. “A group of us in the community will be going together on a bus, and alongside Environment Victoria and Friends of the Earth,” she said. Ms van Rood said others wanting to climb aboard the bus for the protest should email: savewesternport@ gmail.org or go to the No AGL ~ Save Westernport Facebook page.

Hidden Hearing invite you to trial the latest in hearing technology. • FREE hearing assessment valued at $145 • Be fitted with trial hearing aids on the same day • No cost, no commitment &amp; no risk

*Terms and Conditions apply. Moxi Fit (RIC) are used for the technology trial. Your (ITE) if you are eligible, will be custom made after the trial. Individual results may vary. ^ Offer ends Wednesday 31st October, 2018 © 2018 Unitron. All rights reserved