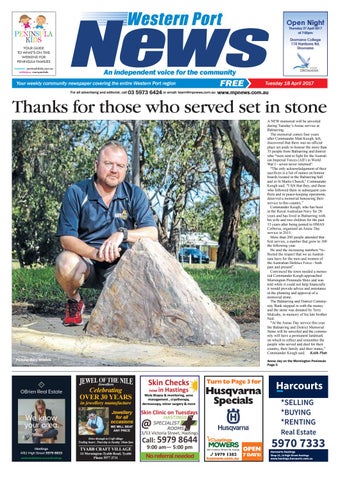 Thanks for those who served set in stone A NEW memorial will be unveiled during Tuesday’s Anzac service at Balnarring. The memorial comes four years after Commander Matt Keogh, left, discovered that there was no official place set aside to honour the more than 35 people from Balnarring and district who “were sent to fight for the Australian Imperial Forces (AIF) in World War I - seven never returned”. “The only acknowledgement of their sacrifices is a list of names on honour boards located in the Balnarring hall and in St Marks Church,” Commander Keogh said. “I felt that they, and those who followed them in subsequent conflicts and in peace-keeping operations, deserved a memorial honouring their service to this country.” Commander Keogh, who has been in the Royal Australian Navy for 28 years and has lived in Balnarring with his wife and two children for the past 15 years after being posted to HMAS Cerberus, organised an Anzac Day service in 2015. More than 200 people attended that first service, a number that grew to 300 the following year. He said the increasing numbers “reflected the respect that we as Australians have for the men and women of the Australian Defence Force - both past and present”. Convinced the town needed a memorial Commander Keogh approached Mornington Peninsula Shire and was told while it could not help financially it would provide advice and assistance in the planning and approval of a memorial stone. The Balnarring and District Community Bank stepped in with the money and the stone was donated by Terry Mulcahy, in memory of his late brother Neil. “At the Anzac Day service this year the Balnarring and District Memorial Stone will be unveiled and the community will have a permanent landmark on which to reflect and remember the people who served and died for their country, their family and their mates,” Commander Keogh said. Keith Platt Picture: Gary Sissons

We know your area.

Turn to Page 3 for