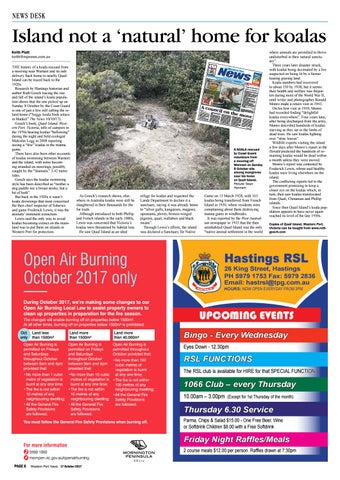 Island not a ‘natural’ home for koalas Keith Platt keith@mpnews.com.au THE history of a koala rescued from a mooring near Warneet and its safe delivery back home to nearby Quail Island can be traced back to the 1920s. Research by Hastings historian and author Ruth Gooch tracing the rise and fall of the island’s koala population shows that the one picked up on Sunday 8 October by the Coast Guard is one of just a few still calling the island home (“Soggy koala finds solace in blanket” The News 10/10/17). Gooch’s book, Quail Island, Western Port, Victoria, tells of campers in the 1970s hearing koalas “bellowing” during the night and field ecologist Malcolm Legg in 2008 reporting seeing a “few” koalas in the manna gums. There have also been other accounts of koalas swimming between Warneet and the island, with some becoming stranded on moorings, possibly caught by the “dramatic” 3.42 metre tides. Gooch says the koalas swimming style has been described as “neither a dog paddle nor a breast stroke, but a bit of both”. But back in the 1920s it wasn’t koala drownings that most concerned the then chief inspector of fisheries and game Frederick Lewis, it was the animals’ imminent extinction. Lewis said the only way to avoid koalas becoming extinct on the mainland was to put them on islands in Western Port for protection.

COA ST unusual Guard volunteer s base a mooringpassenger on Sunday d at Hastings - a koala had The koalaoff Warneet. rescued an was picke ing on from the d The rescumooring abou up after being found shive t 100 metr e boat at abou was es rt to Warn 9.30am after on its way backfrom the jetty. towi eet Crawfish whose engin ng two men to Hastings e had brok Rock. in a “I saw en down tinny thought the koala on off the member it was a stuffed mooring and Sean toy,” rescu at first “We turne Hannam e boat said. d crew the engin over him back of while I was e off and I threw standing a blank side to the boat. The on et the ladde balan rest r at “The koala ce the boat. of the crew stood on the didn’t strug ashore the and Mr Hann released him gle and we took on am said him volved it was Quail Islan in it wasn rescuing a koala the first time d.” ’t , although he’s been near Warnunknown for inhe’d koalas eet. to be foun been told “Wranglin d in wate team job,” g him on rs he said. board and releasing him was a Rope trick mooring : The Koala Keith Platt

A coun cil on the m ove

rescue at Warneet found clinging Keith Plat was picke boat and to dry to keith@mp t d up by ropes on a Quail Islan then deliv the Coas ered home news.co Sissons t Guar (boat) d. Pictures: m.au Sean Hannsafe and almo d’s change st MOR NIN am and conferenc wants to Gary e and continuin GTO N Peni disasters. be in Brisbane Cr Julie Edge nsula Shire for a forum innovatio g to look far Recovery is If appr and on councillo n and inspiratio wide for November Forum in Brisb night’s oved by coun rs and n with meet ane from paring its top of the three to 1 Dece two ber), befo ing (Tue cillors at last to exec sday 10 journeys mber. Total 29 re arriv tails of and inter pack their bags utive preUnited This Nove cost ing is amou mstate trave in for over may be the shire repre councillor nt may riseabout $25,500. Mr CowNations’ COP Bonn for the In Nove seas l. goin 23 conf until after g overseas sentatives who assistant s by Mr Cow as a report Sweden ie will have Cr Simo mber, CEO Carl erence, with to tonig Bian alrea ie’s Mr Cow n In Febr ca Hubb ht’s coun executive dy “CEO, If the conf for anoth and plans to Germany Brooks prop Cowie and ie uary, the le state cil meet potentially later headbeen to erence er lomb said ose proved, for an s that the sentatives mayo ing. atten Closer conference south with internatio being in the study r Cr Bev for Cr the councillo dances are apwas “an speak with” of the shire other repre nal clim permissioto home, Cr in Malta. rs’ Brooks tour allow Cooffer that Edge has ate will be and $300costs - $800 towards people “who will meet and taken up and Floo n to attend the ance may or sought 0 the are all work d Disa may not a four- deducted from 0 Cr Edge deal revea by the CEO The shiresame goals ster ManFire, Cyclone year be ” (“CE at the shire ing led” The agement ’s and semi term train their $16,000 media This lates News 27/2 O study nars allow ing, conf and manager communications ”. erences t round he was Mr Cow /17). terstate unable Mark Kestigian and of over ie’s expe ance. travel be the to prov seas and nses ($14 follows said first to study tour ide name income ,500) will study the s or detour allow out of his chief oper to China by Cr September council $30,000 Hugh Frase ance in Sept approved agh and ating officer ember Niall McD r, by 2016. Daniel waste services onHinson. team leade r Continued Page 6

A KOALA rescued by Coast Guard volunteers from a mooring off Warneet on Sunday 8 October sits among mangroves near his home on Quail Island. Picture: Sean Hannam

As Gooch’s research shows, elsewhere in Australia koalas were still be slaughtered in their thousands for the fur trade. Although introduced to both Phillip and French islands in the early 1880s, Lewis was concerned that Victoria’s koalas were threatened by habitat loss. He saw Quail Island as an ideal

refuge for koalas and requested the Lands Department to declare it a sanctuary, saying it was already home to “silver gulls, kangaroos, magpies, opossums, plover, bronze-winged pigeons, quail, wallabies and black swans”. Through Lewis’s efforts, the island was declared a Sanctuary for Native

Land more than 1500m² Open Air Burning is permitted on Fridays and Saturdays throughout October between 9am and 4pm provided that:

Land more than 40,000m² Open Air Burning is permitted throughout October provided that:

Open Air Burning is permitted on Fridays and Saturdays throughout October between 9am and 4pm provided that:

During October 2017, we’re making some changes to our Open Air Burning Local Law to assist property owners to clean up properties in preparation for the fire season.

Game on 13 March 1928, with 165 koalas being transferred from French Island in 1930, where residents were complaining about them destroying manna gums in windbreaks. It was reported by the West Australian newspaper in 1933 that the then uninhabited Quail Island was the only “native animal settlement in the world

where animals are permitted to thrive undisturbed in their natural sanctuary”. Three years later disaster struck, with koalas being decimated by a fire suspected on being lit by a farmer leasing grazing land. Koala numbers had recovered to about 150 by 1938, but it seems their health and welfare was forgotten during most of the World War II, until writer and photographer Ronald Monro made a return visit in 1943. On his first visit in 1939, Monro had recorded finding “delightful koalas everywhere”. Four years later, after being discharged from the army, Monro described hundreds of koalas starving as they sat in the limbs of dead trees. He saw koalas fighting over “stray leaves”. Wildlife experts visiting the island a few days after Monro’s report in the Herald predicted the hundreds of remaining koalas would be dead within a month unless they were moved. Monro’s report was contested by Frederick Lewis, whom said healthy koalas were living elsewhere on the island. The conflicting reports led to the government promising to keep a closer eye on the koalas which, in turn, then saw koalas translocated from Quail, Chinaman and Phillip islands. Since then Quail Island’s koala population appears to have never again reached its level of the late 1930s. Copies of Quail Island, Western Port, Victoria can be bought from www.ruthgooch.com

(Except for 1st Thursday of the month)