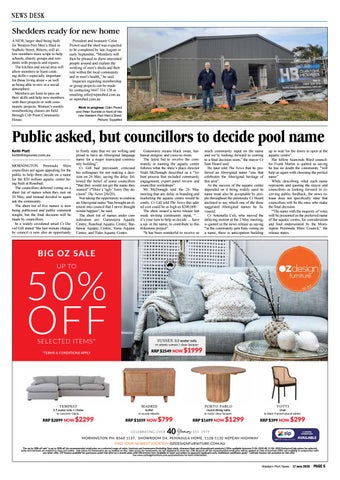 Shedders ready for new home A NEW, larger shed being built for Western Port Men’s Shed in Sudholz Street, Bittern, will allow members more scope to help schools, charity groups and residents with projects and repairs. The kitchen and social area will allow members to learn cooking skills – especially important for those living alone – as well as being able to mix in a social atmosphere. Members are keen to pass on their skills and help new members with their projects or with community projects. Women’s weekly woodworking classes are held through Crib Point Community House.

President and treasurer Colin Prowd said the shed was expected to be completed by late August or early September. “Members will then be pleased to show interested people around and explain the working of men’s sheds and their role within the local community and in men’s health,” he said. Inquiries regarding membership or group projects can be made by contacting 0447 354 158 or emailing info@wpmshed.com.au or wpmshed.com.au Work in progress: Colin Prowd and Peter Rumble in front of the new Western Port Men’s Shed. Picture: Supplied

Public asked, but councillors to decide pool name Keith Platt keith@mpnews.com.au MORNINGTON Peninsula Shire councillors are again appealing for the public to help them decide on a name for the $50 million aquatic centre being built at Rosebud. The councillors deferred voting on a short list of names when they met on 26 May, and instead decided to again ask the community. The short list of five names is now being publicised and public comment sought, but the final decision will be made by councillors. In a widely circulated email Cr David Gill stated “the last minute change by council is now also an opportunity

to firmly state that we are willing and proud to have an Aboriginal language name for a major municipal community building”. Cr Gill had previously criticised his colleagues for not making a decision on 26 May, saying the delay followed the belief of some councillors “that they would not get the name they wanted” (“Shire’s ‘ugly’ Sorry Day decision” The News 2/6/20). Not taking the opportunity to endorse an Aboriginal name “has brought an element into council that I never thought would happen”, he said. The short list of names under consideration are: Gunawarra Aquatic Centre; Rosebud Aquatic Centre; Barbawar Aquatic Centre; Yawa Aquatic Centre; and Tides Aquatic Centre.

Gunawarra means black swan, barbawar stingray and yawa to swim. The latest bid to involve the community in naming the aquatic centre follows what the shire’s place director Niall McDonagh described as a “robust process that included community engagement, expert panel review and councillor workshops”. Mr McDonagh told the 26 May meeting that any delay in branding and marketing the aquatic centre would be costly. Cr Gill told The News this added cost could be as high as $200,000. The shire issued a news release last week inviting community input, “… it’s your turn to help us decide … have a say in the name, to contribute to this milestone project”. “It has been wonderful to receive so

much community input on the name and we’re looking forward to coming to a final decision soon,” the mayor Cr Sam Heard said. He later told The News that he preferred an Aboriginal name &quot;one that celebrates the Aboriginal heritage of this area&quot;. As the success of the aquatic centre depended on it being widely used its name must also be acceptable by people throughout the peninsula. Cr Heard declined to say which one of the three suggested Aboriginal names he favoured. Cr Antonella Celi, who moved the delaying motion at the 2 May meeting, is quoted in the news release as saying “as the community gets busy voting on a name, there is anticipation building

up in wait for the doors to open at the aquatic centre”. Her fellow Seawinds Ward councillor Frank Martin is quoted as saying he has no doubt the community “will help us again with choosing the perfect name”. While describing what each name represents and quoting the mayor and councillors as looking forward to receiving public feedback, the news release does not specifically state that councillors will be the ones who make the final decision. “The name with the majority of votes will be presented as the preferred name of the aquatic centre, for consideration and final endorsement by the Mornington Peninsula Shire Council,” the release states.

The up to 50% off sale* is up to 50% off the recommended retail price on a selected range of sofas, furniture and homewares (including floor stock, clearance lines and discontinued products.) Offer available between 9-06-2020 till 22-06-2020 (inclusive).Sale prices for selected sofas and furniture are marked in-store and online. Sale prices for homewares are as marked on-line. Sales prices for homewares are not displayed in-store but 25% discount off the recommended retail price will be applied at time of purchase.Offer not available in conjunction with any other offer. ZIP finance available for purchases under this offer on 6 month plans with 0% interest free. Available in-store and online to approved applicants only. Additional conditions apply*. Latitude finance not accepted on this offer. * See www.ozdesignfurniture.com.au/promotions for more information.