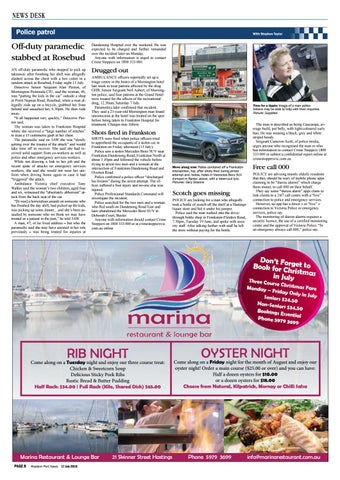 Dandenong Hospital over the weekend. He was expected to be charged and further remanded over the incident later on Monday. Anyone with information is urged to contact Crime Stoppers on 1800 333 000.

AN off-duty paramedic who stopped to pick up takeaway after finishing her shift was allegedly slashed across the chest with a box cutter in a random attack at Rosebud, Friday night 13 July. Detective Senior Sergeant Alan Paxton, of Mornington Peninsula CIU, said the woman, 46, was “putting the kids in the car” outside a shop in Point Nepean Road, Rosebud, when a man allegedly rode up on a bicycle, grabbed her from behind and assaulted her, 6.30pm. He then rode away. “It all happened very quickly,” Detective Paxton said. The woman was taken to Frankston Hospital where she received a “large number of stitches” to treat a 15 centimetre gash in her chest. The paramedic said on 3AW she was “slowly getting over the trauma of the attack” and would take time off to recover. She said she had received solid support from co-workers as well as police and other emergency services workers. While not drawing a link to her job and the recent spate of attacks on emergency services workers, she said she would not wear her uniform when driving home again in case it had “triggered” the attack. Ambulance Victoria chief executive Tony Walker said the woman’s two children, aged four and six, witnessed the “absolutely abhorrent” attack from the back seat of the car. “[It was] a horrendous assault on someone who has finished the day shift, had picked up the kids, was picking up some dinner... and she’s been assaulted by someone who we think we may have treated as a patient in the past,” he told 3AW. A man, 47, of no fixed address – but who the paramedic said she may have assisted in her role previously – was being treated for injuries at

Drugged out AMBULANCE officers reportedly set up a triage centre in the bistro of a Mornington hotel last week to treat patrons affected by the drug GHB. Senior Sergeant Neil Aubert, of Mornington police, said four patrons at the Grand Hotel were treated for the effects of the recreational drug, 12.30am, Saturday 7 July. Paramedics later confirmed that incident. They said a 21-year-old Mornington man found unconscious at the hotel was treated on the spot before being taken to Frankston Hospital for treatment. Charges may follow.

Time for a tipple: Image of a man police believe may be able to help with their inquiries. Picture: Supplied

The man is described as being Caucasian, average build, pot belly, with light-coloured curly hair. He was wearing a black, grey and white striped hoody. Sergeant Cameron Scott, of police media, urges anyone who recognised the man or who has information to contact Crime Stoppers 1800 333 000 or submit a confidential report online at crimestoppersvic.com.au

SHOTS were fired when police officers tried to apprehend the occupants of a stolen car in Frankston on Friday afternoon (13 July). Police saw a stolen Mercedes Benz SUV near Frankston-Dandenong Road, Frankston North at about 1.10pm and followed the vehicle before trying to arrest two men and a woman at the intersection of Frankston-Dandenong Road and Overton Road. Police confirmed a police officer “discharged his firearm” during the arrest attempt. The officer suffered a foot injury and no-one else was injured. Police Professional Standards Command will investigate the incident. Police searched for the two men and a woman who fled south on Dandenong Road East and later abandoned the Mercedes Benz SUV in Deborah Court, Baxter. Anyone with information should contact Crime Stoppers on 1800 333 000 or at crimestoppersvic. com.au online

Move along now: Police cordoned off a Frankston intersection, top, after shots fired during arrest attempt and, below, holes in Mercedes Benz SUV dumped in Baxter, above, with a blown-out tyre. Pictures: Gary Sissons

Scotch goes missing POLICE are looking for a man who allegedly took a bottle of scotch off the shelf at a Hastings liquor store and hid it under his jumper. Police said the man walked into the drivethrough bottle shop in Frankston-Flinders Road, 7.50pm, Tuesday 19 June, and spoke with security staff. After talking further with staff he left the store without paying for the bottle.

Free call 000 POLICE are advising mainly elderly residents that they should be wary of mobile phone apps claiming to be “duress alarms” which charge them money to call 000 on their behalf. They say some “duress alarm” apps claim to link clients to a 24/7 call centre with a “live” connection to police and emergency services. However, no app has a direct – or “live” – connection to Victoria Police or emergency services, police say. The monitoring of duress alarms requires a security licence, the use of a certified monitoring centre and the approval of Victoria Police. “In an emergency always call 000,” police say.