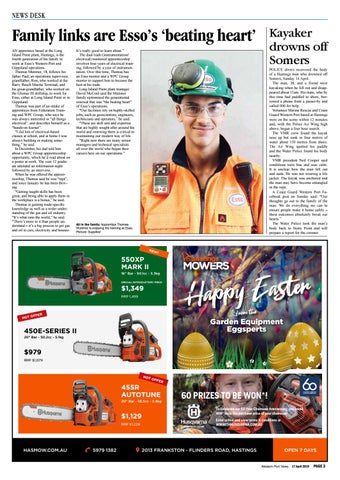 Family links are Esso’s ‘beating heart’ AN apprentice based at the Long Island Point plant, Hastings, is the fourth generation of his family to work at Esso’s Western Port and Gippsland operations. Thomas Mutimer, 18, follows his father Paul, an operations supervisor, grandfather, Ron, who worked at the Barry Beach Marine Terminal, and his great-grandfather, who worked on the Glomar III drillship, to work for Esso, either at Long Island Point or in Gippsland. Thomas was part of an intake of apprentices from Federation Training and WPC Group, who says he was always interested in “all things electrical”, and describes himself as a “hands-on learner”. “I did lots of electrical-based classes at school, and at home I was always building or making something,” he said. In December, his dad told him about a WPC Group apprenticeship opportunity, which he’d read about on a poster at work. The year 12 graduate attended an information night followed by an interview. When he was offered the apprenticeship, Thomas said he was “rapt”, and since January he has been thriving. “Getting taught skills has been great, and being able to apply them in the workplace is a bonus,” he said. Thomas is gaining trade-specific knowledge as well as a wider understanding of the gas and oil industry. “It’s what runs the world,” he said. “There’s more to it than people understand – it’s a big process to get gas and oil to cars, electricity and houses-

It’s really good to learn about.” The dual trade (instrumentation/ electrical) mentored apprenticeship involves four years of electrical training, followed by a year of instrumentation. Over this time, Thomas has an Esso mentor and a WPC Group mentor to support him to become the best at his trade. Long Island Point plant manager David McCord said the Mutimer family epitomised the generational renewal that was “the beating heart” of Esso’s operations. “Our facilities rely on highly-skilled jobs, such as geoscientists, engineers, technicians and operators,” he said. “These are skill sets and expertise that are highly sought after around the world and renewing them is critical to maintaining our modern way of life. “Right now there are many senior managers and technical specialists all over the world who began their careers here on our operations.”

POLICE divers recovered the body of a Hastings man who drowned off Somers, Sunday 14 April. The man, 38, and a friend were kayaking when he fell out and disappeared about 11am. His mate, who by this time had paddled to shore, borrowed a phone from a passer-by and called 000 for help. Volunteer Marine Rescue and Coast Guard Western Port based at Hastings were on the scene within 12 minutes and, with the Police Air Wing high above, began a four hour search. The VMR crew found the kayak nose up but sunk in four metres of water about 150 metres from shore. The Air Wing spotted his paddle and the Water Police found his body nearby. VMR president Neil Cooper said conditions were fine and seas calm. It is unclear how the man fell out and sank. He was not wearing a life jacket. The kayak was anchored and the man may have become entangled in the rope. A Coast Guard Western Port Facebook post on Sunday said: “Our thoughts go out to the family of the man. We do everything we can to ensure people make it home safely – these outcomes absolutely break our hearts.” The Water Police took the man’s body back to Stony Point and will prepare a report for the coroner.

All in the family: Apprentice Thomas Mutimer is enjoying his training at Esso. Picture: Supplied

60 PRIZES TO BE WON*! To celebrate our 60 Year Chainsaw Anniversary, you could WIN* back the purchase price of your chainsaw! Enter online and view terms &amp; conditions @ WINWITHHUSQVARNA.COM.AU