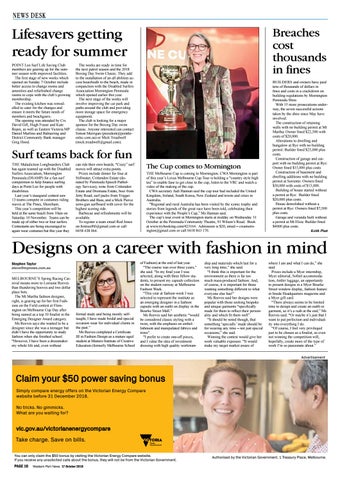 Lifesavers getting ready for summer POINT Leo Surf Life Saving Club members are gearing up for the summer season with improved facilities. The first stage of new works which opened on Sunday 7 October include better access to change rooms and amenities and refurbished change rooms to cope with the club’s growing membership. The existing kitchen was remodelled to cater for the changes and ensure it meets the future needs of members and beachgoers. The opening was attended by Crs David Gill, Hugh Fraser and Kate Roper, as well as Eastern Victoria MP Daniel Murlino and Balnarring and District Community Bank manager Greg Hood.

The works are ready in time for the next patrol season and the 2018 Boxing Day Swim Classic. They add to the installation of an all abilities access boardwalk to the beach, made in conjunction with the Disabled Surfers Association Mornington Peninsula which opened earlier this year. The next stage of the works will involve improving the car park and paths around the club and providing more storage space for emergency equipment. The club is looking for a major sponsor for the Boxing Day swim classic. Anyone interested can contact Simon Merrigan (president@pointleoslsc.com.au) or Mick Treadwell (mick.treadwell@gmail.com).

Surf teams back for fun THE Maladiction Longboarders Club has again teamed up with the Disabled Surfers Association, Mornington Peninsula (DSAMP) for a fun surf competition to help finance surfing days at Point Leo for people with disabilities. Last year’s inaugural contest saw 13 teams compete in costumes riding waves at The Pines, Shoreham. This year’s competition will be held at the same beach from 10am on Saturday 10 November. Teams can be made up of either two or four surfers. Contestants are being encouraged to again wear costumes but this year they

can ride their own boards. “Crazy” surf moves will attract extra points. Prizes include dinner for four at Stillwater, Crittenden Estate (donated by Peninsula Speech Pathology Services), wine from Crittenden Estate and Dromana Estate, beer from Jetty Road, surf packs from Trigger Brothers and Bass, and a Mick Pierce semi-gun surfboard with cover for the highest scoring ride. Barbecue and refreshments will be available. To register a team email Rod Jones on firstreef60@gmail.com or call 0458 438 064.

The Cup comes to Mornington THE Melbourne Cup is coming to Mornington. CWA Mornington is part of this year’s Lexus Melbourne Cup Tour is holding a “country style high tea” to enable fane to get close to the cup, listen to the VRC and watch a video of the making of the cup. CWA secretary Judi Hannan said the cup tour had included the United Kingdom, Ireland, South Korea, New Zealand and towns and cities in Australia. “Regional and rural Australia has been visited by the iconic trophy and stories from legends of the great race have been told, celebrating their experience with the People’s Cup,” Ms Hannan said. The cup’s tour event in Mornington starts at midday on Wednesday 31 October at the Peninsula Community Theatre, 91 Wilson’s Road. Book at www.trybooking.com/423164. Admission is $20, email – cwamornington@gmail.com or call 0418 843 170.

Designs on a career with fashion in mind Stephen Taylor steve@mpnews.com.au MELBOURNE’S Spring Racing Carnival means more to Lorraine Reeves than thundering hooves and two dollar place bets. The Mt Martha fashion designer, right, is gearing up for her first Fashions on the Field contest at Flemington on Melbourne Cup Day after being named as a top 10 finalist in the Emerging Designer Award category. Ms Reeves says she wanted to be a designer since she was a teenager but didn’t have the opportunity to study fashion when she finished school. “However, I have been a dressmaker my whole life and, even without

formal study and being mostly selftaught, I have made bridal and special occasion wear for individual clients in the past.” Ms Reeves completed a Certificate III in Fashion Design as a mature aged student at Masters Institute of Creative Education (formerly Melbourne School

of Fashion) at the end of last year. “The course was over three years,” she said. “In my final year I was selected, along with three fellow students, to present my capsule collection on the student runway at Melbourne Fashion Week. “This year at fashion week I was selected to represent the institute as an emerging designer in a fashion capsule with an outfit on display in the Bourke Street Mall.” Ms Reeves said her aesthetic “would be considered classic styling with a twist, with the emphasis on embellishment and manipulated fabrics and trims”. “I prefer to create one-off pieces, and I value the idea of investment dressing with high quality workman-

ship and materials which last for a very long time,” she said. “I think this is important for the environment as there is far too much mass-produced fashion. And, of course, it is important for those wanting something different to what everyone else has!” Ms Reeves said her designs were popular with those seeking bespoke and unique garments “specifically made for them to reflect their personality and which fit them well”. “It should be noted though, that something ‘specially’ made should be for wearing any time – not just special occasions,” she said. Winning the contest would give her work valuable exposure. “It would make my target market aware of

where I am and what I can do,” she said. Prizes include a Myer internship, Myer editorial, Sofitel accommodation, Antler luggage, an opportunity to present designs in a Myer Bourke Street window display, fashion feature in Inside Headquarters magazine and a Myer gift card. “There always seems to be limited time to design and create an outfit or garment, so it’s a rush at the end,” Ms Reeves said. “Or maybe it’s just that I want to put perfection and individuality into everything I do. “Of course, I feel very privileged just to be chosen as a finalist, so even not winning the competition will, hopefully, create more of the type of work I’m so passionate about.” Advertisement