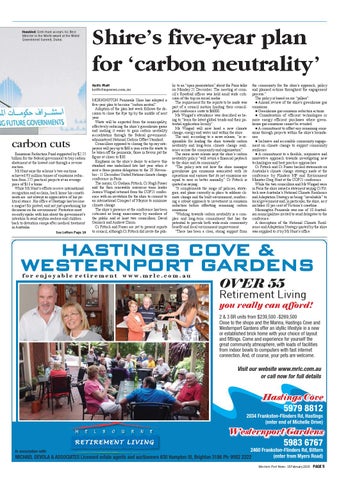 carbon cuts Emissions Reduction Fund supported by $2.55 billion for the federal government to buy carbon abatement at the lowest cost through a reverse auction. Mr Hunt says the scheme’s two auctions achieved 93 million tonnes of emissions reduction from 275 practical projects at an average price of $13 a tonne. While Mr Hunt’s efforts receive international recognition and acclaim, back home his constituents are not always so appreciative of his political stance. His office at Hastings has become a magnet for protest, and not just questioning his decisions on the environment. Protesters most recently spoke with him about the government’s intention to send asylum seekers and children back to detention camps after medical treatment in Australia. See Letters Page 10

MORNINGTON Peninsula Shire has adopted a five-year plan to become “carbon neutral”. Adoption of the plan last week follows the decision to close the Rye tip by the middle of next year. Waste will be exported from the municipality, effectively reducing the shire’s greenhouse gases and making it easier to gain carbon neutrality accreditation through the federal governmentadministered National Carbon Offset Standard. Councillors opposed to closing the tip say ratepayers will pay up to $60 a year extra for waste to be taken off the peninsula; those in favour put the figure at closer to $30. Emphasis on the shire’s desire to achieve this standard was underlined late last year when it sent a three-person delegation to the 29 November - 11 December United Nations climate change conference in Paris. The mayor, Cr Graham Pittock, Cr Hugh Fraser and the then renewable resources team leader Jessica Wingad returned from the COP21 conference with an invitation for the shire to commit to an international Compact of Mayors to minimise climate change. The shire’s presence at the conference has been criticised as being unnecessary by members of the public and at least two councillors, David Garnock and Andrew Dixon. Cr Pittock and Fraser are yet to present reports to council, although Cr Pittock did invite the pub-

lic to an “open presentation” about the Paris talks on Monday 21 December. The meeting at council’s Roesbud offices was held amid wide criticism of the trip on social media. The requirement for the reports to be made was part of a council motion limiting their councilpaid conference costs to $6000. Ms Wingad’s attendance was described as being to “learn the latest global trends and their potential application locally”. Ms Wingad will now head a new climate change, energy and water unit within the shire. The unit, according to a news release, “is responsible for leading the shire towards carbon neutrality and long-term climate change resilience across the community and organisation”. The same news release says the shire’s carbon neutrality policy “will return a financial payback to the shire and its community”. "The policy sets out how the shire manages greenhouse gas emissions associated with its operations and ensures that its net emissions are equal to zero or better annually,” Cr Pittock is quoted as saying. "It complements the range of policies, strategies, and plans currently in place to address climate change and the built environment, reinforcing a robust approach to investment in emission reduction before offsetting remaining carbon emissions. "Working towards carbon neutrality is a complex and long-term commitment that has the potential to provide both wide-scale community benefit and local environment improvement. "There has been a clear, strong support from

the community for the shire's approach, policy and planned actions throughout the engagement process.” The policy is based on six “pillars”:  Annual review of the shire's greenhouse gas emissions.  Greenhouse gas emission reduction actions.  Consideration of efficient technologies or more energy efficient purchases where greenhouse gas emissions cannot be avoided.  A commitment to offset any remaining emissions through projects within the shire's boundaries.  Inclusive and accessible community engagement on climate change to support community resilience.  A commitment to a flexible, responsive and innovative approach towards investigating new technologies and best practice approaches. Cr Pittock and Cr Fraser backed statements on Australia’s climate change strategy made at the conference by Flinders MP and Environment Minister Greg Hunt at the COP21 conference. While the two councillors and Ms Wingad were in Paris the shire issued a statement saying Cr Pittock saw Australia’s National Climate Resilience and Adaptation Strategy as being “invaluable” to local government and, in particular, the shire, as it includes 10 per cent of Victoria’s coastline. Mornington Peninsula was one of 10 Australian municipalities invited to send delegates to the conference. A description of the National Climate Resilience and Adaptation Strategy quoted by the shire was supplied to it by Mr Hunt’s office.

you really can afford! 2 & 3 BR units from $239,500 -$269,500 Close to the shops and the Marina, Hastings Cove and Westernport Gardens offer an idyllic lifestyle in a new or established brick home with your choice of layout and ﬁttings. Come and experience for yourself the great community atmosphere, with loads of facilities from indoor bowls to computers with fast internet connection. And, of course, your pets are welcome.