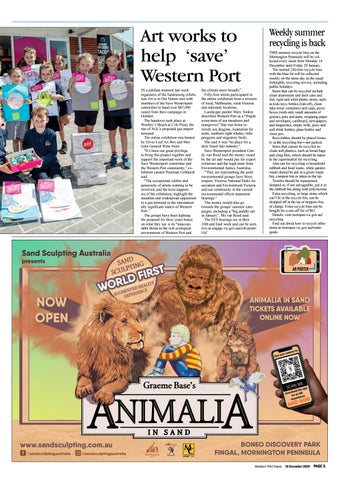 Art works to help ‘save’ Western Port IN a jubilant moment last week organisers of the fundraising exhibition Art is in Our Nature met with members of the Save Westernport committee to hand over $87,000 raised from their campaign in October. The handover took place at Woolley’s Beach at Crib Point, the site of AGL’s proposed gas import terminal. The online exhibition was hosted by Silver Leaf Art Box and Merricks General Wine Store. “It’s been our great privilege to bring this project together and support the important work of the Save Westernport committee and the Western Port community,” exhibition curator Penelope Gebhardt said. “The exceptional calibre and generosity of artists wanting to be involved, and the keen supporters of the exhibition, highlight the steadfast and widespread opposition to a gas terminal in the internationally significant waters of Western Port.” The groups have been fighting the proposal for three years based on what they say is its “unacceptable threat to the rich ecological environment of Western Port and

Weekly summer recycling is back

the climate more broadly”. Fifty-four artists participated in the online exhibition from a mixture of local, Melbourne, rural Victoria and interstate locations. Landscape painter Mary Tonkin described Western Port as a “fragile ecosystem of sea meadows and mangroves” that was home to weedy sea dragons, Australian fur seals, southern right whales, little penguins and migratory birds. She said it was “no place for a dirty fossil fuel industry”. Save Westernport president Candy van Rood said the money raised by the art sale would pay for expert witnesses and the legal team from Environmental Justice Australia, “They are representing the joint environmental groups Save Westernport, Victoria National Parks Association and Environment Victoria and our community in the current environmental effects statement hearings.” The money would also go towards the groups’ summer campaigns, including a “big paddle out in January”, Ms van Rood said. The EES hearings are in their 10th and final week and can be seen live at engage.vic.gov.au/crib-pointIAC

THIS summer recycle bins on the Mornington Peninsula will be collected every week from Monday 14 December until Friday 29 January. The normal 240-litre recycle bins with the blue lid will be collected weekly on the same day as the usual fortnightly recycling service, including public holidays. Items that can be recycled include clean aluminium and steel cans and foil, rigid and solid plastic items, such as kids toys, bottles (lids off), clean take-away containers and cups, pizza boxes (with only small amounts of grease), pots and pans, wrapping paper and envelopes, cardboard, newspapers and magazines, empty milk, juice and soft drink bottles, glass bottles and clean jars. Recyclables should be placed loosely in the recycling bin – not packed. Items that cannot be recycled include soft plastics, such as bread bags and cling film, which should be taken to the supermarket for recycling. Also not for recycling is household rubbish and food waste, while garden waste should be put in a green waste bin, compost bin or taken to the tip. Textiles should be repurposed, donated or, if not salvageable, put it in the rubbish bin along with polystyrene. Extra recycling, or large items which can’t fit in the recycle bin, can be dropped off at the tip or hoppers free of charge. Extra recycle bins can be bought for a one-off fee of $65. Details: visit mornpen.vic.gov.au/ recycling Find out about how to recycle other items at mornpen.vic.gov.au/wasteguide