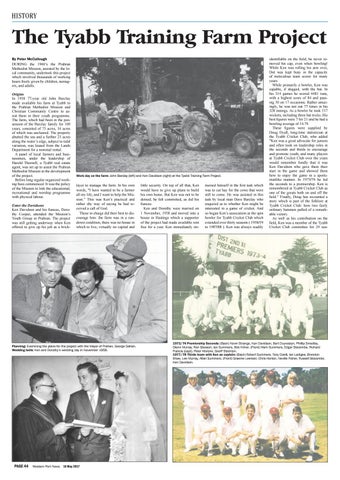 The Tyabb Training Farm Project By Peter McCullough DURING the 1960’s the Prahran Methodist Mission, assisted by the local community, undertook this project which involved thousands of working hours freely given by children, teenagers, and adults. Origins In 1958 77-year old John Barclay made available his farm at Tyabb to the Prahran Methodist Mission and Christian Community Centre to assist them in their youth programme. The farm, which had been in the possession of the Barclay family for 100 years, consisted of 75 acres, 34 acres of which was uncleared. The property abutted the sea and a further 25 acres along the water’s edge, subject to tidal variation, was leased from the Lands Department for a nominal rental. A panel of local farmers and businessmen, under the leadership of Harold Thornell, a Tyabb real estate agent, was set up to assist the Prahran Methodist Mission in the development of the project. Before long regular organized working bees commenced. It was the policy of the Mission to link the educational, recreational and worship programme with physical labour. Enter the Davidsons Ken Davidson and his fiancee, Dorothy Cooper, attended the Mission’s Youth Group in Prahran. The project was still getting underway when Ken offered to give up his job as a brick-

layer to manage the farm. In his own words, “I have wanted to be a farmer all my life, and I want to help the Mission.” This was Ken’s practical and rather shy way of saying he had received a call of God. Those in charge did their best to discourage him: the farm was in a rundown condition, there was no house in which to live, virtually no capital and

Planning: Examining the plans for the project with the Mayor of Prahan, George Gahan. Wedding bells: Ken and Dorothy’s wedding day in November 1958.

little security. On top of all that, Ken would have to give up plans to build his own home. But Ken was not to be denied; he felt committed, as did his fiancee. Ken and Dorothy were married on 1 November, 1958 and moved into a house in Hastings which a supporter of the project had made available rent free for a year. Ken immediately im-

mersed himself in the first task which was to cut hay for the cows that were still to come. He was assisted in this task by local man Dave Barclay who enquired as to whether Ken might be interested in a game of cricket. And so began Ken’s association as the spin bowler for Tyabb Cricket Club which extended over thirty seasons ( 1958/59 to 1987/88 ). Ken was always readily

identifiable on the field; he never removed his cap, even when bowling! While Ken was rolling his arm over, Dot was kept busy in the capacity of meticulous team scorer for many years. While primarily a bowler, Ken was capable, if dogged, with the bat. In his 314 games he scored 4481 runs, with a highest score of 84 and passing 50 on 17 occasions. Rather amazingly, he was not out 77 times in his 328 innings. As a bowler he took 517 wickets, including three hat tricks. His best figures were 7 for 21 and he had a bowling average of 14.79. These figures were supplied by Doug Dyall, long-time statistician at the Tyabb Cricket Club, who added “Ken was a great advocate for juniors and often took on leadership roles in the seconds and thirds to encourage and promote youth, and many players at Tyabb Cricket Club over the years would remember fondly that it was Ken Davidson who gave them their start in the game and showed them how to enjoy the game in a sportsmanlike manner. In 1973/74 he led the seconds to a premiership. Ken is remembered at Tyabb Cricket Club as one of the greats both on and off the field.” Finally, Doug has recounted a story which is part of the folklore at Tyabb Cricket Club: how two fairly ordinary batsmen pulled of a remarkable victory. As well as his contribution on the field, Ken was a member of the Tyabb Cricket Club committee for 29 sea-