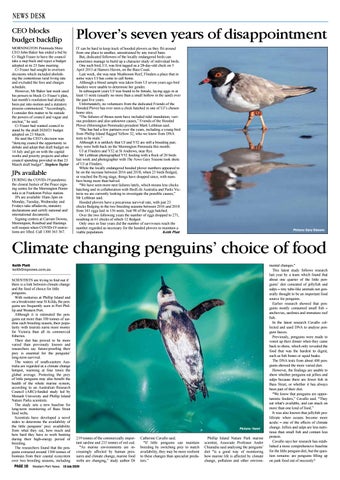 MORNINGTON Peninsula Shire CEO John Baker has ended a bid by Cr Hugh Fraser to have the council take a step back and reject a budget adopted at its 23 June meeting. Cr Fraser had sought to overturn decisions which included abolishing the contentious rural living rate and excluded the fees and charges schedule. However, Mr Baker last week used his powers to block Cr Fraser’s plan, last month’s resolution had already been put into motion and a statutory process commenced. “Accordingly, I consider this matter to be outside the powers of council and vague and unclear,” he said. Cr Fraser had wanted council to stand by the draft 2020/21 budget adopted on 23 March. He said the CEO’s decision was “denying council the opportunity to debate and adopt that draft budget on 14 July and get on with the capital works and priority projects and other council spending provided in that 23 March draft budget”. Stephen Taylor

IT can be hard to keep track of hooded plovers as they flit around from one place to another, unrestrained by any travel bans. But, dedicated followers of the locally endangered birds can sometimes manage to build up a character study of individual birds. One such bird, UJ, was first tagged as a 28-day-old chick on 5 April 2013 at Hamers Haven, on the Bass Coast. Last week, she was near Mushroom Reef, Flinders a place that in some ways UJ has come to call home. Although a blood sample was taken from UJ seven years ago bird banders were unable to determine her gender. In subsequent years UJ was found to be female, laying eggs in at least 11 nests (usually no more than a small hollow in the sand) over the past five years. Unfortunately, no volunteers from the dedicated Friends of the Hooded Plover has ever seen a chick hatched in one of UJ’s chosen home sites. “The failures of theses nests have included tidal inundation, various predators and also unknown causes,” Friends of the Hooded Plover (Mornington Peninsula) president Mark Lethlean said. “She has had a few partners over the years, including a young bird from Phillip Island flagged Yellow 52, who we know from DNA tests to be male.” Although it is unlikely that UJ and Y52 are still a breeding pair, they were both back on the Mornington Peninsula this month. UJ at Flinders and Y52 at St Andrews, near Rye. Mr Lethlean photographed Y52 feeding with a flock of 20 birds last week and photographer with The News Gary Sissons took shots of UJ at Flinders. While the locally endangered hooded plover numbers appeared to be on the increase between 2016 and 2018, when 25 birds fledged, or reached the flying stage, things have dropped since, with numbers being more than halved. “We have seen more nest failures lately, which means less chicks hatching and in collaboration with BirdLife Australia and Parks Victoria we are currently looking to investigate the possible causes,” Mr Lethlean said. Hooded plovers have a precarious survival rate, with just 25 chicks fledging in the two breeding seasons between 2016 and 2018 from 341 eggs laid in 156 nests. Just 98 of the eggs hatched. Over the two following years the number of eggs dropped to 271, resulting in 61 chicks of which 12 fledged. Only once in four years did the number of survivours reach the number regarded as necessary for the hooded plovers to maintain a viable population. Keith Platt

JPs available DURING the COVID-19 pandemic the closest Justice of the Peace signing centre for the Mornington Peninsula is at Frankston Police station. JPs are available 10am-3pm on Monday, Tuesday, Wednesday and Fridays take affadavits, statutory declarations and certify national and international documents. Signing centres at Carrum Downs, Mornington, Rosebud and Hastings will reopen when COVID-19 restrictions are lifted. Call 1300 365 567.

Climate changing penguins’ choice of food Keith Platt keith@mpnews.com.au SCIENTISTS are trying to find out if there is a link between climate change and the food of choice for little penguins. With rookeries at Phillip Island and on a breakwater near St Kilda, the penguins are frequently seen in Port Phillip and Western Port. Although it is estimated the penguins eat more than 100 tonnes of sardine each breeding season, their popularity with tourists earns more money for Victoria than all its commercial fisheries. Their diet has proved to be more varied than previously known and researchers say future-proofing their prey is essential for the penguins’ long-term survival. The waters of south-eastern Australia are regarded as a climate change hotspot, warming at four times the global average. Protecting the prey of little penguins may also benefit the health of the whole marine system, according to an Australian Research Council (ARC)-funded study led by Monash University and Phillip Island Nature Parks scientists. The study sets a new baseline for long-term monitoring of Bass Strait food webs. Scientists have developed a novel index to determine the availability of the little penguins’ prey availability from what they eat, how much and how hard they have to work hunting during their high-energy period of breeding. The researchers found that the penguins extracted around 1300 tonnes of biomass from their coastal ecosystem over two breeding seasons, including

Catherine Cavallo said. “If little penguins can maintain breeding by switching prey to match availability, they may be more resilient to these changes than specialist predators.”

mental changes.&quot; This latest study follows research last year by a team which found that about one quarter of the little penguins’ diet consisted of jellyfish and salps – tiny tube-like animals not generally thought to be an important food source for penguins. Earlier research showed that penguins mostly consumed small fish – anchovies, sardines and immature reef fish. In the latest research Cavallo collected and used DNA to analyse penguin faeces. Previously, penguins were made to vomit up their dinner when they came back to shore, which only revealed the food that was the hardest to digest, such as fish bones or squid beaks. The DNA tests from about 400 penguins showed the more varied diet. However, the findings are unable to show whether penguins eat jellies and salps because there are fewer fish in Bass Strait, or whether it has always been part of their diet. “We know that penguins are opportunistic feeders,” Cavallo said. “They eat what&#39;s available, and can snack on more than one kind of food.” It was also known that jellyfish proliferate when oceans become more acidic – one of the effects of climate change. Jellies and salps are less nutritious than small fish and contain less protein. Cavallo says her research has established a more comprehensive baseline for the little penguin diet, but the question remains: are penguins filling up on junk food out of necessity?