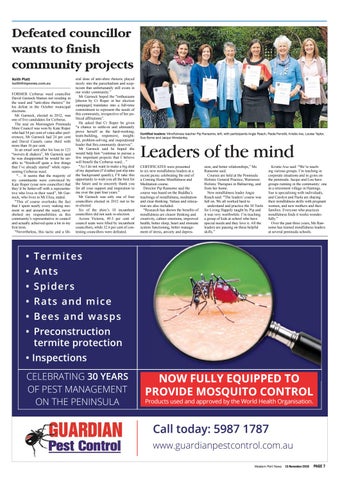 Defeated councillor wants to finish community projects Keith Platt keith@mpnews.com.au FORMER Cerberus ward councillor David Garnock blames not residing in the ward and “anti-shire rhetoric” for his defeat in the October municipal elections. Mr Garnock, elected in 2012, was one of five candidates for Cerberus. The seat on Mornington Peninsula Shire Council was won by Kate Roper who had 54 per cent of votes after preferences; Mr Garnock had 24 per cent and David Cassels came third with more than 16 per cent. In an email sent after his loss to 125 “movers & shakers”, Mr Garnock said he was disappointed he would be unable to “finish-off quite a few things that I’ve already started” while representing Cerberus ward. “… It seems that the majority of my constituents were convinced by Kate Roper (your new councillor) that they’d be better-off with a representative who lives in their ward”, Mr Garnock, who lives in Mt Eliza, stated. “This of course overlooks the fact that I spent nearly every waking moment in and around the ward, never shirked my responsibilities as this community’s representative in council and actually achieved quite a lot in my first term. “Nevertheless, this tactic and a lib-

eral dose of anti-shire rhetoric played nicely into the parochialism and scepticism that unfortunately still exists in our wider community.” Mr Garnock hoped the “enthusiasm [shown by Cr Roper in her election campaign] translates into a full-time commitment to represent the needs of this community, irrespective of her political affiliations”. He asked that Cr Roper be given “a chance to settle-in and ultimately prove herself as the hard-working, team-building, responsive, insightful, problem-solving and inspirational leader that this community deserves”. Mr Garnock said he hoped she would help him “continue to pursue a few important projects that I believe will benefit the Cerberus ward…” “As I do not want to make a big deal of my departure (I’d rather just slip into the background quietly), I’ll take this opportunity to wish you all the best for the future and to sincerely thank you for all your support and inspiration to me over the past four years.” Mr Garnock was only one of four councillors elected in 2012 not to be re-elected. Six of the shire’s 10 incumbent councillors did not seek re-election. Across Victoria, 49.3 per cent of council seats were filled by incumbent councillors, while 32.6 per cent of contesting councillors were defeated.

Leaders of the mind CERTIFICATES were presented to six new mindfulness leaders at a recent picnic celebrating the end of a Coming Home Mindfulness and Meditation course. Director Pip Ransome said the course was based on the Buddha’s teachings of mindfulness, meditation and clear thinking. Values and relaxation are also included. “Research has shown the benefits of mindfulness are clearer thinking and creativity, calmer emotions, improved health, better sleep, heart and immune system functioning, better management of stress, anxiety and depres-

sion, and better relationships,” Ms Ransome said. Courses are held at the Peninsula Holistic General Practice, Warrawee Holistic Therapies in Balnarring, and from her home. New mindfulness leader Angie Roach said: “The leaders’ course was full on. We all worked hard to understand and practice the 30 Tools for Living Happily taught by Pip and it was very worthwhile. I’m teaching a group of kids at school who have special needs and they love it. All the leaders are passing on these helpful skills.”

Kristie Axe said: “We’re teaching various groups. I’m teaching in corporate situations and in gyms on the peninsula. Jacqui and Lou have groups running in the community: one in a retirement village in Hastings. Sue is specialising with individuals, and Carolyn and Paola are sharing their mindfulness skills with pregnant women, and new mothers and their families. Everyone who practices mindfulness finds it works wonderfully.” Over the past three years, Ms Ransome has trained mindfulness leaders at several peninsula schools.

Products used and approved by the World Health Organisation.