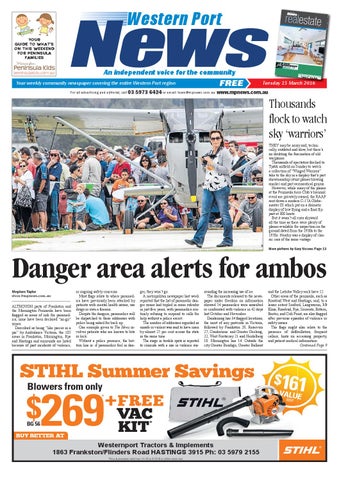 Thousands flock to watch sky ‘warriors’ THEY may be noisy and, technically, outdated and slow, but there’s no doubting the fascination of old warplanes. Thousands of spectators flocked to Tyabb airfield on Sunday to watch a collection of “Winged Warriors” take to the sky in a display that’s part showmanship (stunt planes blowing smoke) and part aeronautical genius. However, while many of the planes at the Peninsula Aero Club’s biennial event are privately owned, the RAAF sent down a modern C-17A Globemaster III which put on a dramatic display of low flying and a final flypast at 300 knots. But it wasn’t all eyes skyward all the time as there were plenty of planes available for inspection on the ground dated from the 1930s to the 1950s. Nearby was a display of classic cars of the same vintage. More pictures by Gary Sissons Page 13

Danger area alerts for ambos Stephen Taylor steve@mpnews.com.au ALTHOUGH parts of Frankston and the Mornington Peninsula have been flagged as areas of risk for paramedics, none have been declared “no-go” zones. Described as being “like pieces in a pie” by Ambulance Victoria, the 105 areas in Frankston, Mornington, Rye and Hastings and surrounds are listed because of past incidents of violence,

or ongoing safety concerns. Most flags relate to where paramedics have previously been attacked by patients with mental health issues, use drugs or own a firearm. Despite the dangers, paramedics will be dispatched to these addresses with police being asked for back up. One example given to The News involves patients who are known to bite or kick. Without a police presence, the bottom line is: if paramedics feel in dan-

ger, they won’t go. A metropolitan newspaper last week reported that the list of paramedic danger zones had tripled in some suburbs in just five years, with paramedics routinely refusing to respond to calls for help without a police escort. The number of addresses regarded as unsafe or violent was said to have risen by almost 25 per cent across the state in the same time. The surge in trouble spots is reported to coincide with a rise in violence sur-

rounding the increasing use of ice. The documents released to the newspaper under freedom on information showed 54 paramedics were assaulted or confronted with violence in 42 days last October and November. Dandenong has 34 flagged locations, the most of any postcode in Victoria, followed by Frankston 29, Reservoir 27, Cranbourne and Greater Geelong, 22, West Footscray 21 and Heidelberg 18. Mornington has 14. Outside the city Greater Bendigo, Greater Ballarat

STIHL Summer Savings Blowers from only

and the Latrobe Valley each have 12. Other areas of the peninsula, such as Rosebud West and Hastings, and, to a lesser extent Seaford, Langwarrin, Mt Eliza, Rosebud, Rye, Sorrento, Bittern, Baxter, and Crib Point, are also flagged after previous episodes of violence or safety issues. The flags might also relate to the presence of defibrillators, frequent callers, hints on accessing property, and patient medical information. Continued Page 9