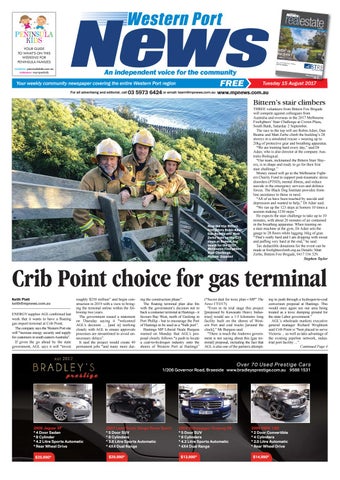 An independent voice for the community For all advertising and editorial, call 03

THREE volunteers from Bittern Fire Brigade will compete against colleagues from Australia and overseas in the 2017 Melbourne Firefighters’ Stair Challenge at Crown Plaza, South Bank, Saturday 2 September. The race to the top will see Robin Adair, Dan Beattie and Matt Zerbe climb the building’s 28 storeys in a simulated rescue – wearing up to 20kg of protective gear and breathing apparatus. “We are training hard every day,” said Dr Adair, who is also director at the company Australis Biological. “Our team, nicknamed the Bittern Stair Slayers, is in shape and ready to go for their first stair challenge.” Money raised will go to the Melbourne Fighters Charity Fund to support post-traumatic stress disorders (PTSD), mental illness, and reduce suicide in the emergency services and defence forces. The Black Dog Institute provides frontline assistance to those in need. “All of us have been touched by suicide and depression and wanted to help,” Dr Adair said. “We run up the 123 steps at Somers 10 times a session making 1230 steps.” He expects the stair challenge to take up to 10 minutes, with about 20 minutes of air contained in the breathing apparatus. When training on a stair machine at the gym, Dr Adair sets the gauge to 28 floors while lugging 16kg of gear. “That’s really hard and I am dripping with sweat and puffing very hard at the end,” he said. Tax deductible donations for the event can be made at firefighterclimb.org.au Details: Matt Zerbe, Bittern Fire Brigade, 0417 556 529. Stephen Taylor

Crib Point choice for gas terminal Keith Platt keith@mpnews.com.au ENERGY supplier AGL confirmed last week that it wants to have a floating gas import terminal at Crib Point. The company says the Western Port site will “increase energy security and supply for customers in south eastern Australia”. If given the go ahead by the state government, AGL says it will “invest

roughly $250 million” and begin construction in 2019 with a view to bringing the terminal online within the following two years. The government issued a statement on Thursday saying it “welcomed AGL’s decision … [and is] working closely with AGL to ensure approvals processes are streamlined to avoid unnecessary delays”. It said the project would create 40 permanent jobs “and many more dur-

ing the construction phase”. The floating terminal plan also fits with the government’s decision not to back a container terminal at Hastings - it favours Bay West, north of Geelong in Port Phillip - but to encourage the Port of Hastings to be used as a “bulk port”. Hastings MP Liberal Neale Burgess warned on Monday that AGL’s proposal closely follows “a push to locate a coal-to-hydrogen industry onto the shores of Western Port at Hastings”

(“Secret deal for toxic plan – MP” The News 17/1/17). “Even in its trial stage this project [proposed by Kawasaki Heavy Industries] would see a 1.5 kilometre long facility built on the shores of Western Port and coal trucks [around the clock],” Mr Burgess said. “There is much the Andrews government is not saying about this [gas terminal] proposal, including the fact that AGL is also one of the partners attempt-

ing to push through a hydrogen-to-coal conversion proposal at Hastings. This would once again see our area being treated as a toxic dumping ground for the state Labor government.” AGL’s wholesale markets executive general manager Richard Wrightson said Crib Point is “best placed to serve Victoria ... as well as take advantage of the existing pipeline network, industrial port facility ...”. Continued Page 4