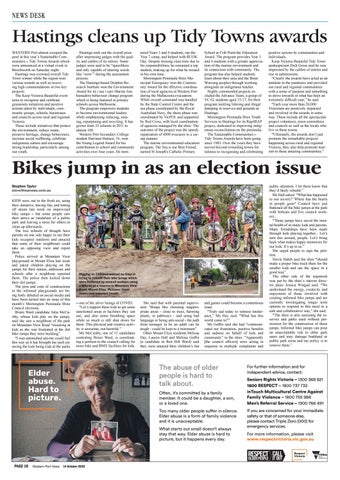 Hastings took out the overall prize after impressing judges with the quality and calibre of its entries. Some judges were said to be “speechless and only capable of uttering words like ‘wow’” during the assessment process. The Hastings-based Dolphin Research Institute won the Environment Award for its i sea i care Marine Ambassadors behaviour change program which is being featured at primary schools across Melbourne. The program empowers students to become environmental leaders while emphasising reducing, reusing, repurposing and recycling. It has grown from 25 schools in 2011 to almost 100. Western Port Secondary College student Harrison Hansen, 16, won the Young Legend Award for his contribution to school and community activities over four years. He men-

tored Years 3 and 4 students, ran the Year 7 camp, and helped with RUOK Day. Despite missing class time due to his responsibilities, he remained a top student, making up for what he missed in his own time. Mornington Peninsula Shire Municipal Emergency won the Community Award for the effective coordination of local agencies at Western Port during the Mallacoota evacuation. While overall command was handled by the State Control Centre and the sea phase coordinated by the Royal Australian Navy, the shore phase was coordinated by VicPOL and supported by Red Cross, with local coordination of agencies managed by the shire. The outcome of the project was the speedy repatriation of 4000 evacuees in a caring manner. The marine environmental education program, The Sea is our Best Friend, earned St Joseph&#39;s Catholic Primary

School at Crib Point the Education Award. The program provides Year 3 and 4 students with a greater appreciation of the marine environment and its connection with community. The program has also helped students learn about their area and the Boon Wurrung peoples through working alongside an indigenous teacher. Highly commended projects included the Advance Team, a group of VCAL students aged 15-17, for their program tackling littering and illegal dumping in reserves and grounds at Hastings. Mornington Peninsula Shire Youth Services in Hastings for its Rap4RAP project, dedicated to improving indigenous reconciliation on the peninsula. The Sustainable Communities – Tidy Towns Awards have been going since 1983. Over the years they have moved beyond rewarding towns for tidiness to recognising and celebrating

positive actions by communities and individuals. Keep Victoria Beautiful Tidy Town spokesperson Dick Gross said he was impressed by the calibre of entries and rise in submissions. “Clearly the awards have acted as an antidote to the pandemic and provided our rural and regional communities with a sense of purpose and something to strive towards in what has been an extremely difficult year,” he said. “Each year more than 20,000 Victorians are positively impacted and involved in the awards in some way. These include all the spectacular project volunteers, town committees and councils as well as the locals who live in these towns. “Ultimately, the awards don’t just promote the remarkable projects happening across rural and regional Victoria, they also help promote tourism to these amazing communities.”

Bikes jump in as an election issue Stephen Taylor steve@mpnews.com.au KIDS were out in the fresh air, using their initiative, having fun, and letting off steam last week on improvised bike ramps – but some people saw their antics as vandalism of a public park and leaving a mess for others to clean up afterwards. The two schools of thought have parents on one side happy to see their kids occupied outdoors and amazed that some of their neighbours could take an opposing view and report them. Police arrived at Mountain View playground in Mount Eliza last week and asked children playing on the jumps for their names, addresses and schools after a neighbour reported them. The police then kicked down their dirt jumps. The pros and cons of constructions in the informal playgrounds are being hotly debated on social media and have been turned into an issue of this month’s Mornington Peninsula Shire Council elections. Briars Ward candidate Julia McCarthy, whose kids play on the jumps, said she saw a neighbour of the park on Mountain View Road “swearing at kids as she was frustrated at the dirt bike ramps they were building”. “I was astonished anyone could feel this way as it has brought me such joy seeing the kids being kids at the parks

Digging in: Children wasted no time in trying to rebuild their bike jumps which were flattened by council workers using a bobcat at a reserve in Mountain View Road, Mount Eliza. Pictures: Yanni (main) and supplied (inset)

– one of the silver linings of COVID. “Let’s support these kids to get some sanctioned areas or facilities they can use, and also some breathing space while so much is still shut down for them. This physical and creative activity is awesome, not harmful.” Ms McCarthy, one of 15 candidates contesting Briars Ward, is coordinating a petition to the council calling for more bike and BMX facilities for kids.

She said that with parental supervision “things like choosing inappropriate areas - close to trees, harming plants, in pathways - and using bad language or being anti-social - the path from teenager to be an adult can be tough - could be kept to a minimum”. Other Mount Eliza residents Melissa Hay, Lauren Hall and Melissa Goffin (a candidate in Red Hill Ward) said they were amazed their children’s fun

and games could become a contentious issue. “Truly sad today to witness intolerance,” Ms Hay said. “What has this world come to?” Ms Goffin said she had “communicated our frustration, positive benefits and sadness on behalf of kids and community” to the shire. “Apparently [the council officers] were acting in response to multiple complaints and

The abuse of older people is hard to talk about. Often, it’s committed by a family member. It could be a daughter, a son, or a loved one. Too many older people suffer in silence. Elder abuse is a form of family violence and it is unacceptable. What starts out small doesn’t always stay that way. Elder abuse is hard to picture, but it happens every day.

public attention. I let them know that they’d likely rebuild.” Ms Hall asked: “What has happened to our society? Where has the hearts in people gone? Council have just flattened all the bike jumps at the park with bobcats and five council workers... “Those jumps have saved the mental health of so many kids and parents. Many friendships have been made through kids playing together... Let’s turn this around, people. Let’s bring back what makes happy memories for our kids. It’s up to us.” She urged people to sign the petition. Stevie Habib said the shire “should make a proper bike track there for the smaller kids and use the space in a good way”. The other side of the argument was put by the shire’s interim director place Jessica Wingad said: “We understand the energy, creativity and enjoyment of those involved with creating informal bike jumps and are currently investigating longer term options to respond to this need in a safe and collaborative way,&quot; she said. “The shire is also assessing the reserves and parks used without permission for the construction of these jumps. Informal bike jumps can pose an unacceptable risk to other park users and may damage bushland or public park areas and our policy is to remove them.”

For further information and for independent advice, contact: Seniors Rights Victoria – 1300 368 821 1800 RESPECT – 1800 737 732 inTouch Multicultural Centre Against Family Violence – 1800 755 988 Men’s Referral Service – 1300 766 491 If you are concerned for your immediate safety or that of someone else, please contact Triple Zero (000) for emergency services. For more information, please visit www.respectvictoria.vic.gov.au