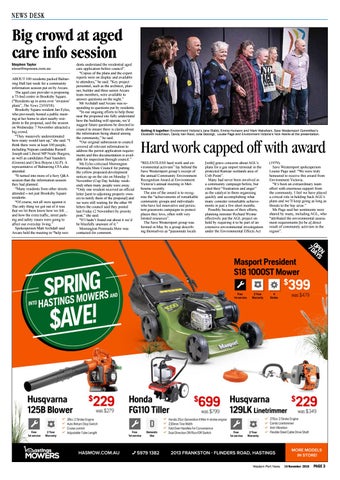 Big crowd at aged care info session Stephen Taylor steve@mpnews.com.au ABOUT 100 residents packed Balnarring Hall last week for a community information session put on by Arcare. The aged care provider is proposing a 75-bed centre in Brooksby Square. (“Residents up in arms over ‘invasion’ plans”, The News 23/10/18). Brooksby Square resident Jan Eyles, who previously hosted a public meeting at her home to alert nearby residents to the proposal, said the session on Wednesday 7 November attracted a big crowd. “They massively underestimated how many would turn up,” she said. “I think there were at least 100 people, including Nepean candidate Russell Joseph and Liberal MP Neale Burgess, as well as candidates Paul Saunders (Greens) and Chris Brayne (ALP). A representative of Balnarring CFA also attended. “It turned into more of a fiery Q&A session than the information session they had planned. “Many residents from other streets attended – not just Brooksby Square residents. “Of course, not all were against it. The only thing we got out of it was that we let them know how we felt … and how the extra traffic, street parking and safety issues were going to affect our everyday living.” Spokesperson Matt Archdall said Arcare held the meeting to “help resi-

dents understand the residential aged care application before council”. “Copies of the plans and the expert reports were on display and available to attendees,” he said. “Key project personnel, such as the architect, planner, builder and three senior Arcare team members, were available to answer questions on the night.” Mr Archdall said Arcare was responding to questions put by residents. “In our ongoing efforts to help those near the proposed site fully understand how the building will operate, we’d suggest future questions be directed to council to ensure there is clarity about the information being shared among the community,” he said. “Our original submission to council covered all relevant information to address the permit application requirements and this documentation is available for inspection through council.” Ms Eyles criticised Mornington Peninsula Shire Council for putting the yellow proposed-development notices up on the site on Monday 5 November (Cup Day holiday weekend) when many people were away. “Only one resident received an official letter [sent to adjoining property owners to notify them of the proposal] and we were still waiting for the other 99 letters the council said they posted last Friday (2 November) by priority post,” she said. “If I hadn’t found out about it we’d be blissfully unaware of it.” Mornington Peninsula Shire was contacted for comment.

Hard work capped off with award “RELENTLESS hard work and environmental activism” lay behind the Save Westernport group’s receipt of the annual Community Environment Recognition Award at Environment Victoria’s annual meeting in Melbourne recently. The aim of the award is to recognise the “achievements of remarkable community groups and individuals who have led innovative and persistent grassroots campaigns to protect places they love, often with very limited resources”. The Save Westernport group was formed in May by a group describing themselves as “passionate locals

[with] grave concerns about AGL’s plans for a gas import terminal in the protected Ramsar wetlands area of Crib Point”. Many had never been involved in a community campaign before, but cited their “frustration and anger” as the catalyst to them organising quickly and accomplishing what many consider remarkable achievements in just a few short months. Possibly because of their efforts, planning minister Richard Wynne effectively put the AGL project on hold by requiring it to be part of an extensive environmental investigation under the Environmental Effects Act

(1979). Save Westernport spokesperson Louise Page said: “We were truly honoured to receive this award from Environment Victoria. “It’s been an extraordinary team effort with enormous support from the community. I feel we have played a critical role in holding back AGL’s plans and we’ll keep going as long as threats to the bay arise.” Ms Page said her sentiments were shared by many, including AGL, who “attributed the environmental assessment requirements [to be a] direct result of community activism in the region”.