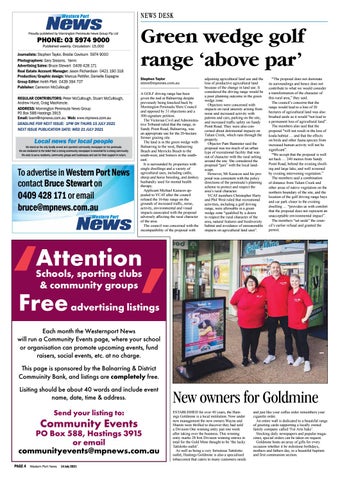 Green wedge golf range ‘above par’ Stephen Taylor steve@mpnews.com.au A GOLF driving range has been given the nod at Balnarring despite previously being knocked back by Mornington Peninsula Shire Council and opposed by 51 objections and a 300-signature petition. The Victorian Civil and Administrative Tribunal ruled that the range, in Sandy Point Road, Balnarring, was an appropriate use for the 20-hectare former grazing site. The land is in the green wedge with Balnarring to the west, Balnarring Beach and Merricks Beach to the south-west, and Somers in the southeast. It is surrounded by properties with single dwellings and a variety of agricultural uses, including cattle, sheep and horse breeding, and donkey husbandry used for mental health therapy. Applicant Michael Kazacos appealed to VCAT after the council refused the 16-bay range on the grounds of increased traffic, noise, activity, environmental and visual impacts associated with the proposal adversely affecting the rural character of the area. The council was concerned with the incompatibility of the proposal with

adjoining agricultural land use and the loss of productive agricultural land because of the change in land use. It considered the driving range would be a poor planning outcome in the green wedge zone. Objectors were concerned with impacts on rural amenity arising from noise and increased activity with patrons and cars, parking on the site, and increased traffic safety on Sandy Point Road. They were also concerned about detrimental impacts on Tulum Creek, which runs through the property. Objector Pam Bannister said the proposal was too much of an urban type of recreational facility that was out of character with the rural setting around the site. She considered the proposal “jars” with the local landscape. However, Mr Kazacos said his proposal was consistent with the policy directions of the peninsula’s planning scheme to protect and respect the area’s rural character. VCAT members Christopher Harty and Phil West ruled that recreational activities, including a golf driving range, were allowable in a green wedge zone “qualified by a desire to respect the rural character of the area, natural features and biodiversity habitat and avoidance of unreasonable impacts on agricultural land uses”.

“The proposal does not dominate its surroundings and hence does not contribute to what we would consider a transformation of the character of this rural area,” they said. The council’s concerns that the range would lead to a loss of 20 hectares of agricultural land was also brushed aside as it would “not lead to a permanent loss of agricultural land”. The members also said that the proposal “will not result in the loss of koala habitat … and that the effects on birds and other fauna species from increased human activity will not be significant”. “We accept that the proposal is well set back … 240 metres from Sandy Point Road, behind the existing dwelling and large lake, and well screened by existing intervening vegetation.” The members said a combination of distance from Tulum Creek and other areas of native vegetation on the northern boundary of the site, and the location of the golf driving range bays and car park closer to the existing dwelling … “provides us with comfort that the proposal does not represent an unacceptable environmental impact”. The members “set aside” the council’s earlier refusal and granted the permit.

Free advertising listings Each month the Westernport News will run a Community Events page, where your school or organisation can promote upcoming events, fund raisers, social events, etc. at no charge. This page is sponsored by the Balnarring & District Commuinity Bank, and listings are completely free. Lisiting should be about 40 words and include event name, date, time & address.

New owners for Goldmine ESTABLISHED for over 40 years, the Hastings Goldmine is a local institution. Now under new management the new owners Wayne and Sharon were thrilled to discover they had sold a Division One winning entry just one week after taking over the business. This winning entry marks 28 first Division winning entries in total for the Gold Mine thought to be ‘the lucky Tattslotto outlet’. As well as being a very fortuitous Tattslotto outlet, Hastings Goldmine is also a specialised tobacconist that caters to many customers needs

and just like your coffee order remembers your cigarette order. An entire wall is dedicated to a beautiful range of greeting cards supporting a locally owned family company called ‘For Arts Sake’. Stocking daily newspapers and popular magazines, special orders can be taken on request. Goldmine hosts an array of gifts for every occasion whether it be milestone birthdays, mothers and fathers day, to a beautiful baptism and first communion section.