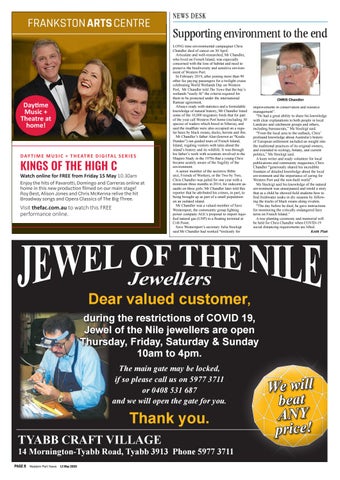 Supporting environment to the end LONG time environmental campaigner Chris Chandler died of cancer on 30 April. Articulate and well-researched, Mr Chandler, who lived on French Island, was especially concerned with the loss of habitat and need to preserve the biodiversity and sensitive environment of Western Port. In February 2019, after joining more than 90 other fee paying passengers for a twilight cruise celebrating World Wetlands Day on Western Port, Mr Chandler told The News that the bay’s wetlands “easily fit” the criteria required for them to be protected under the international Ramsar agreement. Always ready with statistics and a formidable knowledge of natural history, Mr Chandler listed some of the 10,000 migratory birds that for part of the year call Western Port home (including 30 species of waders which breed in Siberia), and said the mudflats were also occupied on a regular basis by black swans, ducks, herons and ibis. Mr Chandler’s father Alan (known as “Koala Dundee”) ran guided tours of French Island, Island, regaling visitors with tales about the island’s history and its wildlife. It was through his father’s work with scientists involved in the Shapiro Study in the 1970s that a young Chris became acutely aware of the fragility of the environment. A senior member of the secretive Bible sect, Friends of Workers, or the Two by Two, Chris Chandler was jailed for one year with a minimum three months in 2014, for indecent assaults on three girls. Mr Chandler later told this reporter that he attributed his crimes, in part, to being brought up as part of a small population on an isolated island. Mr Chandler was a valued member of Save Westernport, the community group fighting power company AGL’s proposal to import liquified natural gas (LNP) to a floating terminal at Crib Point. Save Westernport’s secretary Julia Stockigt said Mr Chandler had worked “tirelessly for

CHRIS Chandler improvements in conservation and resource management”. “He had a great ability to share his knowledge with clear explanations to both people in local Landcare and catchment groups and others, including bureaucrats,” Ms Stockigt said. “From the local area to the outback, Chris’ profound knowledge about Australia’s history of European settlement included an insight into the traditional practices of its original owners, and extended to ecology, botany, and current politics,” Ms Stockigt said. A keen writer and ready volunteer for local publications and community magazines, Chris Chandler “generously shared his incredible fountain of detailed knowledge about the local environment and the importance of caring for Western Port and the non-built world”. Ms Stockigt said his knowledge of the natural environment was unsurpassed and retold a story that as a child he showed field students how to find freshwater soaks in dry seasons by following the tracks of black swans along rivulets. “The day before he died, he gave instructions for monitoring the critically endangered fairy terns on French Island.” A tree planting ceremony and memorial will be held for Chris Chandler when COVID-19 social distancing requirements are lifted. Keith Platt

We will beat ANY price!