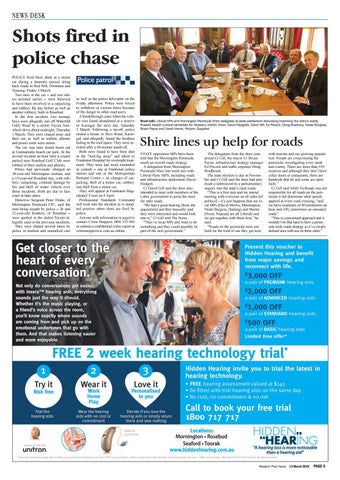 Shots fired in police chase POLICE fired three shots at a stolen car during a dramatic pursuit along back roads in Red Hill, Dromana and Teurong, Friday 2 March. Two men in the car – and two others arrested earlier – were believed to have been involved in a carjacking and robbery the day before as well as another robbery, both in Rosebud. In the first incident, two teenage boys were allegedly run off Waterfall Gully Road by a stolen Toyota fourwheel-drive about midnight, Thursday 1 March. They were chased away and their car, as well as wallets, phones and power tools were stolen. The car was later found burnt out at Gunnamatta beach car park. In the second incident an hour later a couple parked near Rosebud Golf Club were robbed of their wallets and phones. Police had previously charged an 18-year-old Mornington woman, and a 15-year-old Rosebud boy, with robbery, carjacking, criminal damage by fire and theft of motor vehicle over those incidents. Both are due to face court at later dates. Detective Sergeant Peter Drake, of Mornington Peninsula CIU, said the men being sought by police – 26 and 22-year-old brothers, of Rosebud – were spotted in the stolen Toyota allegedly used in the previous incidents. They were chased several times by police in marked and unmarked cars

Police patrol as well as the police helicopter on the Friday afternoon. Police were forced to withdraw at various times because of the danger to other road users. A breakthrough came when the vehicle was found abandoned at a reserve in Karingal the next day, Saturday 3 March. Following a tip-off, police raided a house in Skye Road, Karingal, and allegedly found the brothers hiding in the roof space. They were arrested after a 40-minute stand-off. Both were found to have been shot in the “mid-leg areas” and taken to Frankston Hospital for overnight treatment. They were last week remanded in custody – one at Frankston police station and one at the Metropolitan Remand Centre – on charges of carjacking, theft of a motor car, robbery and theft from a motor car. They will appear at Frankston Magistrates’ Court on 4 April. Professional Standards Command will look into the incident as is standard practice when shots are fired by police. Anyone with information is urged to contact Crime Stoppers 1800 333 000 or submit a confidential crime report at crimestoppersvic.com.au online.

Shire lines up help for roads STATE opposition MPs have been told that the Mornington Peninsula needs an overall roads strategy. A delegation from Mornington Peninsula Shire last week met with Liberal Party MPS, including roads and infrastructure spokesman David Hodgett. Cr David Gill said the shire also intended to meet with members of the Labor government to press the need for safer roads. “We had a good hearing [from the opposition] and they basically said they were interested and would look into it,” Cr Gill told The News. “They’re local MPs and want to do something and they could possibly be part of the next government.”

The delegation from the shire comprised Cr Gill, the mayor Cr Bryan Payne, infrastructure strategy manager Ed Pocock and traffic engineer Doug Bradbrook. The state election is due in November and Cr Gill said the shire had also made a submission to a parliamentary inquiry into the state’s rural roads. “This is a first step and we intend meeting with everyone on all sides [of politics] – it’s just happens that our local MPs [David Morris, Mornington, Neale Burgess, Hastings and Martin Dixon, Nepean] are all Liberals and we got together with them first,” he said. “Roads on the peninsula were not built for the kind of use they get now,

with tourists and our growing population. People are crisscrossing the peninsula, investigating every nook and cranny. There are more than 350 wineries and although they don’t have cellar doors or restaurants, there are hundreds that do and some are open daily.” Cr Gill said while VicRoads was not responsible for all roads on the peninsula it did determine what speeds applied at every road crossing, “and we have examples of 80 kilometres an hour and 100, sometimes on unsealed roads”. “This is a piecemeal approach and it wouldn’t be that hard to have a peninsula-wide roads strategy as it’s a clearly defined area with sea on three sides.”