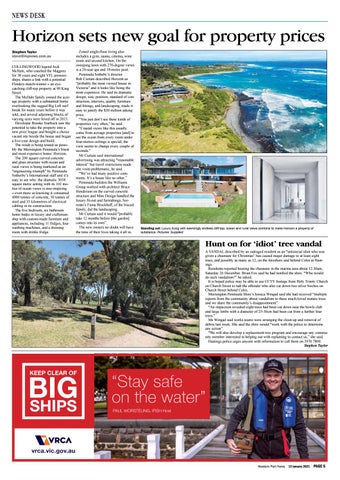 Horizon sets new goal for property prices Stephen Taylor steve@mpnews.com.au COLLINGWOOD legend Jock McHale, who coached the Magpies for 38 years and eight VFL premierships, shares a link with a potential Flinders match-winner – an eyecatching cliff-top property at 90 King Street. The McHale family owned the acreage property with a substantial home overlooking the rugged Big Left surf break for many years before it was sold, and several adjoining blocks of varying sizes were hived off in 2015. Developer Brooke Starbuck saw the potential to take the property into a new price league and bought a choice vacant site beside the house and began a five-year design and build. The result is being touted as possibly the Mornington Peninsula’s finest and most expensive home: Horizon. The 200 square curved concrete and glass structure with ocean and rural views is being marketed as an “engineering triumph” by Peninsula Sotherby’s International staff and it’s easy to see why: the dramatic 5058 square metre setting with its 102 metres of ocean views is awe-inspiring – even more so knowing it consumed 4000 tonnes of concrete, 50 tonnes of steel and 35 kilometres of electrical cabling in its construction. The five bedroom, six bathroom home basks in luxury and craftsmanship with custom-made furniture and appliances, including 11 fridges, four washing machines, and a dressing room with drinks fridge.

Zoned single-floor living also includes a gym, sauna, cinema, wine room and second kitchen. On the sweeping lawn with 270-degree views is a 20-seat spa and 18-metre pool. Peninsula Sotheby’s director Rob Curtain described Horizon as “probably the most viewed house in Victoria” and it looks like being the most expensive. He said its dramatic design, size, position, standard of construction, interiors, quality furniture and fittings, and landscaping, made it easy to justify the $30 million asking price. “You just don’t see these kinds of properties very often,” he said. “Coastal views like this usually come from acreage properties [and] to see the ocean from every room under four-metres ceilings is special; the view seems to change every couple of seconds.” Mr Curtain said international advertising was attracting “reasonable interest” but travel restrictions made site visits problematic, he said. “We’ve had many positive comments. It’s a house like no other.” Peninsula builders the Williams Group worked with architect Bruce Henderson on the curved concrete structure and Mim Design handled the luxury fit-out and furnishings. Sorrento’s Fiona Brockhoff, of the biscuit family, did the landscaping. Mr Curtain said it would “probably take 12 months before [the garden] comes into its own”. The new owners no doubt will have the time of their lives taking it all in.

Hunt on for ‘idiot’ tree vandal A VANDAL described by an outraged resident as an “antisocial idiot who was given a chainsaw for Christmas” has caused major damage to at least eight trees, and possibly as many as 12, on the foreshore and behind Coles at Hastings. Residents reported hearing the chainsaw in the marina area about 12.30am, Saturday 26 December. Brian Fox said he had notified the shire. “Who would do such vandalism?” he asked. It is hoped police may be able to use CCTV footage from Holy Trinity Church on Church Street to nab the offender who also cut down two silver birches on Church Street behind Coles. Mornington Peninsula Shire’s Jessica Wingad said she had received “multiple reports from the community about vandalism to these much-loved mature trees and we share the community’s disappointment”. “An inspection revealed eight trees had been cut down near the bowls club and large limbs with a diameter of 25-30cm had been cut from a further four trees.” Ms Wingad said works teams were arranging the clean-up and removal of debris last week. She said the shire would “work with the police to determine any action”. “We will also develop a replacement tree program and encourage any community member interested in helping out with replanting to contact us,” she said. Hastings police urges anyone with information to call them on 5970 7800. Stephen Taylor