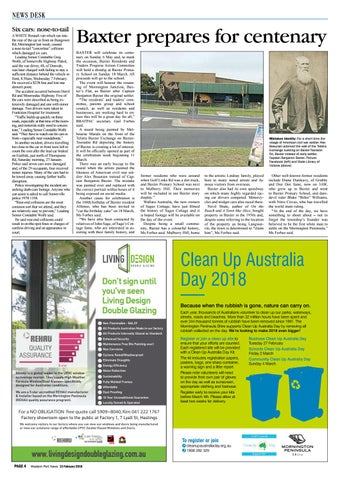 A WHITE Renault van which ran into the rear of the car in front on Bungower Rd, Mornington last week, caused a nose-to-tail “concertina” collision which damaged six cars. Leading Senior Constable Greg Wolfe, of Somerville Highway Patrol, said the van driver, 48, of Donvale, was later charged with failing to stay a sufficient distance behind the vehicle in front, 8.50am, Wednesday 7 February. He received a $238 fine and lost one demerit point. The accident occurred between Derril Rd and Moorooduc Highway. Five of the cars were described as being extensively damaged and one with minor damage. Two drivers were taken to Frankston Hospital for treatment. “Traffic builds up quickly on these roads, especially at that time of the morning, and motorists really need to concentrate,” Leading Senior Constable Wolfe said. “They have to watch out for cars in front – especially near roundabouts.” In another incident, drivers travelling too close to the car in front were left to count the cost after the lead car braked on Eastlink, just north of Thompsons Rd, Saturday morning, 27 January. Police said seven cars were damaged and, of the 29 occupants, four received minor injuries. Many of the cars had to be towed away causing further traffic disruption. Police investigating the incident are seeking dash-cam footage. Anyone who can assist is asked to call Somerville police 5978 1358. “Rear-end collisions are the most common sort that we attend, and they are relatively easy to prevent,” Leading Senior Constable Wolfe said. He said rear-end collisions could result in on-the-spot fines or charges of careless driving and an appearance in court.

Baxter prepares for centenary BAXTER will celebrate its centenary on Sunday 6 May and, to mark the occasion, Baxter Residents and Traders Progress Action Committee will hold a shindig at Baxter Primary School on Sunday 18 March. All proceeds will go to the school. The event will honour the renaming of Mornington Junction, Baxter’s Flat, as Baxter after Captain Benjamin Baxter the original settler. “The residents’ and traders’ committee, parents group and school council, as well as residents and businesses, are working hard to ensure this will be a great day for all,” BRATPAC secretary Gail Forbes said. A mural being painted by Melbourne Murals on the front of the Telstra Baxter Exchange on BaxterTooradin Rd depicting the history of Baxter is creating a lot of interest. It will be officially opened as part of the celebration week beginning 11 March. There was an early hiccup to the mural when the artists painted the likeness of American civil war soldier Alex Beaurain instead of Captain Benjamin Baxter. The mistake was painted over and replaced with the correct portrait within hours of it being exposed on social media. Another cause for celebration is the 100th birthday of Baxter resident Alfonso, who has been invited to “cut the birthday cake” on 18 March, Ms Forbes said. “We have also been contacted by relatives of John Sage, of Sage’s Cottage fame, who are interested in assisting with their family history, and

Mistaken identity: For a short time the visage of American civil war soldier Alex Beaurain adorned the wall of the Telstra Exchange building on Baxter-Tooradin Rd, Baxter instead of early settler, Captain Benjamin Baxter. Picture: Facebook (left) and State Library of Victoria (above)

former residents who were around when Golf Links Rd was a dirt track, and Baxter Primary School was next to Mulberry Hill. Their memories will be included in our Baxter story display.” Wallara Australia, the new owners of Sages Cottage, have just filmed the history of Sages Cottage and it is hoped footage will be available on the day of the event. Despite being a small community, Baxter has a colourful history, Ms Forbes said. Mulberry Hill, home

REHAU is a global leader in the UPVC window technology market. They supply High Weather Formula Window/Door frames– specifically designed for Australian conditions. We are a 5 star accredited REHAU manufacturer & Installer based on the Mornington Peninsula (REHAU quality assurance program).

to the artistic Lindsay family, played host to many noted artists and famous visitors from overseas. Baxter also had its own speedway on which many highly regarded racing car drivers competed. Motorcycles and midget cars also raced there. Nevil Shute, author of On the Beach and A Town like Alice, bought property in Baxter in the 1950s and, despite some referring to the location of the property as being Langwarrin, the town is determined to “claim him”, Ms Forbes said.

Clean Up Australia Day 2018 Because when the rubbish is gone, nature can carry on. Each year, thousands of Australians volunteer to clean up our parks, waterways, streets, roads and beaches. More than 32 million hours have been spent and over 344 thousand tonnes of rubbish have been removed since 1991. The Mornington Peninsula Shire supports Clean Up Australia Day by removing all rubbish collected on the day. We’re looking to make 2018 even bigger! Register or join a clean up site to ensure that your efforts are counted. Each registered site will be provided with a Clean Up Australia Day Kit. The kit includes registration papers, posters, bags, one sharp container, a warning sign and a litter report. Please note volunteers will need to provide their own pair of gloves on the day as well as sunscreen, appropriate clothing and footwear. Register early to receive your kits before March 4th. Please allow at least two weeks for delivery.

For a NO OBLIGATION free quote call 5909−8040, Kim 041 222 1767 or Michael 0407 820 447. Factory showroom open to the public at Factory 1, 7 Lyall St, Hastings We welcome visitors to our factory where you can view our windows and doors being manufactured or view our extensive range of affordable UPVC Double Glazed Windows and Doors.

To register or join

Other well-known former residents include Diane Dunleavy, of Grubby and Dee Dee fame, now on 3AW, who grew up in Baxter and went to Baxter Primary School, and daredevil rider Blake “Bilko” Williams, with Nitro Circus, who has travelled the world stunt riding. “At the end of the day, we have something to shout about – not to forget the township’s founder was believed to be the first white man to settle on the Mornington Peninsula,” Ms Forbes said.