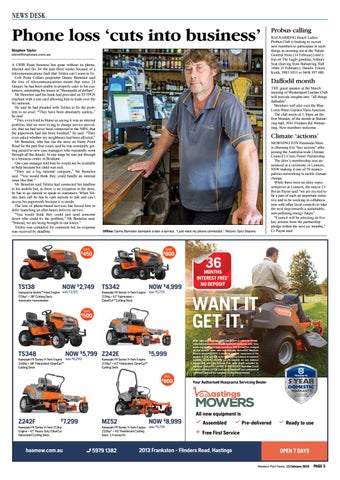 Phone loss ‘cuts into business’ Stephen Taylor steve@mpnews.com.au A CRIB Point business has gone without its phone, internet and fax for the past three weeks because of a telecommunications fault that Telstra can’t seem to fix. Crib Point Cellars proprietor Danny Bemelen said the loss of telecommunications meant that since 24 January he has been unable to properly cater to his customers, estimating his losses at “thousands of dollars”. Mr Bemelen said his bank had provided an EFTPOS machine with a sim card allowing him to trade over the 4G network. He said he had pleaded with Telstra to fix the problem to no avail. “They have been absolutely useless,” he said. “They even tried to blame us saying it was an internal problem; that we were trying to change service providers; that we had never been connected to the NBN, that the paperwork had not been finished,” he said. “They even asked whether my neighbours had been affected.” Mr Bemelen, who has run the store on Stony Point Road for the past four years, said he was constantly getting passed to new case managers who repeatedly went through all the details. At one stage he was put through to a business centre in Brisbane. One case manager told him he would not be available to help because his child was sick. “They are a big national company,” Mr Bemelen said. “You would think they could handle an internal issue like that.” Mr Bemelen said Telstra had connected his landline to his mobile but, as there is no reception in the store, he has to go outside to speak to customers. When Telstra does call he has to rush outside to talk and can’t access his paperwork because it is inside. The loss of phone-based services has forced him to defer launching an after-hours delivery service. “You would think they could just send someone down who could fix the problem,” Mr Bemelen said. “Instead, we are being brought to our knees.” Telstra was contacted for comment but no response was received by deadline.

THE guest speaker at the March meeting of Westernport Garden Club will provide insights into “all things daffodils”. Members will also visit the Blue Lotus Water Garden Yarra Junction. The club meets at 1.30pm on the first Monday of the month at Balnarring hall, 3041 Flinders Rd. Balnarring. New members welcome.

MORNINGTON Peninsula Shire is choosing five “key actions” after joining the Australia-wide Climate Council’s Cities Power Partnership. The shire’s membership was announced at a ceremony in Lismore, NSW making it one of 70 municipalities networking to tackle climate change. While there were no shire representatives at Lismore, the mayor Cr Bryan Payne said “we are excited to be a part of such an important initiative and to be working in collaboration with other local councils to take the next step towards a sustainable, non-polluting energy future”. “Council will be selecting its five key actions from the partnership pledge within the next six months,” Cr Payne said.

BALNARRING Beach Ladies Probus Club is looking to recruit new members to participate in such things as morning tea at the Tulum General Store (14 February) and a trip on The Eagle gondola, Arthurs Seat (leaving from Balnarring Hall 10am 21 February). Details: Eileen Keith, 5983 5053 or 0408 397 480.

WANT IT, GET IT. Offer valid until 31 March 2018. See instore or online for details www.husqvarna.com.au ^Credit approved applicants only; fees, terms and conditions apply including a $99 Annual Fee, charged on the account open date and annually thereafter. Minimum finance amount $1,999. A minimum monthly repayment of the greater of $30 and 3% of the outstanding balance is required. Interest, currently 23.99% p.a., is payable on any balance outstanding after the Interest Free term. Credit provided by Lombard Finance Pty Ltd ABN 31 099 651 877 Australian Credit Licence number 247415 (Lombard). Lombard® is a trademark of Lombard. Lombard is a subsidiary of FlexiGroup Limited.

All new equipment is