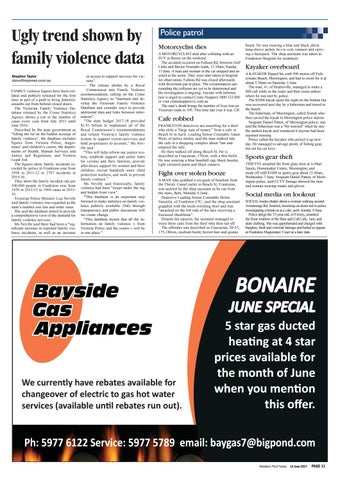 Ugly trend shown by family violence data Stephen Taylor steve@mpnews.com.au FAMILY violence figures have been collated and publicly released for the first time as part of a push to bring domestic assaults out from behind closed doors. The Victorian Family Violence Database released by the Crime Statistics Agency shows a rise in the number of cases every year from July 2011 until June 2016. Described by the state government as “lifting the lid on the hidden scourge of family violence”, the database includes figures from Victoria Police, magistrates’ and children’s courts, the departments of Health, Human Services and Justice and Regulation, and Victoria Legal Aid. The figures show family incidents recorded by police in Frankston rose from 1938 in 2011-12 to 2707 incidents in 2015-16. They show the family incident rate per 100,000 people in Frankston rose from 1470 in 2011-12 to 1969 cases in 201516. Victorian Police Minister Lisa Neville said family violence was regarded as the state’s number one law and order issue. She said the database aimed to provide a comprehensive view of the demand for family violence services. Ms Neville said there had been a “significant increase in reported family violence incidents, as well as an increase

in access to support services for victims”. The release abides by a Royal Commission into Family Violence recommendation, calling on the Crime Statistics Agency to “maintain and develop the Victorian Family Violence Database and consider ways to provide additional data and links between information”. “The state budget 2017-18 provided $1.91 billion to implement all of the Royal Commission’s recommendations and reform Victoria’s family violence system to support victim-survivors and hold perpetrators to account,” Ms Neville said. “This will help reform our justice system, establish support and safety hubs for victims and their families, provide after-hours support for women and their children, recruit hundreds more child protection workers, and work to prevent family violence.” Ms Neville said historically, family violence had been “swept under the rug and hidden from view”. “This database is an important step forward to make statistics on family violence publicly available. Only through transparency and public discussion will we create change. “This database means that all the information on family violence – from Victoria Police and the courts – will be in one place.”

Police patrol Motorcyclist dies A MOTORCYCLIST died after colliding with an SUV in Baxter on the weekend. The accident occurred on Fultons Rd, between Golf Links and Baxter-Tooradin roads, 11.10am, Sunday 11 June. A man and woman in the car stopped and assisted at the scene. They were later taken to hospital for observation. Fultons Rd was closed afterwards with diversions put in place. The circumstances surrounding the collision are yet to be determined and the investigation is ongoing. Anyone with information is urged to contact Crime Stoppers 1800 333 000 or visit crimestoppersvic.com.au The man’s death brings the number of lives lost on Victorian roads to 109. This time last year it was 128.

Cafe robbed FRANKSTON detectives are searching for a thief who stole a “large sum of money” from a cafe in Beach St in April. Leading Senior Constable Adam West, of police media, said the man walked into the cafe in a shopping complex about 7am and emptied the safe. He then walked off along Beach St. He is described as Caucasian, 170cm, with a thin build. He was wearing a blue baseball cap, black hoodie, light coloured pants and black runners.

Fight over stolen booze A MAN who grabbed a six-pack of bourbon from the Thirsty Camel outlet in Beach St, Frankston, was tackled by the shop assistant as he ran from the store, 8pm, Monday 6 June. Detective Leading Senior Constable Helen Vanzetta, of Frankston CIU, said the shop assistant grappled with the knife-wielding thief and was “smacked on the left side of his face receiving a fractured cheekbone”. Despite his injuries, the assistant managed to wrest three cans from the thief who then ran off. The offender was described as Caucasian, 20-25, 175-180cm, medium build, brown hair and goatee

beard. He was wearing a blue and black check long-sleeve jacket, hi-vis vest, runners and carrying a backpack. The shop assistant was taken to Frankston Hospital for treatment.

Kayaker overboard A KAYAKER flipped his craft 500 metres off Fishermans Beach, Mornington, and had to swim for it at about 5.30pm on Saturday 3 June. The man, 41, of Healesville, managed to make a 000 call while in the water and then swam ashore where he was met by police. The $1000 kayak spent the night on the bottom but was recovered next day by a fisherman and towed to the beach. The fisherman, of Mornington, called friends who then carried the kayak to Mornington police station. Sergeant Daniel Patten, of Mornington police, was told the fisherman was a “bit worried” when he saw the sunken kayak and wondered if anyone had been reported missing. Police called the kayaker who picked it up next day. He managed to salvage plenty of fishing gear, but not his car keys.

Social media on lookout SOCIAL media chatter about a woman walking around Armstrongs Rd, Seaford, knocking on doors led to police investigating a break-in at a cafe, early Sunday 4 June. Police allege the 37-year-old, of Fitzroy, smashed the front window of the Bear and Cub Cafe, 1am, and stole clothing. She was apprehended and charged with burglary, theft and criminal damage and bailed to appear at Frankston Magistrates’ Court at a later date.