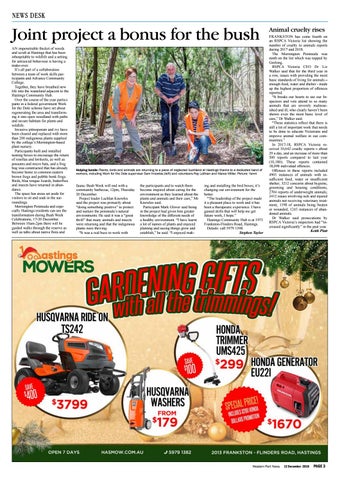 Joint project a bonus for the bush AN impenetrable thicket of weeds and scrub at Hastings that has been inhospitable to wildlife and a setting for antisocial behaviour is having a make-over. It’s all part of a collaboration between a team of work skills participants and Advance Community College. Together, they have breathed new life into the wasteland adjacent to the Hastings Community Hub. Over the course of the year participants in a federal government Work for the Dole scheme have set about regenerating the area and transforming it into open woodland with paths and secure habitats for plants and wildlife. Invasive pittosporum and ivy have been cleared and replaced with more than 200 indigenous plants supplied by the college’s Mornington-based plant nursery. Participants built and installed nesting boxes to encourage the return of rosellas and lorikeets, as well as possums and micro bats, and a frog bog was constructed that has already become home to common eastern brown frogs and pobble bonk frogs. Birds, blue tongue lizards, butterflies and insects have returned in abundance. The space has areas set aside for visitors to sit and soak in the surroundings. Mornington Peninsula and especially Hastings residents can see the transformation during Bush Week Celebrations, 17-20 December. Between 10am-2pm there will be guided walks through the reserve as well as talks about native flora and

Helping hands: Plants, birds and animals are returning to a piece of neglected bushland at Hastings thanks to a dedicated band of workers, including Work for the Dole supervisor Sam Knowles (left) and volunteers Ray Lothian and Maree Millar. Picture: Yanni

fauna. Bush Week will end with a community barbecue, 12pm, Thursday 20 December. Project leader Lachlan Knowles said the project was primarily about “doing something positive” to protect and nurture the peninsula’s natural environments. He said it was a “great thrill” that many animals and insects were returning and that the indigenous plants were thriving. “It was a real buzz to work with

the participants and to watch them become inspired about caring for the environment as they learned about the plants and animals and their care,” Mr Knowles said. Participant Mark Glover said being in the project had given him greater knowledge of the different needs of a healthy environment. “I have learnt a lot of names of plants and enjoyed planting and seeing things grow and establish,” he said. “I enjoyed mak-

ing and installing the bird boxes; it’s changing our environment for the better. “The leadership of the project made it a pleasant place to work and it has been a therapeutic experience. I have gained skills that will help me get future work, I hope.” Hastings Community Hub is at 1973 Frankston-Flinders Road, Hastings. Details: call 5979 1398. Stephen Taylor

Animal cruelty rises FRANKSTON has come fourth on an RSPCA Victoria list showing the number of cruelty to animals reports during 2017 and 2018. The Mornington Peninsula was ninth on the list which was topped by Geelong. RSPCA Victoria CEO Dr Liz Walker said that for the third year in a row, issues with providing the most basic standards of living for animals – enough food, water and shelter - made up the highest proportion of offences reported. “It breaks our hearts to see our Inspectors and vets attend to so many animals that are severely malnourished and ill, who clearly haven’t been shown even the most basic level of care,” Dr Walker said. “These statistics reflect that there is still a lot of important work that needs to be done to educate Victorians and improve animal welfare in our communities.” In 2017-18, RSPCA Victoria received 10,642 cruelty reports – about 29 a day, and an increase of more than 500 reports compared to last year (10,180). These reports contained 18,098 individual offences. Offences in these reports included 4905 instances of animals with insufficient food, water or insufficient shelter; 3212 concerns about hygiene, grooming and housing conditions; 2704 reports of underweight animals; 2412 issues involving sick and injured animals not receiving veterinary treatment; 1198 of animals being beaten or wounded; 1245 instances of abandoned animals. Dr Walker said prosecutions by RSPCA Victoria’s inspectors had “increased significantly” in the past year. Keith Platt