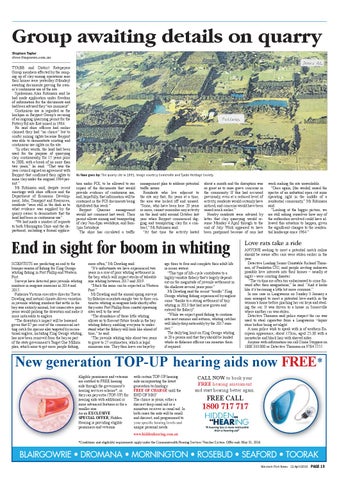 Group awaiting details on quarry Stephen Taylor steve@mpnews.com.au TYABB and District Ratepayers Group members affected by the ramping up of clay mining operations near their homes were yesterday (Monday) awaiting documents proving the ownerâ&#x20AC;&#x2122;s continuous use of the site. Spokesman Alan Robinson said he had made application under freedom of information for the documents and had been advised they â&#x20AC;&#x153;are imminentâ&#x20AC;?. Continuous use is regarded as the linchpin in Bayport Groupâ&#x20AC;&#x2122;s securing of an ongoing quarrying permit for the Pottery Rd site first mined in 1964. He said shire officers had earlier claimed they had â&#x20AC;&#x153;no choiceâ&#x20AC;? but to confer mining rights because Bayport was able to demonstrate existing and continuous use rights on the site. â&#x20AC;&#x153;In other words, the land had been used for the purpose of quarrying clay, continuously, for 15 years prior to 2008, with a break of no more than two years,â&#x20AC;? he said. â&#x20AC;&#x153;That was the year council signed an agreement with Bayport that confirmed their rights to mine clay under the original 1964 permit.â&#x20AC;? Mr Robinson said, despite recent meetings with shire officers and the Department of Economic Development, Jobs, Transport and Resources, residents â&#x20AC;&#x153;were still in the dark as to what evidence was supplied by the quarry owner to demonstrate that the land had been in continuous useâ&#x20AC;?. â&#x20AC;&#x153;We had made a number of requests to both Mornington Shire and the department, including a formal applica-

As time goes by: The quarry site in 1991. Image courtesy Somerville and Tyabb Heritage Society.

tion under FOI, to be allowed to see copies of the documents that would provide evidence of continuous use, and, hopefully, that information will be contained in the FOI documents being distributed this week.â&#x20AC;? Bayport Quarries management would not comment last week. Their permit allows mining and transporting of clay 7am-6pm weekdays, and 8am1pm Saturdays. The shire has circulated a traffic

management plan to address potential traffic issues. Residents who live adjacent to the site say that, for years at a time, the area was locked off and unused. â&#x20AC;&#x153;Some, who have been here 20 years or more, cannot remember any activity on the land until around October last year when Bayport commenced digging and transporting clay for a contract,â&#x20AC;? Mr Robinson said. â&#x20AC;&#x153;At that time the activity lasted

about a month and the disruption was so great as to raise grave concerns in the community. If this had occurred previously, even at a reduced level of activity, residents would certainly have noticed, and concerns would have been raised much earlier.â&#x20AC;? Nearby residents were advised by letter that clay quarrying would resume Monday 4 April through to the end of July. Work appeared to have been postponed because of rain last

End in sight for boom in whiting SCIENTISTS are predicting an end to the bumper season of fishing for King George whiting fishing in Port Phillip and Western Port. Surveys have detected poor juvenile whiting numbers in seagrass nurseries in 2014 and 2015. Fisheries Victoria executive director Travis Dowling said natural climate-driven variation in juvenile whiting numbers that settle in the bay was entirely normal, but consecutive poor years would prolong the downturn and make it more noticeable to anglers. â&#x20AC;&#x153;The downturnâ&#x20AC;&#x2122;s impact will be lessened given that 87 per cent of the commercial netting catch for species also targeted by recreational anglers, including King George whiting, has now been removed from the bay as part of the state governmentâ&#x20AC;&#x2122;s Target One Million plan, which aims to get more people fishing,

more often,â&#x20AC;? Mr Dowling said. â&#x20AC;&#x153;Itâ&#x20AC;&#x2122;s unfortunate we have experienced two years in a row of poor whiting settlement in the bay, which will impact stocks of takeable size whiting between 2017 and 2019. â&#x20AC;&#x153;Much the same can be expected in Western Port.â&#x20AC;? Mr Dowling said the annual spring surveys by fisheries scientists sample two to three centimetre whiting in seagrass beds shortly after they enter Port Phillip from coastal spawning sites well to the west. â&#x20AC;&#x153;The abundance of these little whiting allows us to forecast future trends in the bay whiting fishery, enabling everyone to understand what the fishery will look like ahead of time,â&#x20AC;? he said. â&#x20AC;&#x153;The juvenile whiting take about two years to grow to 27 centimetres, which is legal minimum size. They then leave our bays by

age three to four and complete their adult life in ocean waters. â&#x20AC;&#x153;This type of life-cycle contributes to a highly variable fishery thatâ&#x20AC;&#x2122;s largely dependent on the magnitude of juvenile settlement in the shallows several years prior.â&#x20AC;? Mr Dowling said the recent â&#x20AC;&#x153;terrificâ&#x20AC;? King George whiting fishing experienced by anglers came â&#x20AC;&#x153;thanks to a strong settlement of tiny whiting in 2013 that had now grown and entered the fisheryâ&#x20AC;?. â&#x20AC;&#x153;While we expect good fishing to continue into next summer and autumn, whiting catches will likely drop noticeably by the 2017 summer.â&#x20AC;? The daily bag limit on King George whiting is 20 a person and that they should be landed whole so fisheries officers can measure them if required.

week making the site unworkable. â&#x20AC;&#x153;Once again, [the works] raised the spectre of an industrial open cut mine operating right in the middle of a residential community,â&#x20AC;? Mr Robinson said. â&#x20AC;&#x153;Looking at the bigger picture, we are still asking ourselves how any of the authorities involved could have allowed this situation to happen, given the significant changes to the residential landscape since 1964.â&#x20AC;?

Love rats take a ride ANYONE seeking to meet a potential match online should be aware after cars were stolen earlier in the year. Detective Leading Senior Constable Richard Thomson, of Frankston CIU, said people inviting unknown possible love interests into their homes â&#x20AC;&#x201C; usually at night â&#x20AC;&#x201C; were courting disaster. â&#x20AC;&#x153;The victims are often too embarrassed to come forward after their assignations,â&#x20AC;? he said. â&#x20AC;&#x153;And it looks like itâ&#x20AC;&#x2122;s becoming a little bit more common.â&#x20AC;? In one case in Langwarrin on Sunday 3 January a man arranged to meet a potential love-match in the womanâ&#x20AC;&#x2122;s home before pinching her car keys and stealing the car. It was driven to a house in Somerville where another car was stolen. Detective Thomson said police suspect the car was used to steal cigarettes from a Langwarrin ÂŹliquor store before being set alight. A man police wish to speak with is of southern European appearance, about 173cm, aged 25-30 with a moustache and black hair with shaved sides. Anyone with information can call Crime Stoppers on 1800 333 000 or Detective Thomson on 9784 5555.

with certain TOP-UP hearing aids incorporating the latest generation technology FREE OF CHARGE until the END OF MAY The choice is yours, either a discreet deep canal aid or a miniature receiver in canal aid. In both cases the aids will be small and discreet, and programmed to \RXUVSHFLÂżFKHDULQJOHYHOVDQG unique personal needs. www.hiddenhearing.com.au