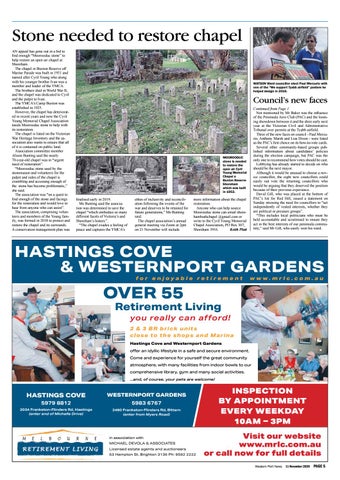 Stone needed to restore chapel AN appeal has gone out in a bid to find enough “Moorooduc stone” to help restore an open air chapel at Shoreham. The chapel in Buxton Reserve off Marine Parade was built in 1951 and named after Cyril Young who along with his younger brother Ivan was a member and leader of the YMCA. The brothers died in World War II, and the chapel was dedicated to Cyril and the pulpit to Ivan. The YMCA’s Camp Buxton was established in 1925. However, the chapel has deteriorated in recent years and now the Cyril Young Memorial Chapel Association needs Moorooduc stone to help with its restoration. The chapel is listed on the Victorian War Heritage Inventory and the association also wants to ensure that all of it is contained on public land. Association committee member Alison Bunting said the nearly 70-year-old chapel was in “urgent need of restoration”. “Moorooduc stone used by the stonemason and volunteers for the pulpit and sides of the chapel is crumbling and accessing enough of the stone has become problematic,” she said. The association was “on a quest to find enough of the stone and facings for the restoration and would love to hear from anyone who can assist”. The association, comprising volunteers and members of the Young family, was formed in 2018 to protect and restore the chapel and its surrounds. A conservation management plan was

WATSON Ward councillor elect Paul Mercurio with one of the “We support Tyabb airfield” posters he helped design in 2019.

Council’s new faces Continued from Page 1 Not mentioned by Mr Baker was the influence of the Peninsula Aero Club (PAC) and the looming showdown between it and the shire early next year at the Victorian Civil and Administrative Tribunal over permits at the Tyabb airfield. Three of the new faces on council - Paul Mercurio, Anthony Marsh and Lisa Dixon - were listed as the PAC’s first choice on its how-to-vote cards. Several other community-based groups published information about candidates’ policies during the election campaign, but PAC was the only one to recommend how votes should be cast. Lobbying has already started to decide on who should be the next mayor. Although it would be unusual to choose a novice councillor, the eight new councillors could easily out vote the returning councillors who would be arguing that they deserved the position because of their previous experience. David Gill, who was placed at the bottom of PAC’s list for Red Hill, issued a statement on Sunday stressing the need for councillors to “act independently of vested interests, whether they are political or pressure groups”. “This includes local politicians who must be held accountable and scrutinised to ensure they act in the best interests of our peninsula community,” said Mr Gill, who easily won his ward.

MOOROODUC stone is needed to restore the open air Cyril Young Memorial Chapel a Buxton Reserve Shoreham which was built in 1952.

finalised early in 2019. Ms Bunting said the association was determined to save the chapel “which embodies so many different facets of Victoria’s and Shoreham’s history”. “The chapel exudes a feeling of peace and captures the YMCA’s

ethos of inclusivity and reconciliation following the events of the war and deserves to be retained for future generations,” Ms Bunting said. The chapel association’s annual general meeting via Zoom at 2pm on 21 November will include

Retirement Living you really can afford! 2 &amp; 3 BR bri c k uni ts c l ose to the shops a nd M ar ina Hastings Cove and Westernport Gardens offer an idyllic lifestyle in a safe and secure environment. Come and experience for yourself the great community atmosphere, with many facilities from indoor bowls to our comprehensive library, gym and many social activities. ...and, of course. your pets are welcome!

INSPECTION BY APPOINTMENT EVERY WEEKDAY 10AM – 3PM Visit our website www.mrlc.com.au or call now for full details Western Port News