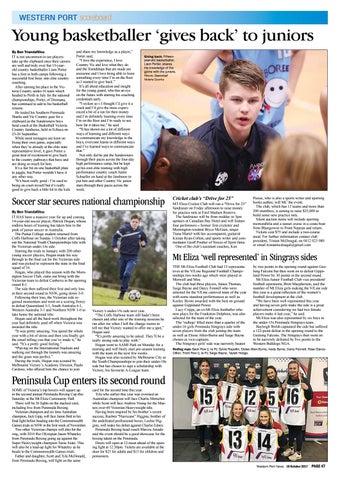 Young basketballer ‘gives back’ to juniors By Ben Triandafillou IT is not uncommon to see players take up the clipboard once their careers are well and truly over but 15-yearold country basketballer Liam Porter has a foot in both camps following a successful first foray into elite country coaching. After earning his place in the Victoria Country under-16 team which headed to Perth in July for the national championships, Porter, of Dromana, has continued to add to his basketball resume. He traded his Southern Peninsula Sharks and Vic Country gear for a clipboard as the Sundowners boys head coach at the Basketball Victoria Country Jamboree, held in Echuca on 23-26 September. While most teenagers are keen on fixing their own game, especially when they’re already at the elite state representative level, it gave Porter a great deal of excitement to give back to the country pathways that have and are doing so much for him. It’s a fair bit on one basketball plate to juggle, but Porter wouldn’t have it any other way. “It’s been really good - I’m used to being on court myself but it’s really good to give back a little bit to the kids

and share my knowledge as a player,” Porter said. “I love the experience, I love Country Vic and love what they do and the friendships that are made are awesome and I love being able to learn something every time I’m on the floor so I wanted to give back.” It’s all about education and insight for the young guard, who has an eye on the future with starting his coaching credentials early. “I reckon so – I thought I’d give it a crack and I’d give the more experienced a bit of a run for their money and I’m definitely learning every time I’m on the floor and I’m ready to see how far it takes me,” he said. “It has shown me a lot of different ways of learning and different ways to communicate my knowledge to the boys; everyone learns in different ways and I’ve learned ways to communicate that.” Not only did he put the Sundowners through their paces across the four-day high performance camp, but he kept up his own elite training with high performance country coach Justin Schueller on hand at the Jamboree to put him and other Country Vic junior stars through their paces across the week.

Giving back: Fifteenyear-old basketballer, Liam Porter, shares his knowledge of the game with the juniors. Picture: Basketball Victoria Country

Soccer star secures national championship By Ben Triandafillou IT HAS been a massive year for up and coming 14-year-old soccer player, Patrick Hogan, whose endless hours of training has taken him to the peak of junior soccer in Australia. The Padua College student returned from Coffs Harbour on Sunday 1 October after taking out the National Youth Championships title with the Victorian under-14s side. Starting the trials in January with 200 other young soccer players, Hogan made his way through to the final cut for the Victorian side and was picked to represent the state in the final squad of 16. Hogan, who played this season with the Mornington Soccer Club, came out firing with the Victorian team to defeat Canberra in the opening round 8-1. The side then suffered their first and only loss in their second round to NSW, going down 3-0. Following their loss, the Victorian side regained momentum and went on a scoring frenzy to defeat Queensland 3-1, South Australia 4-1, Western Australia 3-1 and Northern NSW 1-0 to take home the national title. Hogan said all the hard-work throughout the year had definitely paid off when Victoria was awarded the title. “It was pretty amazing. You spend the whole year with a bit of stress and then you finally get the email telling you that you’ve made it,” he said. “It’s a pretty good feeling.” “Playing on the International Stadium and walking out through the tunnels was amazing and the grass was perfect.” During the trials, Hogan was scouted by Melbourne Victory’s Academy Director, Paulo Cardoso, who offered him the chance to join

MT Eliza Cricket Club will run a “Drive for 25” fundraiser on Friday afternoon to raise money for practice nets at Emil Madsen Reserve. The fundraiser will be from midday to 3pm upstairs at Canadian Bay Hotel and will feature four performers – former Test cricketer and Mornington resident Bryce McGain, singer Tiana Martel with her accompanist, guitarist Kieran Ryan-Colton, and sports writer and commentator Geoff Poulter of Voices of Sport fame. One of the club’s assistant coaches, Ken

Piesse, who is also a sports writer and sporting books author, will MC the event. The club, which has 13 teams and more than 200 members, is aiming to raise $25,000 to build some new practice nets. Silent auction items will include sporting memorabilia and a sunset cruise in a couta boat from Blairgowrie to Point Nepean and return. Tickets cost $75 and include a two-course meal. For further information contact club president, Tristan McDougal, on 0412 025 080 or email tristanmcdougal@gmail.com

Victory’s under-15s side next year. “The Coffs Harbour team still hadn’t been chosen and after one of the training sessions he ran after me when I left the change rooms to tell me that Victory wanted to offer me a spot,” Hogan said. “It’s pretty amazing to be asked. They’ll be a really strong side to play with.” Hogan went to AAMI Park on Monday for a meeting and will likely start pre-season training with the team in the next few weeks. Hogan was also scouted by Melbourne City at the Youth Championships to join their under-18s side but has chosen to sign a scholarship with Victory, his favourite A-League team.

THE Mt Eliza Football Club had 13 representatives at the V/Line Regional Football Championships two weeks ago which were played in Morwell and Moe. The club had three players, James Thomas, Saige Bayne and Darcy Fennell who were selected for the V/Line carnival team of the year with some standout performances as well as Keeley Byrne awarded with the best on ground against Gippsland Power. Lucy Cripps, an ex-Mt Eliza footballer who now plays for the Frankston Dolphins, was also selected for the team of the year. The ‘redlegs’ filled more than a quarter of the under-16 girls Peninsula Stingrays side with seven players from the club joining the team as well as Eloise Allen-Burns and Saige Bayne chosen as vice-captains. The Stingrays girls’ side was narrowly beaten

by two points in the opening round against Geelong Falcons but then went on to defeat Gippsland Power by 30 points in the second round. Mt Eliza Junior Football Club vice president/ football operations, Brett Macpherson, said the number of Mt Eliza girls making the V/Line side this year is a great reflection of the women’s football development at the club. “We have been well represented this year and having seven girls make the side is a great achievement considering we had two female players make it last year,” he said. Mt Eliza was also represented by six boys in the under-15s Peninsula Stingrays team. Bayleigh Welsh captained the side but suffered a 122-point defeat in the opening round to the Geelong Falcons. The Stingrays then went on to be narrowly defeated by five points to the Western Bulldogs NGA.

Peninsula Cup enters its second round SOME of Victoria’s top boxers will square up in the second annual Peninsula Boxing Cup this Saturday at the Mt Eliza Community Hall. There will be 26 fights on the stacked card, including five from Peninsula Boxing. Victorian champion and six time Australian champion, Jack Gipp, will face Jamie Bott in his final fight before heading into the Commonwealth Games trials in NSW in the first week of November. Two other Victorian champs will also hit the ring, with 2016 Rio Olympian Jason Whateley from Peninsula Boxing going up against the Super Heavyweight champion Toese Siuto. This will also be a lead-up fight for Whateley as he heads to the Commonwealth Games trials. Father and daughter, Scott and Tyla McDonald, from Peninsula Boxing, will fight on the same

card for the second time this year. Tyla who earlier this year was crowned an Australian champion will face Charlie Mirtschin while Scott will face Andrew Young for the Masters over-40 Victorian Heavyweight title. Having been inspired by his brother’s recent success, Rueben “Hurricane” Higgins, brother of the undefeated professional boxer, Lochie Higgins, will make his debut against Charlie Edney. Peninsula Boxing head coach Marcos Amado said the event should be a good showcase for the boxing talent on the Peninsula. Doors will open at 12-noon ahead of the opening fight at 12:30pm. Tickets are available at the door for $25 for adults and $15 for children and pensioners. Western Port News 10 October 2017