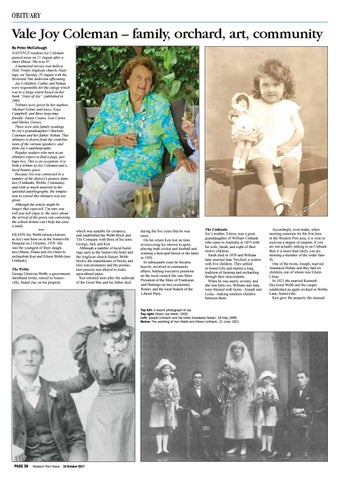 Vale Joy Coleman – family, orchard, art, community By Peter McCullough HASTINGS resident Joy Coleman passed away on 21 August after a short illness. She was 87. A memorial service was held at Holy Trinity Anglican church, Hastings, on Tuesday 29 August with the Reverend Tim Anderson officiating. Joy’s children, Cathie and Rohan, were responsible for the eulogy which was to a large extent based on her book “Days of Joy”, published in 2003. Tributes were given by her nephew, Michael Nolan, and niece, Kaye Campbell, and three long-time friends: Patsie Coates, Lois Carter, and Shirley Davies. There were also family readings by Joy’s granddaughter Charlotte Coleman and her father, Rohan. This obituary is drawn from the contributions of the various speakers, and from Joy’s autobiography. Regular readers who turn to an obituary expect to find a page, perhaps two. This is an exception; it is both a tribute to Joy Coleman and a local history piece. Because Joy was connected to a number of the district’s pioneer families (Unthanks, Webbs, Colemans), and with so much material in her splendid autobiography, the temptation to extend this obituary was too great. Although the article might be longer that expected, I’m sure you will you will enjoy it; the story about the arrival of the green van conveying the school dentist can’t help but raise a smile. *** EILEEN Joy Webb (always known as Joy) was born on at the Somerville Hospital on 2 October, 1929. She was the youngest of three daughters (Marie, Diana and Joy) born to orchardists Ken and Eileen Webb (nee Unthank). The Webbs George Octavius Webb, a government shorthand writer, retired to Somerville, found clay on his property

which was suitable for ceramics, and established the Webb Brick and Tile Company with three of his sons: George, Jack and Ken. Although a number of local buildings such as the Somerville hotel and the Anglican church feature Webb bricks, the manufacture of bricks and tiles was premature and the production process was altered to make agricultural pipes. Ken enlisted soon after the outbreak of the Great War and his father died

during the five years that he was away. On his return Ken lost no time in exercising his interest in sport, playing both cricket and football and winning a best-and-fairest in the latter in 1920. In subsequent years he became heavily involved in community affairs, holding executive positions on the local council (he was Shire President of the Shire of Frankston and Hastings on two occasions), Rotary and the local branch of the Liberal Party.

The Unthanks Joy’s mother, Eileen, was a great granddaughter of William Unthank who came to Australia in 1853 with his wife, Sarah, and eight of their twelve children. Sarah died in 1870 and William later married Jane Twyford, a widow with five children. They settled in Somerville and started a long tradition of farming and orcharding through their descendants. When he was nearly seventy and she was forty-six, William and Jane were blessed with twins - Joseph and Lydia - making nineteen children between them.

Accordingly, even today, when meeting someone for the first time in the Western Port area, it is wise to exercise a degree of caution; if you are not actually talking to an Unthank then it is more than likely you are meeting a member of the wider family. One of the twins, Joseph, married Anastacia Hoban and they had six children, one of whom was Eileen Lilian. In 1921 she married Kenneth Heywood Webb and the couple established an apple orchard in Webbs Lane, Somerville. Ken gave the property the unusual