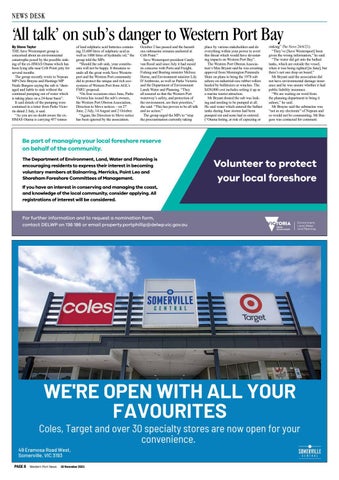 ‘All talk’ on sub’s danger to Western Port Bay By Steve Taylor THE Save Westernport group is concerned about an environmental catastrophe posed by the possible sinking of the ex-HMAS Otama which has been lying idle near Crib Point jetty for several months. The group recently wrote to Nepean MP Chris Brayne and Hastings MP Neale Burgess saying the sub is “damaged and liable to sink without the continual pumping out of water which is taking place on a 24-hour basis”. It said details of the pumping were contained in a letter from Parks Victoria dated 2 July, it said. “As you are no doubt aware the exHMAS Otama is carrying 457 tonnes

of lead sulphuric acid batteries containing 33,600 litres of sulphuric acid as well as 1000 litres of hydraulic oil,” the group told the MPs. “Should the sub sink, your constituents will not be happy. It threatens to undo all the great work Save Westernport and the Western Port community did to protect the unique and rich ecosystems of Western Port from AGL’s FSRU proposal. “On four occasions since June, Parks Victoria has issued the sub’s owners, the Western Port Oberon Association, Direction to Move notices – on 27 June, 2 July, 14 August and 2 October. “Again, the Direction to Move notice has been ignored by the association.

October 2 has passed and the hazardous submarine remains anchored at Crib Point.” Save Westernport president Candy van Rood said since July it had raised its concerns with Ports and Freight, Fishing and Boating minister Melissa Horne, and Environment minister Lily D’Ambrosio, as well as Parks Victoria and the Department of Environment Lands Water and Planning. “They all assured us that the Western Port waterway’s safety, and protection of the environment, are their priorities,” she said. “This has proven to be all talk and no action.” The group urged the MPs to “stop the procrastination currently taking

place by various stakeholders and do everything within your power to avert this threat which would have devastating impacts on Western Port Bay”. The Western Port Oberon Association’s Max Bryant said he was awaiting approval from Mornington Peninsula Shire on plans to bring the 1978 sub ashore on industrial-size rubber rollers hauled by bulldozers or winches. The $450,000 cost includes setting it up as a marine tourist attraction. Mr Bryant denied the sub was leaking and needing to be pumped at all. He said water which entered the ballast tanks during June storms had been pumped out and none had re-entered. (“Otama listing, at risk of capsizing or

sinking” The News 24/6/21). “They’ve [Save Westernport] been given the wrong information,” he said. “The water did get into the ballast tanks, which are outside the vessel, when it was being righted [in June], but there’s not one drop on board.” Mr Bryant said the association did not have environmental damage insurance and he was unsure whether it had public liability insurance. “We are waiting on word from the planning department to bring it ashore,” he said. Mr Brayne said the submarine was “not in my electorate” of Nepean and so would not be commenting. Mr Burgess was contacted for comment.

Be part of managing your local foreshore reserve on behalf of the community. The Department of Environment, Land, Water and Planning is encouraging residents to express their interest in becoming voluntary members at Balnarring, Merricks, Point Leo and Shoreham Foreshore Committees of Management.

Volunteer to protect your local foreshore

If you have an interest in conserving and managing the coast, and knowledge of the local community, consider applying. All registrations of interest will be considered.

For further information and to request a nomination form, contact DELWP on 136 186 or email property.portphillip@delwp.vic.gov.au

WE&#39;RE OPEN WITH ALL YOUR FAVOURITES