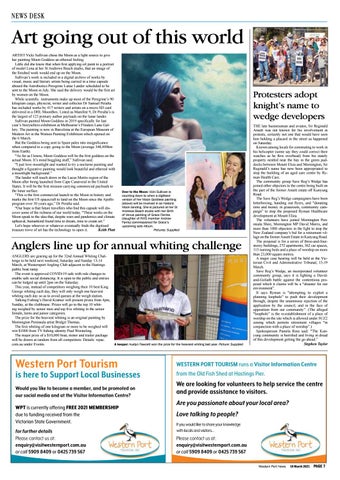 Art going out of this world ARTIST Vicki Sullivan chose the Moon as a light source to give her painting Moon Goddess an ethereal feeling. Little did she know that when first applying oil paint to a portrait of model Lena at her St Andrews Beach studio, that an image of the finished work would end up on the Moon. Sullivan’s work is included in a digital archive of works by visual, music and literary artists being carried in a time capsule aboard the Astrobiotics Peregrine Lunar Lander scheduled to be sent to the Moon in July. She said the delivery would be the first art by women on the Moon. While scientific instruments make up most of the Peregrine’s 90 kilogram cargo, physicist, writer and collector Dr Samuel Peralta has included works by 417 writers and artists on a micro SD card delivered in a DHL MoonBox. Listed as Manifest 9, Dr Peralta’s is the largest of 125 primary author payloads on the lunar lander. Sullivan painted Moon Goddess in 2019 specifically for last year’s Storytellers exhibition at Melbourne’s Flinders Lane Gallery. The painting is now in Barcelona at the European Museum of Modern Art in the Women Painting Exhibition which opened on the 6 March. But the Goddess being sent to Spain pales into insignificance when compared to a copy going to the Moon (average 348,400km from Earth). “As far as I know, Moon Goddess will be the first goddess on the actual Moon. It’s mind boggling stuff,” Sullivan said. “I just love moonlight and wanted to try a nocturne painting and thought a figurative painting would look beautiful and ethereal with a moonlight background.” The lander will touch down in the Lacus Mortis region of the Moon after being launched from Cape Canaveral in the United States. It will be the first mission carrying commercial payloads to the lunar surface. &quot;This is the first commercial launch to the Moon in history and marks the first US spacecraft to land on the Moon since the Apollo program over 50 years ago,” Dr Peralta said. “Our hope is that future travellers who find this capsule will discover some of the richness of our world today. “These works on the Moon speak to the idea that, despite wars and pandemics and climate upheaval, humankind found time to dream, time to create art.” Let&#39;s hope whoever or whatever eventually finds the digitised treasure trove of art has the technology to open it. Keith Platt

Over to the Moon: Vicki Sullivan is counting down to when a digitised version of her Moon Goddess painting (above) will be involved in an historic Moon landing. She is pictured at her St Andrews Beach studio with her Birth of Venus painting of Grace Farriss (daughter of INXS member Andrew Farris) commissioned for Grace’s upcoming solo Album. Pictures: Supplied

Anglers line up for annual whiting challenge ANGLERS are gearing up for the 32nd Annual Whiting Challenge to be held next weekend, Saturday and Sunday 13-14 March, at Westernport Angling Club adjacent to the Hastings public boat ramp. The event is approved COVID-19 safe with rule changes to enable safe social distancing. It is open to the public and entries can be lodged up until 2pm on the Saturday. This year, instead of competitors weighing their 10 best King George whiting each day, they will only weigh one heaviest whiting each day so as to avoid queues at the weigh station. Talking Fishing’s David Kramer will present prizes from 4pm, Sunday, at the clubhouse. Prizes will go to the top 10 whiting weighed by senior men and top five whiting in the senior female, teens and junior categories. The prize for the heaviest whiting is an original painting by Mornington Peninsula artist Bridgit Thomas. The first whiting of one kilogram or more to be weighed will win $1000 from TV fishing identity Paul Worsteling. The major prize of a $10,000 boat, motor and trailer package will be drawn at random from all competitors. Details: wpac. com.au under Events.

is here to Support Local Businesses Would you like to become a member, and be promoted on our social media and at the Visitor Information Centre? WPT is currently offering FREE 2021 MEMBERSHIP due to funding received from the Victorian State Government. for further details Please contact us at: enquiry@visitwesternport.com.au or call 5909 8409 or 0425 739 567

THE late businessman and aviator, Sir Reginald Ansett was not known for his involvement in protests, certainly not one that would have seen him holding a placard in the street as happened on Saturday. Known among locals for commuting to work in his helicopter (some say they could correct their watches as he flew overhead) from his stately property nestled near the bay in the green paddocks between Mount Eliza and Mornington, Sir Reginald’s name has now been appropriated to stop the building of an aged care centre by Ryman Health Care. The community group Save Reg’s Wedge has joined other objectors to the centre being built on the part of the former Ansett estate off Kunyung Road. The Save Reg’s Wedge campaigners have been letterboxing, handing out flyers, and “donating time and money in grassroots, community campaign” to stop the proposed Ryman Healthcare development at Mount Eliza. The volunteers have joined Mornington Peninsula Shire, Mornington MP David Morris, and more than 1000 objectors in the fight to stop the New Zealand company’s bid for a retirement village on the former Ansett Estate in Kunyung Road. The proposal is for a series of three-and-fourstorey buildings, 272 apartments, 362 car spaces, 115 nursing beds and a place of worship on more than 23,000 square metres. A major case hearing will be held at the Victorian Civil and Administrative Tribunal, 15-19 March. Save Reg’s Wedge, an incorporated volunteer community group, says it is fighting a Davidand-Goliath battle against the contentious proposal which it claims will be a “disaster for our environment”. It says Ryman is “attempting to exploit a planning loophole” to push their development through, despite the unanimous rejection of the application by the council, and in the face of opposition from our community”. (The alleged “loophole” is the re-establishment of a place of worship on the site which is allowed under SUZ2 zoning which permits retirement villages “in conjunction with a place of worship”.) Spokesperson Pamela Ross said: “The Kunyung community is horrified and living in dread of this development getting the go ahead.” Stephen Taylor

We are looking for volunteers to help service the centre and provide assistance to visitors. Are you passionate about your local area? Love talking to people? If you would like to share your knowledge with locals and visitors...