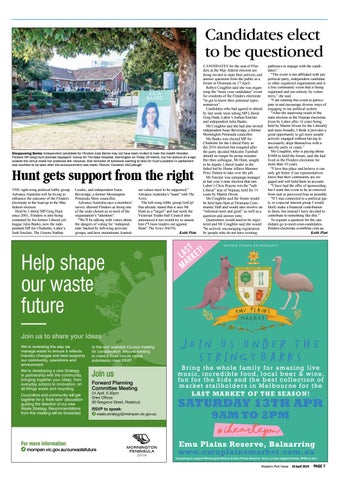 Candidates elect to be questioned

Disappearing Banks: Independent candidate for Flinders Julia Banks may not have been invited to hear the Health Minister, Flinders MP Greg Hunt promise taxpayers’ money for The Bays Hospital, Mornington on Friday 29 March, but her picture on a sign outside the venue made her presence felt. However, that reminder of someone wanting to take Mr Hunt’s position in parliament was nowhere to be seen after the announcement was made. Picture: Cameron McCullough

Hunt gets support from the right THE right-wing political lobby group Advance Australia will be trying to influence the outcome of the Flinders electorate in the lead-up to the May federal election. Held by Liberal MP Greg Hunt since 2001, Flinders is also being contested by his former Liberal colleague Julia Banks, now the independent MP for Chisholm; Labor’s Josh Sinclair; The Greens Nathan

Lesslie; and independent Susie Beveridge, a former Mornington Peninsula Shire councillor. Advance Australia says a members’ survey showed Flinders as being one of the seats chosen as in need of the organisation’s “attention”. “We’ll be talking with voters about the dangers of voting for ‘independents’ backed by left-wing activists groups, and how mainstream Austral-

ian values need to be supported,” Advance Australia’s “team” told The News. The left-wing lobby group GetUp! Has already stated that it sees Mr Hunt as a “target” and last week the Victorian Trades hall Council also announced it too would try to unseat him (“Union leaders out against Hunt” The News 3/4/19). Keith Platt

Help shape our waste future Join us to share your ideas We’re reviewing the way we manage waste to ensure it reflects industry changes and best supports our community, operations and environment.

to the next available Council meeting for consideration. Anyone wanting to make a three minute verbal submission must RSVP.

We’re developing a new Strategy in partnership with the community, bringing together your ideas, from everyday actions to innovation, on all things waste and recycling.

Councillors and community will get together for a ‘think tank’ discussion guiding the direction of our new Waste Strategy. Recommendations from this meeting will be forwarded

CANDIDATES for the seat of Flinders at the May federal election are being invited to state their policies and answer questions from the public at a forum in Dromana on 17 April. Robyn Coughlin said she was organising the “meet your candidates” event for residents of the Flinders electorate “to get to know their potential representatives”. Candidates who had agreed to attend by last week were sitting MP Liberal Greg Hunt, Labor’s Joshua Sinclair and independent Julia Banks. Ms Coughlin said she had also invited independent Susie Beveridge, a former Mornington Peninsula councillor. Ms Banks was elected MP for Chisholm for the Liberal Party at the 2016 election but resigned after the party decided Malcolm Turnbull should no longer be prime minister. Her then colleague, Mr Hunt, sought to be deputy Liberal leader in the failed bid by Home Affairs Minister Peter Dutton to take over the job. Mr Sinclair was campaign manager in last year’s state election that saw Labor’s Chris Brayne win the “safe Liberal” seat of Nepean, held for 14 years by Martin Dixon. Ms Coughlin said the forum would be held 6pm-9pm at Dromana Community Hall and would also involve an “informal meet and greet” as well as a question and answer time. Questioners would need to be registered and Mr Coughlin said she would “be actively encouraging registration by people who do not have existing

pathways to engage with the candidates”. “The event is not affiliated with any political party, independent candidate or other registered organisation and is a free community event that is being organised and run entirety by volunteers,” she said. “I am running this event to participate in and encourage diverse ways of engaging in our political system. “After the surprising result of the state election in the Nepean electorate [won by Labor after 14 years being held by Martin Dixon for the Liberals] and more broadly, I think it provides a great opportunity to get more people actively engaged without having to necessarily align themselves with a specific party or cause.” Ms Coughlin, who is paying about $1000 to hold the forum, said she had lived in the Flinders electorate for more than 10 years. “I love this place and believe it can only get better if our representatives know that their community are engaged and will hold them to account. “I have had the offer of sponsorship, but I want this event to be as removed from real or perceived bias as possible. “If I was connected to a political party or a special interest group I would likely make a financial contribution to them, but instead I have decided to contribute to something like this.” To register a question for the candidates go to meet-your-candidatesflinders-electorate.eventbrite.com.au Keith Platt

join us under the stringybarks Br ing the whole f amily f or amazing live music, incredible f ood, local beer &amp; wine, fun f or the kids and the best collection of market stallholders in Melbour ne f or the LAST MARKET OF THE SEASON!