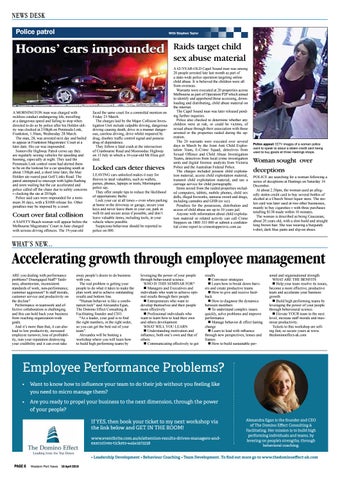 Court over fatal collision A SAFETY Beach woman will appear before the Melbourne Magistrates’ Court in June charged with serious driving offences. The 19-year-old

faced the same court for a committal mention on Friday 23 March. The charges laid by the Major Collision Investigation Unit include culpable driving, dangerous driving causing death, drive in a manner dangerous, careless driving, drive whilst impaired by drug, disobey traffic control signal and possess drug of dependence. They follow a fatal crash at the intersection of Cranbourne Road and Moorooduc Highway on 13 July in which a 16-year-old Mt Eliza girl died.

Locked cars deter thieves LEAVING cars unlocked makes it easy for thieves to steal valuables, such as wallets, purses, phones, laptops or tools, Mornington police say. They offer simple tips to reduce the likelihood of opportunistic thefts: Lock your car at all times – even when parking at home in the driveway or garage, secure your keys and never leave them in your car, park in well-lit and secure areas if possible, and don’t leave valuable items, including tools, in your vehicle where possible. Suspicious behaviour should be reported to police on 000.

Police appeal: CCTV images of a woman police want to speak to about a stolen credit card being used to buy goods at three Hastings shops.

Woman sought over deceptions POLICE are searching for a woman following a series of deceptions at Hastings on Saturday 16 December. At about 2.50pm, the woman used an allegedly stolen credit card to buy several bottles of alcohol at a Church Street liquor store. The stolen card was later used at two other businesses, mainly to buy cigarettes – with three purchases totalling $138 made within 10 minutes. The woman is described as being Caucasian, about 20 years old, with a slim build and straight long brown hair. She was wearing a burgundy t-shirt, dark blue pants and slip-on shoes.

Accelerating growth through employee management ARE you dealing with performance problems? Disengaged Staff? Tardiness, absenteeism, inconsistent standards of work, non-performance, customer aggression? Is staff morale, customer service and productivity on the decline? Performance in teamwork and effective collaboration is challenging and this can hold back your business from reaching organization-wide goals. And it’s more than that, it can also lead to low productivity, increased employee turnover, loss of profitability, ruin your reputation destroying your credibility and it can even take

away people’s desire to do business with you. The real problem is getting your people to do what it takes to make the plan work and to achieve outstanding results and bottom line. “Human behavior is like a combination lock” said Alexandra Egan, The Domino Effect Consulting & Facilitating founder and CEO. “As a leader, your goal is to find the right numbers, in the right order, so you can get the best out of your team”. Alexandra will be hosting a workshop where you will learn how to build high performing teams by

leveraging the power of your people through behavioural science. WHO IS THIS SEMINAR FOR? n Managers and Executives and individuals who want to achieve optimal results through their people n Entrepreneurs who want to develop themselves and their people more effectively n Professional individuals who want to learn how to lead their own and others development WHAT WILL YOU LEARN n Understanding motivation and influence, both one’s own and that of others n Communicating effectively to get

results n Convincer strategies n Learn how to break down barriers and create productive teams n How to give and receive feedback n How to diagnose the dynamics between members n To understand complex issues quickly, solve problems and improve performance n Manage behavior & effect lasting change n Learn to lead with influence through new perspectives, lenses and frames n How to build sustainable per-

sonal and organisational strength WHAT ARE THE BENFITS n Help your team resolve its issues, become a more effective, productive team and accelarate your business growth n Build high performing teams by leveraging the power of your people through behavioural science. n Elevate YOUR team to the next level, increase staff morale and maximise productivity. Tickets to this workshop are selling fast, so secure yours at www. thedominoeffect-ak.com

Want to know how to influence your team to do their job without you feeling like you need to micro manage them?

Are you ready to propel your business to the next dimension, through the power of your people? If YES, then book your ticket to my next workshop via the link below and GET IN THE ROOM! www.eventbrite.com.au/e/attention-results-driven-managers-andexecutives-tickets-44541972238

Alexandra Egan is the founder and CEO of The Domino Effect Consulting & Facilitating. Her mission is to build high performing individuals and teams, by levering on people’s strengths, through behavioral coaching.